Q. What should I EQ to improve my muddy mixes? Skip to main content

Q. What should I EQ to improve my muddy mixes?

I've only really just started getting to grips with EQ and I've come to a stumbling block. I'm working with Apple Logic 8 and am using all of the preset synth and drum sounds, which sound fabulous on their own (no problem frequencies, in other words). However, there are obviously overlapping frequencies between instruments, because things are getting muddy. Given that I have to remove some frequencies from one already perfect–sounding sample to make room for the other, how do I decide which frequencies are expendable? How can I identify which frequencies are causing the problem? For example, if you have a guitar part, obviously you remove the low end, but what frequency bits should you take out in the rest of the waveform? A little bit of the 500Hz range and 1000Hz? How do you know which bits waste headroom? Also, is it best practice to reduce the overall level of an instrument and then raise certain frequencies containing the essential musical parts ('attack', 'body', and so on)? I'm not asking which parts of specific instruments should be removed, but am more wondering how I can identify which parts of a sound are useful or unnecessary. Is it common to have seven or eight steep (high-Q) 'notches' removing a number of frequencies in one instrument?

SOS contributor Mike Senior replies: The first thing to say is that there are no specific frequencies that will always work, irrespective of the instrument concerned, as this kind of EQ use is entirely about the unique context of your mix. The main issue, as you've realised, is how to identify what to cut in each case. 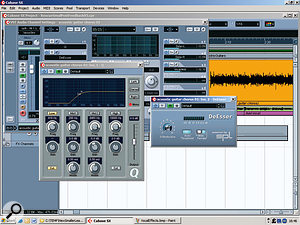 Low frequencies take up much of the headroom in many mixes, so if your bass part is already providing the low–end weight you need, you may find that the low frequencies of any guitar parts, in particular, will serve no useful purpose and can be high–pass filtered to keep the bass part clear.The first thing I'd suggest is to build up the tracks in your mix in order of importance. So if your vocal is the most important sound in the mix, and sounds great on its own, you should be trying to preserve as much of that sound in the final mix as possible. Add in the next most important track, and if it hides anything important in the vocal, that second track needs to be cut with EQ so that it doesn't compromise the vocal. The trick is to mute and unmute the second track while actually concentrating on the vocal sound. This same principle can then be applied as each subsequent track is added in, and hopefully this should help make a lot of your EQ decisions feel more logical. (Incidentally, while it is indeed often sensible to remove low end from guitar parts, this is usually because the bass part is considered more important in this frequency range, but if this isn't the situation in your specific mix, that particular EQ cut is by no means set in stone.)

If you've got a very busy arrangement, this general EQ'ing approach means that EQ will usually become more and more severe as tracks get less important. For very unimportant things, there's sometimes only a very limited frequency range that is relevant to the mix at all, so you might as well cut away everything else to keep the mix clear. The bottom line is that if you bypass the EQ cuts and the sound itself doesn't appear to lose anything important, the stuff you're cutting away is expendable, and getting rid of it will improve the clarity of other, more important instruments in the mix.

Because low frequencies tend to use the majority of the mix headroom, EQ cuts are most frequently concentrated there, and I certainly find the high-pass filter to be my most common EQ choice. However, high-pass filtering can be entirely unnecessary in some mixes, or low shelving might do a more musical job.

Your suggestion of using boosts to bring out the characteristic frequency ranges of different instruments will probably do you more harm than good, in my opinion. For a start, built-in sequencer EQ plug-ins tend to sound better cutting than boosting, but you're also more likely to mislead yourself into thinking an EQ setting is making a sound better simply because it's making it louder.

I don't think very narrow 'notch' EQ cuts are really what you're after here, either, as these tend to be for dealing with specific technical problems, such as reducing mains hum or unwanted drum resonances. If you're already happy with the sounds on their own, very narrow notches may not be really be that useful at all.