Q. What should I look for in a PC laptop? 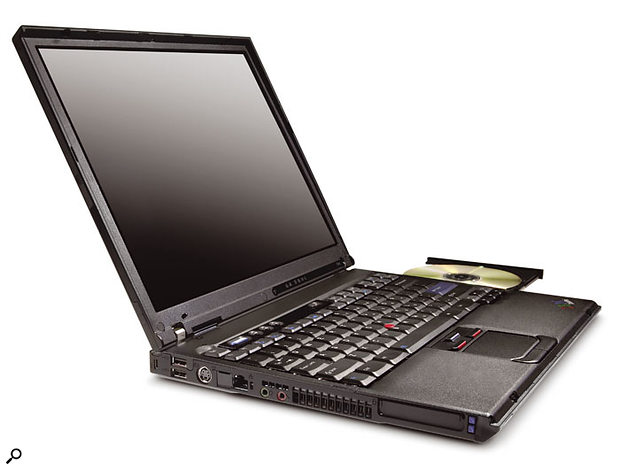 A Centrino laptop, like this IBM Thinkpad, will have a long battery life and produce less fan noise than a standard Pentium 4 machine.

I'm considering moving over from my current Mac setup to a PC laptop for mobile recording, using Nuendo 2 and either an RME Cardbus interface or one of MOTU's Firewire systems. However, with so many different manufacturers and models, I don't really know where to start. Can you point me in the right direction? Is a Centrino laptop the only sensible choice for this kind of application?

PC music specialist Martin Walker replies: When choosing a PC laptop for music it's even more important to get the most suitable model for your requirements than when buying a desktop machine. After all, it's not only likely to be a hefty one-off investment, but also incapable of having any of its chips changed over if you come across an incompatibility with your choice of audio hardware. Audio recording hardware is often picky about which PCs it works with, whether desktop or PC, so make sure you can get a refund if you run into problems with your proposed laptop. RME's Cardbus interface, for instance, is known to be picky about certain Cardbus controller chips, and similar cautions apply to MOTU gear and any piece of high-performance audio hardware.

If you want to buy a specific mainstream model such as one from IBM or Sony then the safest way to proceed is to choose your audio interface, and check with its manufacturer that the appropriate (Cardbus, Firewire, or USB 2.0) laptop controller chip is compatible with it, depending on whether it requires a PCMCIA, Firewire, or USB connection. However, this assumes that you can get hold of details of the chips in question, and while Centrino laptops do all use the same Intel chip for USB 2.0 support, Firewire and Cardbus chips can vary from laptop model to model, as can USB controller chips on non-Centrino models.

Chip details rarely appear in the spec list, but a helpful dealer or a fellow musician who has already bought the same model (such information is often asked for on the SOS forums) might take a peep inside Device Manager to find out the chip makes and numbers for you. However, the safest way to proceed is to buy your laptop from a specialist music retailer who has already checked out these aspects for you, and can guarantee that it will work with a wide variety of music hardware and software.

As for the specification, this depends on what sort of mobile recording you want to do with your PC laptop. If you want the most powerful solution, a desktop replacement model featuring a standard Pentium 4 processor may prove most suitable, since these offer clock speeds above 3GHz, as well as screen options up to 17-inch.

However, such models will almost certainly require mains power, except for short emergency sessions of an hour or less, and will soon get hot and require fan cooling, which may be noisier than you'd like if you want to use microphones a short distance away. Given your two audio interface suggestions I suspect you're intending to record four or more audio tracks simultaneously, and probably require mains power anyway for the interface and mic preamps, so don't rule out this approach.

However, if on the other hand you want to venture into the wilds on battery power with one or two mics then the only real choice is a Centrino, since this will generally provide double the battery life compared with most desktop replacement models (typically two to three hours, depending on how much processor power you're consuming), not get hot, and therefore be almost silent, and generally be half the weight (handy if you're lugging it up a hill in a backpack). The choice is up to you, but a 1.4GHz Centrino will provide similar processor clout to a 2.1GHz standard desktop PC, which should be sufficient for the majority of mobile recording duties.

This presupposes that you're recording live music, but if you ever intend to use your laptop on stage playing back songs with plenty of soft synths and existing audio tracks then go for the fastest processor you can afford in each range. A sensible amount of RAM to partner either laptop is 512MB (unless you intend to run loads of soft samplers, in which case 1GB might be useful), while a typical 40GB hard drive will probably be sufficient for most purposes.

However, if you think you may eventually benefit from a larger drive, it's far more convenient to go for a larger internal drive at the time you buy your laptop than to buy an external USB 2.0 or Firewire drive later on — when recording on the move, the less you have to carry about the better.

This highlights another advantage of buying from a specialist music retailer: you can specify the processor speed, amount of RAM, hard drive capacity, and so on at the time of purchase, rather than opt for the (mostly) fixed specification models offered by mainstream outlets. Remember also that if you have problems running Nuendo or a MOTU/RME interface on a mainstream laptop, and you ask for advice on the laptop manufacturer's tech support line, you're likely to get the reply "Never heard of them". I rest my case.