Q. Where should I put my monitors?

How much distance should there be between my monitors and should they face straight forward or be angled toward the listener? Also, as my monitors will be placed against a wall, should some acoustic foam be placed directly behind or between them? 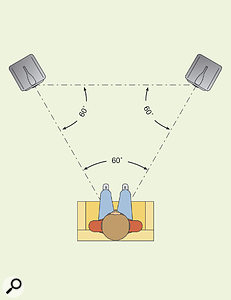 Technical Editor Hugh Robjohns replies: You ideally want yourself and your two speakers to sit at the corners of an equilateral triangle, with your head the same distance from each speaker as the distance they are spaced apart (see diagram) — something between 1 and 2.5 metres (3-8 feet) should be about right, depending on the size of the room and its acoustics. The speakers should ideally be mounted symmetrically in the room, and on rigid stands tall enough to place the tweeters roughly level with your ears. Most monitors are designed to be used in a particular orientation (usually with the tweeter above the woofer), so make sure you place them the right way up. Turning speakers upside-down or on their sides can have disastrous effects on the stereo imaging and frequency response!

Most speakers are designed to be used well away from both side and rear walls, but if you have a choice, it's usually better to put the speakers closer to a back wall, rather than side walls. If placement near walls is unavoidable try to use a speaker with appropriate compensation built in. Most active speakers include some switchable provision for low-frequency correction (such as a specific LF roll-off curve) to suit placement near a back wall or — horror of horrors — in a corner! If you are using passive speakers with a reflex port, you may be able to gain some useful improvement in the low-frequency balance by plugging the port with acoustic foam, although the results are unpredictable and could make the overall sound worse rather than better. If the speakers have rear-firing ports, you'll have to leave a reasonable air gap behind them anyway. Read the manufacturer's handbook for specific advice.

You also need to think about where the speakers are pointing. Although a lot of designs (Genelec monitors, for example) are intended to be aimed directly at the listener — often referred to as a degree of 'toe-in' — many others are designed to face directly forwards into the room so that the listener is effectively placed slightly off-axis to each speaker. Most PMC monitors are designed to be used this way, for example, and if pointed directly at the listener they will sound slightly brighter than intended. This aspect of loudspeaker placement is influenced by the designer's approach to the speaker's horizontal polar pattern or dispersion, and the speaker's off-axis frequency response. Bear in mind that as well as the direct sound reaching your ears, the speaker puts a lot of energy into the room, and that all comes from the speaker's off-axis response.

Beware of early reflections from the walls to either side of the monitors too (and possibly from the ceiling if it's fairly low), as these can also mess up stereo imaging, particularly at mid- and high-frequencies. If you can't avoid placing your monitors near side walls, consider putting acoustic foam tiles or even the ubiquitous duvets on the side walls between the speaker and listening position to absorb those reflections. You can determine the best place for the absorbers by getting someone to move a mirror around on the wall (or ceiling!) While you sit in the listening position. When you can see the speaker's tweeter in the mirror, that's the place to centre the acoustic absorber.