Q. What should I use to record my gigs? 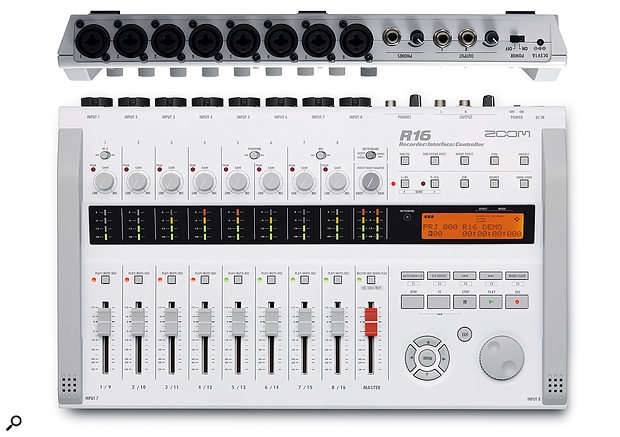 Trying to capture a gig in stereo is risky, but a multi-mic setup based around a computer or phone and audio interface can be clumsy if you’re capturing a number of sources. In this scenario, a portable recorder such as the Zoom R16 (pictured), with its eight mic/line inputs, might be a better option.

I’m an amateur double bass player and eager reader. While playing gigs, I usually record my band with an Apogee Quartet attached to an iPhone, recording four tracks on Harmonicdog’s Multitrack DAW: one track for drums, with an AKG C2000B mic placed between snare and bass drums (and pointing at the space between them), one for the guitar amp, close-miked with an Oktava MK-012-01, a channel for the bass DI (blending a DPA d:vote for bass with a piezo pickup), and another Oktava plugged into the fourth channel, miking the voice monitor (the guitar player and drummer also sing).Recording from the Quartet straight to my phone is convenient but I struggle with the small number of channels. I was intrigued by your Cowboy Junkies article (http://sosm.ag/classic-tracks-cowboyjunkies) because of the idea of recording gigs binaurally, and hence with the whole band on two channels. That would leave me two spare channels for the main vocals and maybe bass DI, for safety. Would you recommend exploring this further?I’ve also been looking into the idea of raising the track count by using the Quartet’s ADAT input, yet all ADAT preamps/converters are bulky, rackmount units, which make the whole setup less convenient. I wouldn’t need eight additional channels — four, or maybe just two, would do, but there’s not such a thing on the market. Given that I wouldn’t carry an Apogee Ensemble and laptop to my gigs (due to the risk of them being stolen), are there options that would give me a few more channels?

SOS Features Editor Sam Inglis replies: Recording a complete ensemble performance using any stereo technique is difficult — it is, if you like, the highest art of sound recording! As you’ll have learned from the Cowboy Junkies article, it took Peter J Moore many hours to arrange the microphone and the musicians so as to capture an acceptable balance, and in that situation the sound engineer was not part of the band, there was no audience, and the venue had been chosen specifically for the purpose. If you try to achieve the same at a typical gig, it would require a lot of luck to get good results, regardless of whether you’re using a Soundfield mic, a binaural array, or any other technique.

A better option might be to use a stand-alone digital multitrack recorder. I have a Zoom R16, which I sometimes use for gig recording: the quality of the preamps and analogue circuitry is not amazing, but it can record eight tracks at once, it’s simple to use and portable, and it runs off battery power. Oh, and it also has a pair of built-in mics that will give you a stereo capture (though I’ve not always found this very useful in practice). As it records onto SD cards, you can boot it up in card-reader mode when you get home and dump the files onto a computer for mixing. Zoom offer a number of other suitable devices, such as their R24 and their F8, which we reviewed last month (http://sosm.ag/zoom-f8), and other options are available from the likes of Tascam and Boss.