Q. What is a speaker's crossover frequency? 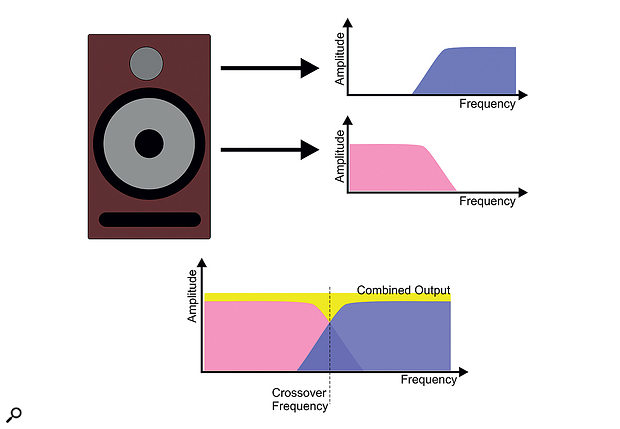 A speaker's crossover filter determines what frequencies are sent to which driver.

What exactly is the crossover frequency in studio monitors, and how much attention do I need to pay to that spec?

SOS Technical Editor Hugh Robjohns replies: Most monitor loudspeakers use two (or more) separate loudspeaker drivers, because it's almost impossible to make a single driver that can cover the full 10-octave audio frequency range with the kind of accuracy and power-handling that is typically required. So it's common for a monitor loudspeaker to have at least two drivers: a 'woofer' or 'bass-mid' driver, which handles the lower frequencies, and a 'tweeter' to handle the higher frequencies. This would be called a 'two-way' monitor speaker, but there are also designs with three drivers (three-way) and more.

Whatever the configuration, it's usually necessary to send only the appropriate frequencies to each driver, and so a 'crossover' is required. Essentially, this is a set of complementary high- and low-pass filters. For a two-way design, one filter (a high-pass) allows only the higher frequencies through to the tweeter, and another (low-pass) routes only the low frequencies to the woofer.

The 'crossover frequency' is where these two filters overlap (see diagram). Typically it will be somewhere between 1 and 3 kHz, but the actual crossover frequency is broadly dependent on the physical size of the tweeter — that determines its power handling and the lowest frequencies it can reproduce — although many other design parameters are taken into consideration.

In a two-way system the crossover point often ends up right in the middle of the critical vocal frequency range, and since both drivers are inherently reproducing the signal through the crossover region this can result in some unwanted artifacts, especially if listening off axis. A three-way speaker system avoids this problem as the two crossover regions can be set below and above the critical vocal range.