Q. What cable do I need to connect an RME ADI-4DD to a TC Electronic Reverb 6000? 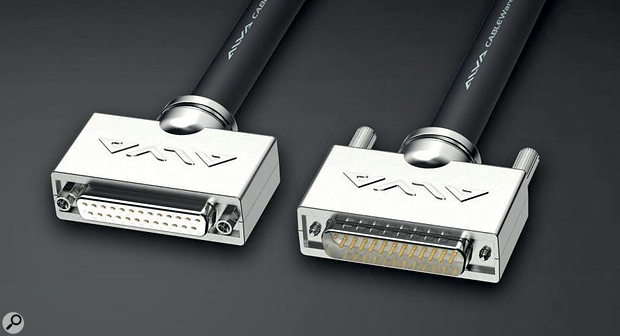 Alva make a 0.5m Yamaha-to-Tascam format D‑sub cable, but it needs to be connected to a D‑sub snake to plug in to the RME ADI-DD.

I'm trying to get an old TC Reverb 6000 MkI connected digitally to my new UAD‑Apollo x8 interface to give me four stereo reverb engines. However, the TC6000 has a 25-pin D‑sub AES3 connector, which I believe is wired in Yamaha format while the Apollo x8 has dual ADAT Toslink connectors, which I understand can support eight channels up to 96kHz if used together. I intended to use an RME ADI-4DD AES-to-ADAT digital format convertor box, which I remember you have previously reviewed. The RME's 25-pin D‑sub AES3 connector conveniently has an internal jumper which can be changed to swap between different formats, including Yamaha. So, if I change the internal jumper on the RME to the Yamaha D‑sub format, what sort of cable do I need?

SOS Technical Editor Hugh Robjohns replies: Yes, the original TC Electronic Reverb 6000 did indeed use the Yamaha (YGDAI) format for its eight-channel AES3 connector, and the RME ADI-4DD would make an ideal format converter for this situation; I use one myself for this purpose too.

However, to use the RME's D‑sub port in the Yamaha format, you'd require a D‑sub-to-D‑sub cable wired to the Yamaha format at both ends, and I can't find any commercially available off-the-shelf options any more.

Of course, you could have one custom made, but if you were going to do that it would probably make more sense to have it wired as a converter cable (Yamaha-to-AES59/Tascam format) anyway, and leave the RME box in its default AES59/Tascam setting. There are plenty of companies online who could build a suitable custom cable like this.

If you'd rather buy off-the-shelf standard cables instead, I'd support RME's recommendation of using Alva's digital cables. Alva make a short (0.5m) Yamaha-to-Tascam converter cable which is used as an extension to one of their standard AES59/Tascam-format D‑sub-to-D‑sub cables (available in 1, 3 or 5 metre lengths). I use Alva cables a lot (including Yamaha converter cables) and find them to be both reliable and very good value. This one has the male Yamaha connector, which you can plug into the Reverb 6000, but a female Tascam connector at the other end. You need a male Tascam connector to plug into the ADI-4DD's D‑sub. If the units are close by, a simple D‑sub male-to-male gender changer would be the least expensive way to do that, but it might be a bit cumbersome hanging off the back of the RME. Probably a better option then is a regular D‑sub-to-D‑sub cable. You can then run Toslink optical cables to the Apollo interface.

In an extended digital system like this, clocking is important. Although you could use the Toslink connectors to provide clocks, I'd recommend using a BNC cable from the Apollo's word-clock output to the RME's clock in, configuring the Apollo as the lead clock and the RME as a follower. The Reverb 6000 should be configured to follow the clock of its AES inputs.