How To Choose An Audio Interface

Understanding What's Important To You By Sam Inglis 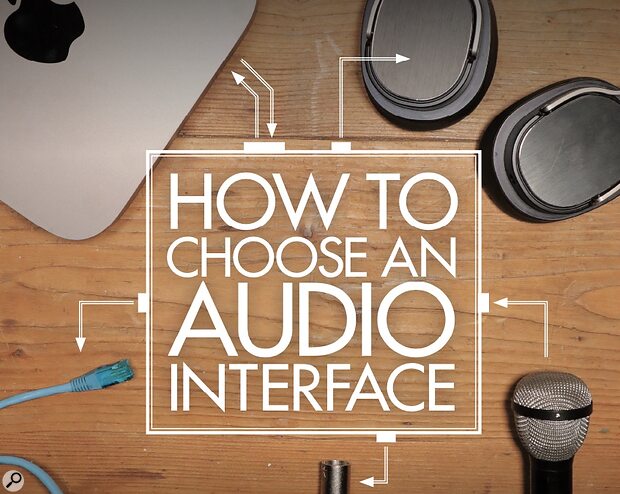 The audio interface is at the centre of every modern studio, but how do you choose the right one for you?

Thirty years ago, control rooms contained big mixers and racks of audio processing equipment. Today, the computer is the cold robot heart of the studio, and software has replaced the console and outboard. This change means that one piece of equipment has become indispensable. You can't run a computer-based studio without an audio interface — but how do you know which interface is right for your computer-based studio?

Getting sound into a computer is a two-stage process. First, an analogue signal is converted to a stream of numbers. Then this stream of numbers is fed into the computer. This second stage is the core function of an audio interface, but nearly all of them do both. 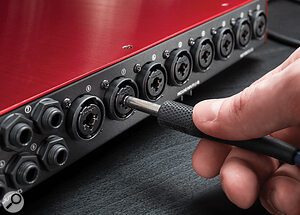 Many interfaces use space-saving 'combi' input sockets that can accept either an XLR cable from a microphone, or a line input on quarter-inch jack.In other words, most interfaces can accept analogue signals directly. What's more, they can often take two different types of analogue input. A 'line' input expects signals at a standard studio level such as is generated by synthesizers, mixers or mic preamps. However, we also want to plug microphones and electric guitars directly into our audio interfaces. These put out feebler and less predictable signals, which have to be preamplified before they can be digitised. Most project-studio interfaces thus feature analogue inputs with mic preamps and/or sockets to plug a guitar into. Often, you'll find dual-purpose sockets which combine an XLR for mic input and a quarter-inch jack for line input.

So one of the most basic questions to ask yourself is: how many analogue inputs do I need, and of what type? As a first step towards answering this question, count up the number of sources you're going to want to connect simultaneously. If you only ever record yourself, you might only need one or two inputs, even if you're building complex tracks by overdubbing. If you record bands live, you may require enough inputs to cover a multi-miked drum kit, several other instruments and vocals.

In a studio where the audio interface is the only item of hardware, you'll need it to have as many mic preamps as you're ever likely to want to connect mics. But if you plan to use your audio interface with a hardware mixer, or you only ever record synths, or you have other equipment already that can amplify the signals from your mics, you might well prefer to get an interface that has only line-level I/O. 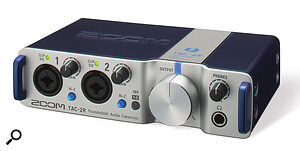 Preamp gain is most commonly adjusted using an analogue potentiometer.

Some interfaces allow preamp gain to be controlled digitally, which offers increased precision as well as recallability.This only gets us so far, because there are a lot of audio interfaces that seem to offer identical analogue input facilities. If you have to choose between several models with the same features, you should also consider the following:

Audio interfaces perform a comparable two-stage job at the 'back end' of the system, spitting digital audio out of the computer and turning it into an analogue signal. The most basic reason for this is so that we can connect speakers or headphones to hear sound coming out of it! Nearly all interfaces therefore feature at least one pair of line-level outputs and at least one stereo headphone socket. 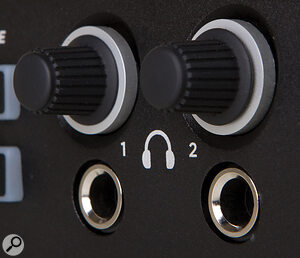 For recording more than two musicians at once, you'll thus need a dedicated multichannel headphone amp. This, in turn, will need to be fed from its own pair of line-level interface outputs. Bear in mind, too, that unless you have an outboard monitor controller with built-in speaker switching, you'll also need a separate pair of line-level outputs for each pair of speakers you have.

Remember, also, that outputs aren't only used to feed monitoring systems. To integrate hardware compressors or equalisers into your software mixes, you'll need line-level outputs to feed them and line-level inputs to receive the processed signal. The same goes if you want to mix on an analogue console.

Once again, considering only the raw numbers will probably leave you considering lots of interfaces with the same basic output arrangement. If so, it's time to ask yourself some more detailed questions that will help you find the most suitable interface for your needs.

Monitor control features on audio interfaces vary considerably. If your interface doesn't offer features such as speaker A/B switching, talkback and mono, you may need to budget for an additional hardware monitor controller.

A little research into larger interfaces will reveal that once you get beyond eight mic inputs, your options narrow dramatically. Yet eight mic inputs is not enough to track a band. What if you need 12, 16 or even more mic inputs?

One option is a mixer that incorporates an audio interface. Products like the Zoom L‑12 and L‑20, Behringer's X series, the Tascam Model 16, Soundcraft's UI mixers, PreSonus's StudioLive consoles and the QSC TouchMix‑30 Pro provide lots of inputs, and can take care of live sound and cue mixing as well as recording. They can be excellent choices for people who work primarily with bands, but there's a lot of variation in the features on offer. A detailed comparison is outside the scope of this article — but very much within the scope of Chris Korff's 'Digital Mixers In The Studio' article elsewhere in this issue!

A second option is to attach more than one audio interface to your computer. Usually, this means buying two interfaces from the same manufacturer, and even then, multiple working is hardly ever supported on USB audio interfaces. Interfaces that can be connected in multiples usually do so using Thunderbolt ports or PCIe slots; not every computer has these, and interfaces that exploit them tend to be more expensive than USB equivalents.

Fortunately, there's a third option: adding more analogue inputs to an existing interface. Interfaces often provide more paths to the computer than they have analogue inputs. These paths are fed by digital inputs, which can accept signals already converted to digital data by some other device. Indeed, some interfaces only offer digital inputs, the idea being that users can assemble a bespoke system by choosing their converters separately.

Digital audio can be encoded electrically, but it can also be represented optically, using pulses of light. The key point is that the encoding scheme and the physical medium are independent of one another. The most common optical connector is thus used for two different, incompatible types of digital audio data — one of which can also be sent over an electrical wire! That data type is S/PDIF.

Connecting an optical or electrical S/PDIF cable from the output of one device to the input of another will carry two channels of digital audio between them. However, the same cables that carry optical S/PDIF signals are also used for a multichannel format known as ADAT or Lightpipe. If you're working at the standard 44.1 or 48 kHz sample rates, a single Lightpipe connection can carry eight channels of digital audio in one direction. In the project-studio world, this makes it ideal for affordably expanding an audio interface, and there are lots of rackmount units on the market that offer eight channels of analogue-to-digital conversion with ADAT connections.

Beyond the project-studio world, you'll find many other digital formats, most of which need not concern us here. Assuming your expansion plans are centred around ADAT and/or S/PDIF, there are a few considerations to bear in mind: