Q. What's the best setup for processing while recording? Skip to main content

Q. What's the best setup for processing while recording?

I have a question about setting up a channel strip in a home recording environment. I have an SSL XLogic Superanalogue channel running into an M-Audio Project Mix interface via the S/PDIF input and, although I realise that I should record clean and process after, I want to use this relatively high-end device for EQ, gating and compression at source.My question is what is the best way to set the EQ? Recording through a microphone, I obviously can't monitor the result through the main monitor speakers because of feedback, and using headphones will give a coloured result. I have thought about running a clean recording of, say, an acoustic guitar through the input and adjusting the unit to hear the result — is this workable? 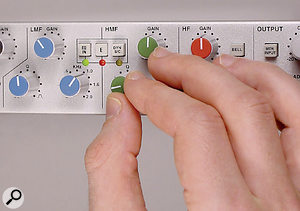 If you feel confident about the processing you need, there's no reason not to apply it directly to the source signal.

SOS Technical Editor Hugh Robjohns replies: First, there are no hard and fast rules about processing (or not) on the way in. Back in the days when we had to record to tape, it was often beneficial to process the signal before recording, compressing the dynamic range to get the quieter performance elements well above the relatively high noise floor, and boosting the HF to compensate for inherent tape losses.

With modern 24-bit converters, we no longer have to compensate for the deficiencies in the recording chain, and recording 'flat' means that the raw performance is captured on the hard disk, leaving all your options open for processing as you build the mix.

However, if you are confident about what processing is needed, there's no reason not to apply it directly to the source signal: just remember that you can't undo it afterwards! A lot of engineers still do 'pre-process', in fact, simply because it's a faster way of working, they have the experience and confidence to know what will be needed, and they aren't afraid to make critical decisions early.

Your main concern seems to be hearing what you're doing when performing and adjusting the SSL channel strip. Decent headphones should let you hear the processing without the sound being coloured, but few people could give a decent performance at the same time as analysing and tweaking the channel strip!

Ideally, a trusted friend with good ears would set up the processing while you performed, but then you would have to live with their EQ and compression decisions rather than yours! The only way I can see this working in a self-operating capacity is if you record a test vocal track 'flat', then route that recording back out to the SSL channel strip's line input, and process the raw mic signal as you want. Effectively, you would be 're-amping' the vocal track, but using the channel strip's analogue processes to shape the sound, rather than a guitar amp!

You could then simply re-record that processed vocal and use it in your mix, but that means additional conversion stages and probably some time-shifting because of the converter latency. However, it may be that once you've alighted on optimal settings for EQ and compression that suit your voice, you could then record a new performance directly through the SSL, avoiding the additional conversion stages. And, if all your vocal performances are similar, once you've found the optimum SSL settings you could record all future vocals through the channel strip, without worrying about further fine-tuning. The only critical setting would be the input gain!