Q. Is there a simple way to play a VST instrument without a DAW? Skip to main content

Q. Is there a simple way to play a VST instrument without a DAW?

I recently bought a digital piano. It was mainly to learn piano, but also as a controller to use with Omnisphere. I really did think it would be as simple as installing the discs, connecting the keyboard by USB to my PC and then synthesizing away.I thought I didn't need anything else and that I could get to grips with DAWs at a later date, but clearly I was wrong! So my question is: what is the simplest — ie. most idiot-proof — way of getting sound from Omnisphere on my PC that won't require too much technical ability and know-how? 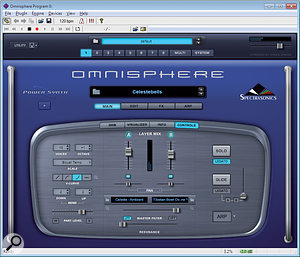 This is Spectrasonic's Omnisphere running as a stand-alone soft synth inside Herman Seib's excellent Savihost utility. Savihost is one of the simplest VST hosts, as well as being a valuable test tool.

SOS contributor Martin Walker replies: To use a plug-in like Omnisphere without a DAW, you require a host application capable of loading VST instruments. Examples of suitable 'full-featured' hosts include Ableton Live, Cubase, GarageBand, Logic and Reaper. Developers do get occasional complaints from users if they don't provide a standalone version of their software instruments as well as the plug-in version, but there's really no need for them to take the time, trouble and expense of creating their own stand-alone application when so many simple host utilities are also already available to let you run any VST instrument in stand-alone mode.

Savihost is probably the simplest to use of all of those listed above. It was created for the sole purpose of automatically loading only one VSTi, is extremely quick to load, is light on system resources, is available in both 32-bit and 64-bit versions to suit whichever format of soft synth you're using, and also supports ASIO drivers for low latency during performance. You just unzip the Savihost file into the same folder as the DLL file for your VST instrument (in this case Omnisphere.dll), then rename the file Savihost.exe to the name of your instrument (so, in this case, Omnisphere.exe).

Finally, double-click on this renamed file and your instrument will appear in all its glory. Just use Savihost's Devices menu to choose your MIDI input device and audio output device and you can start playing it. Even if you don't have a keyboard controller on hand, you can download a different version of Savihost including its own software version that you can play with your mouse.

I've used Savihost myself on quite a few occasions over the years, and not only for playing soft synths as stand-alone applications. It's also a very useful tool if you have any problems running a particular soft synth in a DAW, since you can use it to check that the synth is installed and running correctly without all the extra paraphernalia associated with sequencers, editors and so on. As before, just drop the Savihost file into the same folder as the problem synth DLL, rename it and then double-click on it. If the synth works properly in Savihost, any problem is most likely to be with your DAW. The other advantage of the renaming process is that you can have several instances of Savihost in one 'vstplugins' folder, each launching a different stand-alone synth.