I'm a bit behind on my reading; I just finished Mike Senior's article on recording the band 'Impossible Colours' in the April issue's Session Notes (/sos/apr13/articles/session-notes-0413.htm) and I'm confused about a couple of things. I couldn't find the reason why the author went through the convoluted process of placing hanging baffles on the drums, as well as using the overhead miking approach, when the only thing that was needed was to DI the bass and re-amp later, or even just place the bass amp outside in the hallway and close-mic it there. Instead, he had to contend with drum spill on the bass track and bass spill on the drums, and the weirdness of the cymbals not picking up early reflections from the room, as well as the lack of room ambience mics that could have gelled it all better. 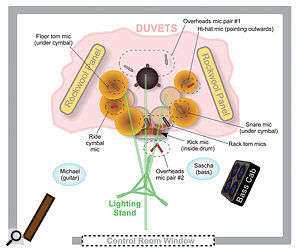 As there wasn't a particularly great 'sound' to the room that was being used to record, it was decided to use baffles to eliminate room sound from the drum recording altogether.He also placed the guitarist in the control room with headphones and an amp modeller, so the rest of the guys were listening to the foldback mix too, and could just have used that for cues. Maybe I'm missing something, but wouldn't reserving the tracking room only for the kit make more sense?

SOS contributor Mike Senior replies: If my main reason for the drum baffling had been to stop crosstalk between the bass and the drums, I agree that my setup would have been a bit odd! However, in this case the drum baffling was primarily designed to eliminate the room sound from the drums. Normally, I'm a big fan of room ambience on drums for exactly the reasons you mention (ie. gelling the ensemble), and I do try to use it wherever possible — for example, in the Dunning Kruger session I wrote about in Session Notes October 2012 (/sos/oct12/articles/session-notes-1012.htm). In this instance, though, the room frankly didn't sound good; it was small and sounded boxy. Also, I knew that the band had referenced some super-dry records, and I wanted to give us the option of achieving that dryness without having to bring in samples, if possible. Samples are alright if you're just replacing a backbeat, but can be really fiddly where the playing is more nuanced and jazz-influenced, as Miko's (the drummer) was.

The issue of whether to have a bass cab in the room with the drums was actually an independent consideration, and mostly a question of creating a situation where the musicians could perform and communicate more naturally. Ideally, with new bands I like to use a setup very much like their rehearsal or performance layout: all the musicians in the same room with their instruments and amps, hearing each other naturally without any headphones. On this occasion, a couple of practicalities tempered this preference. Firstly, the drummer wanted a click track, so there had to be some headphones for him; and secondly, we wanted the flexibility to overdub and replace the guitar parts without losing a great rhythm take, which meant that the guitar sound couldn't be live in the room. There was, however, no practical necessity to remove the bass cab from the room, so I preferred to leave it in there. This meant that Chacha (the bassist) and, indeed, the other band members, were able to 'feel' the low end of his cab in a way that's impossible when monitoring bass over headphones. Had I removed the amp from the room to the corridor, I think we'd have lost some of the vibe from the whole tracking session, and I suspect the performances might not have been as good. Besides, as it happened, recording out in the corridor wasn't really an option, for Neighbourhood Watch reasons, otherwise I'd have already taken advantage of it to mic up the guitar parts!

With regard to your comment about the placement of the guitarist and having the guitar sound through headphones only, I think there's a little confusion here. Firstly, the guitarist was actually in with the rest of the band, despite his sound appearing only in the headphones. That meant he could perform to the real sound of his colleagues, rather than a headphone mix of them; that the visual interaction between the players was improved (guitarist David is also something of a band leader); and that they could all discuss things between takes without any need for talkback complications. Secondly, the rest of the players were only hearing the guitar in their headphones, not bass and drums. The cans were just supplementing what everyone was already hearing in the room. If I'd cleared the drum room exclusively for the drummer and drum kit, everyone would have had to have a full headphone foldback mix, and in my experience bands don't tend to find it as natural or inspiring to play together in this way.

You also ask if it wouldn't have made sense to reserve the tracking room only for the drum kit. For the engineer, yes it would, but not for the performers, in my experience. While I'm a pragmatist in terms of trying to create a recording setup with enough production and mixdown flexibility to fulfil the band's musical goals in the most efficient manner, for me it's still the performances that provide the real magic when tracking. This is why I was happy to put up with a bit of bass spill and, indeed, why we decided to keep some of the tracking session's more inspired 'scratch' guitar solos at mixdown.