Do you have any pointers on making a great sub‑bass synth sound to underpin bass lines? It seems to be one of those things that's hard to get wrong but, at the same time, difficult to get bang on the money. Should I use sine, square or triangle waves? How steep a filter should I use, and at what frequency should I set it? I've used sub‑bass synths with varying degrees of success, so I'd be interested in any handy hints.

SOS contributor Mike Senior replies: Sub‑bass synth parts can operate in very different ways, so it's difficult to generalise. The simplest application is where you double your tune's bass line at the octave below using a simple sine‑wave synth patch. In this case, there's nothing much to do other than set the synth's level and have a listen to it in solo, just to check that the synth's envelope settings aren't so fast that they create unwanted clicks. Because a sine wave is effectively only a single frequency, and that frequency doesn't overlap the main bass part's range in this scenario, there's no need to filter the sub‑bass synth at all.

Things get more complicated if you're using a sub‑bass synth to try to beef up the existing fundamental frequency of your bass part, because the sub-bass synth, therefore, overlaps the main bass part's frequency range. The problem is that if the peaks and troughs of the 'sub' synth's waveform don't track those of the existing bassline's own fundamental frequency component, the combination can actually end up sounding less bassy than before! And because the relationship between these two sets of waveform peaks will usually change from note to note, you may end up with a very uneven low end that's all but impossible to balance with the rest of your mix. If the existing bass sound's fundamental frequency is weak enough, by comparison, with the added sine wave, this effect may not be significant enough to be a problem, but if you do get into difficulties you need to try to get rid of the original sound's fundamental frequency, in order to clear the field for the sub‑bass synth at the low end. A steep high‑pass filter on the main bass part is one solution, but at times you may need to use the more surgical approach of notching out individual fundamental frequencies with narrow‑peaking EQ cuts. A high‑resolution spectrum analyser may help, or you could, alternatively, plug the bassline note names into the note‑to‑frequency calculator at www.muzique.com/schem/freq.htm, in order to find approximate notch frequencies. Again, though, filtering the sub‑bass synth won't help at all in this case. 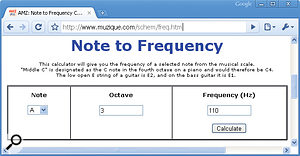 In some cases it makes sense to eliminate, very precisely, the fundamental frequencies of your main bass part, to avoid troublesome conflicts with an added sub-bass synth part. If you find yourself in this position, a note‑to‑frequency calculator, such as this one at www.muzique.com, can save a lot of time by identifying the EQ frequencies you need.

The point at which filtering becomes an issue is when you're wanting to round out the overall low‑end tone of the bass sound, rather than just adding a sub‑octave or emphasising the existing fundamental. A sine‑wave sub‑synth won't help you here, because you want a waveform that has some harmonics in addition to its fundamental frequency. I like using a triangle wave instead of a sawtooth or square most of the time, because it seems to be better at blending with (rather than overwhelming) the sound it's layered with. The triangle wave doesn't have such dense harmonic spacing as a sawtooth, and is duller‑sounding and less characterful than a square wave.

Whatever waveform you use, though, you still need to take exactly the same precautions with the sub‑synth's fundamental frequency as you do when using a sine wave. I'd also steer clear of detuned multi‑oscillator patches, because the 'beating' between the two detuned layers may cause the sub‑synth's fundamental frequency to fluctuate unacceptably in level. Stick with mono patches too, because low‑end stereo width can reduce the power and consistency of the bass sound in mono, and will also interfere with vinyl pressing if you're planning to take that route. These restrictions mean that you only really need a very simple instrument to generate sub‑synth parts. For the 'Mix Rescues' I do in Cockos Reaper, even that sequencer's no‑frills little ReaSynth instrument is over‑specified, and I've used that as a sub‑bass synth on numerous occasions.

The decision as to whether to filter the sub‑synth is purely a question of what kind of low‑end tonal enhancement you're looking for. With a triangle wave, in particular, you might not feel any need to filter it at all, although I do personally find myself employing some kind of low‑pass filter to restrict its input to the lower octaves in most cases. The slope of the filter is typically quite critical, though, so if you can find yourself something with a variable roll‑off slope, that does give you a useful amount of extra control. However, I wouldn't use a resonant filter in this kind of application unless that filter is set to track the synth oscillator's pitch, otherwise the filter's resonant peak ends up boosting different harmonics as the note pitches change, and this makes the sub‑bass synth less likely to blend consistently with the main bass part.

One final point to make is that sub‑bass synth parts usually need to be controlled quite tightly in terms of dynamic range, or else they can really eat into your track's overall headroom. It's also usually sensible to avoid having a sub‑heavy kick sound when there's a prominent sub‑bass synth underpinning the bass line, for similar reasons. There's only so much space down there, so if you want massive, subby bass, you either have to sacrifice some of the kick's weight or turn down the overall level of your track to accommodate the low‑frequency build‑up.