The dome of the tweeter on one of my M-Audio Studiophile BX5 monitors has somehow got pushed inwards. Does this cause permanent damage? If it's advisable, how should I go about pulling it back out? Someone told me to use some sticky tape, but I'm concerned that this could do further damage.

Technical Editor Hugh Robjohns replies: I'm afraid to say that if a soft-dome tweeter has been pushed in, it will already be creased, and that will result in increased distortion compared with an original unit. This structural damage cannot be repaired, although you can improve the looks of the thing by drawing the tweeter dome back out. 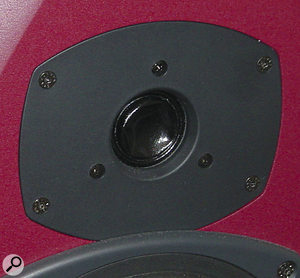 While it may be possible to draw this pushed-in tweeter dome back out, its performance will be permanently compromised.Whether you can hear this damage or not depends on several factors, not the least being the quality of the original tweeter. For some, repairing the looks of the tweeter will be sufficient, but the only real way to get the original performance back is to replace the tweeter, and ideally the one in the other speaker too, so that they both will be the same age and have the same specifications. It's best to approach the speaker manufacturer directly for replacements, quoting the serial numbers of your speakers, so that they can check their production records and supply new tweeters of the correct sensitivity. This is often something that varies from batch to batch and so the speaker crossovers have to be tweaked slightly during manufacture to maintain correct overall performance.

If you can't replace the tweeter, then you might be able to restore its shape and some of its original performance. Bear in mind, though, that the coating on the tweeter dome is delicate, and trying to pull it out by sticking tape or Blu-Tac to it is a daft idea in my opinion. Such techniques will either pull off parts of the coating (making the situation even worse) or leave residues behind (ditto).

A better way of restoring the shape of the dome is to use a vacuum cleaner, because it is a non-contact approach. This is what we did to provide a temporary fix for a damaged tweeter in a Studio SOS visit in the October 2002 issue. By carefully reducing the air pressure in front of the tweeter using the hose from the vacuum, the pressure of air behind the tweeter forces its shape back out in a fairly gentle way. Obviously, it involves a strong and steady hand to avoid the vacuum cleaner nozzle coming into contact with the tweeter in any way, but, provided that you are careful, this technique can be effective.