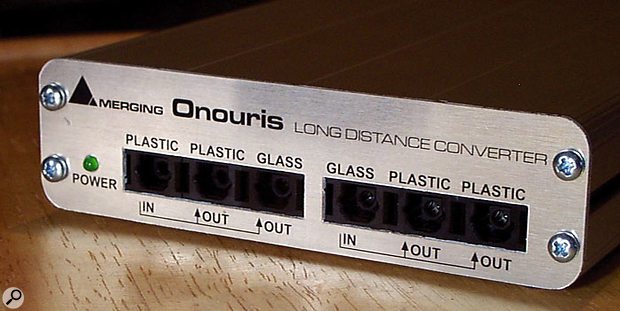 Merging Technologies' Onouris Long Distance Converter does exactly what it says on the tin, allowing ADAT optical signals to be carried up to 1km!

I'm putting together a list of equipment for a venue. We already have a PA (the amps are behind the stage), and the mixing position is about 30 metres from the performance area, although the cable run is more like 40m, as it goes around corners and over doorways. Initially I wanted to use a digital desk, such as a second-hand Yamaha 01V96, and trail ADAT cables to the stage, where they would connect to a bank of Behringer ADA8000s for A-D and D-A conversion. However, I understand that ADAT's maximum cable length is 10 metres. What do you suggest as an alternative? I would still like to keep the desk digital and locate all the converters on the stage with the amps.

News Editor Chris Mayes-Wright replies: Well, there are a few options available at a range of budgets. You're correct to dismiss standard ADAT over those lengths, as you will lose timing accuracy, resulting in audible clicks and pops. However, there are products that allow you to 'bump up' the ADAT signal, using a converter and a different type of cable. The standard ADAT protocol uses Plastic Optical Fibre (POF) cables, which have a relatively high attenuation rate (up to 1dB per metre in the case of poor-quality cables), whereas glass optical fibre cables are much more efficient. Merging Technologies' Onouris Long-distance Converter, pictured right, enables cable runs up to 600 metres, although you may struggle to find a cable that long! A set of two costs £495 (you need one at each end of the glass-fibre cable), and a 50-metre cable will cost £180, but you'll need two. So for a full system to carry your signal to the front of the venue and back again, you're looking at just shy of £1000. And that's only for eight channels...

For those on a more strict budget, it is possible to carry digital signals over regular network hardware. Hear Technologies' Extreme Extender system converts the optical signal to a network connection, and back to optical again, with the 'ADAT In' and 'ADAT Out' models at each end of a regular Cat-5e network cable with RJ45 connectors. They cost $79 each (around £41 when we went to press) and will work with cable lengths of over 150m. www.heartechnologies.com/extender/extreme_extender.htm has full details.

Of course, there are other format-conversion options that you could consider. The one that springs to mind immediately is Multi-channel Audio Digital Interface (MADI), which uses a single 75Ω coaxial cable to carry multiple channels of audio up to 100 metres. The number of channels transmittable down the MADI cable depends on the equipment and sample rate, but the Audio Engineering Society's specification for MADI (AES10) states that it can accommodate 56 channels of 24-bit, 48kHz audio as standard. However, many manufacturers use spare bandwidth to squeeze in an extra eight channels, making 64-channel transfer possible at this rate (channel counts halve at double the sample rate). For the Yamaha 01V96, you can purchase Audio Service's MY16 MADI64 expansion card (www.audio-service.com), which will give the mixer MADI capabilities. Of course, you'll need an analogue-to-MADI converter to get your on-stage signals into and out of the desk. These are available from the likes of RME, Euphonix and Otari, but because they're designed for critical-listening applications, they can be quite pricey, and you may not be able to justify spending the money!

An alternative — which is probably the best, but definitely not the cheapest — is to purchase one of a new breed of desks that feature a control surface and 'mix engine' combination. Examples include Digico's D1 and D5 (www.digico.org), Soundcraft's VI6 (www.soundcraftdigital.com), and Allen & Heath's iLive (www.ilive-digital.com). These allow the mixer — usually a flashy affair with motorised faders and touchscreen displays — to be located in the usual mix position, while connections and conversion are handled by an on-stage unit. The two modules are connected by a data cable, and the only audio connection that's required is for the engineer's monitor mix.

This suggestion may very well be out of the question in terms of budget, but it should give you an idea of what's available. If I was in your situation, however, I would buy a multicore and an analogue desk!