Q. Why can't I make the Kick Drum sit with the Bass? Skip to main content

Q. Why can't I make the Kick Drum sit with the Bass?

I'm trying to get a bass guitar to sit well with a kick drum. I know the idea of shaping the EQ of both so they'll complement each other, but it's not working as expected. The thing I'm finding is that, as the bass is a tuned instrument, the sound might be fine when a certain note is being played, but certain others may smother the kick when the bass line moves to those. Also, there are certain bass notes which are very 'boomy'. I can get rid of one or two with EQ, but I'm finding there will generally always be some point where the bass overpowers the kick. 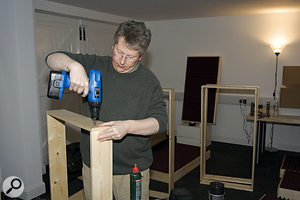 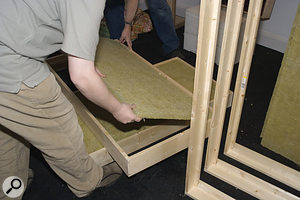 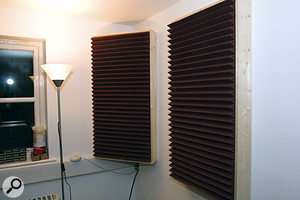 In Studio SOS July 2006, we demonstrated how to make effective and affordable bass traps.
Top to bottom: assembling the frames from pine planks; locating Rockwool slabs into the frames, creating an air gap at the rear to trap more troublesome bass; the finished product, with acoustic foam fixed in place. Technical Editor Hugh Robjohns replies: The comment about some bass notes being boomy worries me. Most basses are consistent in level if played well, and even if played badly you wouldn't expect the 'boomy' notes to be at the same pitch.

If you are finding that it's always a small and well-defined set of notes that are problematic, you may have significant standing-wave problems in your room. And if that's the case, you will not be able to make valid judgments about bass EQ — you will effectively be trying to EQ the room rather than the track, and your mixes won't travel at all well as a result.

I would spend some time sorting out the room acoustics. Install some bass traps to control those standing waves. I think then you'll find it much easier to hear what is going on, and to apply EQ sensibly.

As for what to buy, it depends on how much money you want to spend. There are plenty of products available from manufacturers such as Real Traps, Auralex and Ghost Acoustics but, in many cases, there is a DIY alternative.

If you're feeling really keen, follow our guide in Studio SOS  July 2006. To summarise, we made some frames from planed pine and fitted Rockwool slabs to the front of the frame, leaving an air gap behind them. We then glued sheets of Auralex acoustic foam to the outer side of the Rockwool, to provide some mid- and high-frequency absorption. Ten of these were located around the room, to trap bass. As an alternative, if you put a large sofa in your listening area you'll get a comfy place to sit and some bass trapping for free!