Q. What’s the best way to mount my speakers?

I have a set of Atacama SE1000 speaker stands, but at one metre, they're just a tad too high. I've used Blu-Tack on my current speakers to secure them to the tops of the stands, but would very much like to tilt them so that they fire downwards a little bit. Is there some simple and ingenious method to use, or should I go out and buy 90cm high stands? Also, just to be sure, my ears need to be level with the tweeters, right? I read somewhere that they should be level with a point midway between woofer and tweeter, in which case, I won't need to do any tilting. 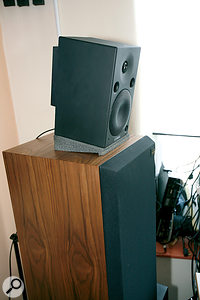 There's no particular reason not to tilt your speakers to make sure the tweeters are aimed towards your ears, but bear in mind that some speakers are designed to beam sound either up or down from the horizontal axis, so experiment with the sound, rather that just looking at where the tweeter is pointed! A good option for safe tilting is Auralex's Mo-Pads, as seen here.

SOS Technical Editor Hugh Robjohns replies: The optimal acoustic axis of most speakers is indeed a point somewhere between the woofer and tweeter, usually just about on the top edge of the woofer, directly below the tweeter. So, ideally, your ears should be level with that point. However, people naturally move around, sitting taller one minute and slouching the next, so I wouldn't worry about being too precise. Also, most speakers are balanced so that the optimum frequency response is obtained with the tweeters aimed directly towards the ears, but again this varies with different designs. Some are balanced to sound best with the axes from the tweeters of the two speakers arranged to cross as much as a metre behind the normal listening position (ie. the speakers should be 'toed out'). Always read the speaker's handbook to see what the manufacturer recommends.

There's nothing wrong with tilting a speaker down to aim the tweeters more towards the ears if it ends up being mounted high for some reason. Auralex Mo-Pads (and several other similar isolation mounts) are supplied with wedge sections to arrange a modest tilt up/down. Alternatively, you could cut a suitable piece of wood to length and and Blu-Tack that under the rear of the speaker to achieve the required tilt angle.

It is worth noting that many speakers are designed deliberately to 'beam' the most balanced sound slightly up or down from the horizontal axis. This is because of the way the two drive units interact through the crossover region and the phase alignment of the crossover, so some experimentation is always a good idea. This might appear a silly ritual dance to an onlooker, but try temporarily mounting the speaker so that the tweeter is around chest height, and then stand a metre or two in front of it and listen initially with the tweeter well below your ears. When you are familiar with the tonality, bend your knees to dip down, moving your ears level with the tweeter, and then below the tweeter. In this way you will hear any comb-filtering problems caused by the interaction of the two drive units, and you'll also quickly discover if the sound is more balanced above, below, or on the level with the tweeters. You will then know how to best to mount them for your normal listening position.