Q. Should I include breath sounds when doing vocal pitch-correction? Skip to main content

Q. Should I include breath sounds when doing vocal pitch-correction?

When I'm doing vocal pitch-correction, should I include breath sounds if I'm trying to get the sound to be realistic? I'm trying to figure out whether to include the breath sounds with my segments in Steinberg Cubase's VariAudio or not. I listened so hard I couldn't exactly tell what I was hearing in the end! 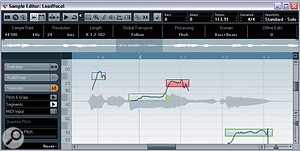 Adjusting the pitch 'blobs' in Cubase's VariAudio editing screen such that they don't extend over noisy sounds such as sibilants or breaths (as in this screenshot showing the lyric "it's the last time”) can improve the naturalness of the processing.

SOS contributor Mike Senior replies: I end up doing quite a lot of pitch-correction work with vocal tracks, what with dealing with so many Mix Rescue projects, and I'd recommend excluding not only the breaths from your pitch-processing, but also any other noise-only signals that form part of the vocal performance, sibilants in particular. The problem is that that type of spectral processing that VariAudio and many other pitch-correction utilities seem to apply in adjusting the pitch does slightly funny things to non-periodic noisy signals. The most common artifacts are a loss of high end or a rather coloured/softened tone that feels a bit like it's gone through a chorus effect.

Using Celemony's Melodyne (my own personal choice), it's pretty straightforward just to snip the breaths and sibilants into separate 'blobs' so that pitch-shifting neighbouring audio doesn't affect the noisy signal. However, the last time I used VariAudio back in version 6, noisy signals seemed to suffer the moment you encoded an audio region prior to processing, even when no pitch processing had actually been carried out. While this was a fairly subtle effect (and may have been improved upon for the latest v6.5), in Cubase you may need to snip out the breaths and sibilants as separate audio regions so that they completely bypass the VariAudio engine if you want the most transparent tone. If any clicks arise from this process, then Cubase's crossfade facility should deal with those.