I want to replace my Windows 7 PC's system drive with a solid‑state drive, but I have a lot of software on there that I'd rather not reinstall! Last time I did something like this (changing the system drive) half my software decided I had a new computer and wanted me to relicense/re‑register it! Is this likely to be the case now — and if so, is there an easy way to clone my system without having to reinstall or re‑license all my software?Jake Bunting, via email.

SOS contributor Martin Walker replies: I'd always advise someone changing their Windows operating system to start with a clean slate, both to minimise the chances of future problems and to achieve maximise performance. However, if you simply want to move your existing Windows installation onto another partition/drive, cloning it makes a lot more sense. 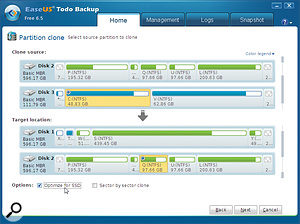 Cloning an existing Windows system hard drive onto an SSD (using a utility like EaseUS TodoBackup shown here) not only speeds up boot time and application launches, but will also save you several days of reinstalling Windows and all your applications.

A 'clone' is generally regarded as a snapshot of the entire structure of an existing drive (including arcana such as its master boot record and file allocation table) saved to another internal/external drive, so that in the event of a calamity you can simply power down, unplug the damaged drive, plug in your 'spare', reboot and carry on. An 'image' of a drive/partition on the other hand copies all the same data in a compressed (and hence smaller) format to an internal or external destination of your choice. This makes it easier to save multiple backup images for security.

You could clone your existing Windows 7 system drive straight across to a new solid‑state drive, or save an image of it elsewhere, unplug the existing system drive, install your new SSD and then restore that image. I'd be inclined to do the latter, if only so you always have that image to return your Windows system drive to its previously saved state (just in case anything goes wrong in the future).

Popular third‑party disk imaging software includes the low‑cost Acronis True Image (www.acronis.com) and Macrium Reflect (www.macrium.com/reflectfree.aspx), available in a free version for home use, as well as in more sophisticated Standard, Pro and Server versions for commercial and business use. My personal choice is EaseUS Todo Backup (www.todo‑backup.com), again available in a free version for home use as a successor Symantec's much‑missed Norton Ghost utility. All run on Windows XP, Vista, 7 and 8. Whichever you choose, just select the relevant Partition or Disk Clone option, point it at your Windows system disk/partition and destination location, and let it get on with the job. The only thing to watch out for is any 'Optimize for SSD' options that ensure proper sector alignment when saving the data: some utilities do this for you automatically, while others may need a box ticking.

The only other aspect to consider when cloning an existing Windows 7/8 hard drive to an SSD is (as I reported in SOS January 2014) to make sure that support for the Windows TRIM command is enabled. It will be after a fresh install on an SSD, but not if you've cloned an existing Windows install from a non-solid‑state drive. To check, run the free DriveControllerInfo utility (download it from http://download.orbmu2k.de/files...) and look for the telltale TRIM enabled on its top display line. If it's not there, you'll need to right‑click the CMD utility from the Windows Start menu and choose its 'Run as administrator' option, then type in the somewhat arcane 'fsutil behavior set disabledeletenotify 0'. This will counter any SSD performance drop over time.

When it comes to the world of software, there are sadly no hard-and-fast rules, so whether or not a particular product will throw a wobbly after its files have been surreptitiously shunted onto another drive can often only be determined by doing it. Having said that, it's highly likely that you'll experience business as usual with most software that's protected by hardware dongles (eLicenser, iLok and so on), which, despite the slight inconvenience, is one reason I don't mind using them. Many products protected by simpler serial number protection may also survive the transition, as this information will still be stored somewhere either in the cloned Windows Registry files or tucked away in encrypted form inside a cloned folder.

Casualties are more likely to be those that use challenge/response security, where the original challenge is generated by polling some unique combination of hardware in your PC. If you have installed software that asks you to click a button to generate a challenge, then click another button to go online and retrieve the corresponding response, you are entering a twilight zone. Moving your entire Windows partition from one drive to another may leave this software entirely functional, or it may upset the challenge and demand you generate another and get a further response. However, the chances still are that you won't have to reinstall that software, and if your PC is online, re‑registering will probably only take a matter of seconds for each product that requires it.

If you're unlucky, and find any software that refuses to run after its migration, just use the standard Windows uninstall option in Control Panel, avail yourself of any Repair options it offers (this may get your application up and running without your having to reinstall from scratch) and if all else fails, just uninstall and then reinstall to the same location. Whatever happens, cloning your system drive is likely to save you several days of extra effort compared with starting from scratch.