Q. What's the difference between phasing and flanging? 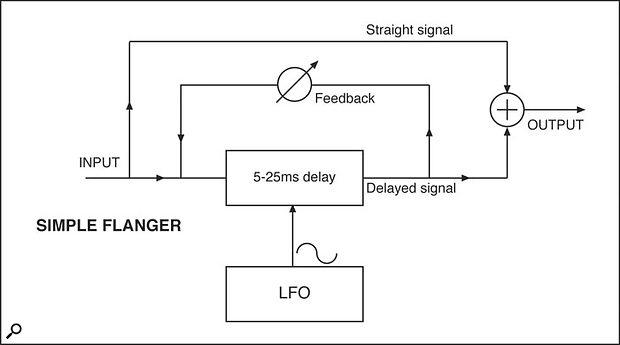 I have several phasing and flanging plug-ins, and the same effects on my Korg Triton. While not identical, the two effects seem quite similar. What's the difference between the two?

SOS contributor Steve Howell replies: These two types of effect are indeed related in many respects, and they are both created by delaying the signal by small amounts and then mixing this with the dry signal.

If you delay a simple sine wave and superimpose it on the original waveform, when the phase of the two sine waves is close, the sound is reinforced in some places. But when the two are exactly 180 degrees out of phase and exactly equal in amplitude, this results in total cancellation. It's simple maths — add +5 to -5 and you're left with nothing.

With more complex waveforms, superimposing the same signal and delaying it slightly creates what is known as a 'comb' filter — the frequency response of the filter has various peaks and troughs of amplitude ('teeth') across the harmonic spectrum. Some frequencies are reinforced whilst others are cancelled due to phase differences across the frequency spectrum, and when the delay time is changed (typically with an LFO), the teeth move to create the characteristic 'swooshing' effect common to phasers and flangers. However, whilst essentially based on the same principles and producing a similar effect, the two effects are achieved differently. 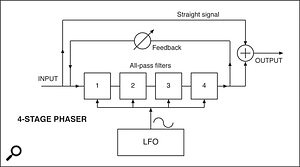 These simplified block diagrams show a flanger circuit, which applies delay equally to the entire signal, and a four-stage phaser, which uses four all-pass filters to delay different frequencies in the original signal by different amounts.

With the phaser effect, the signal passes through all-pass filters which have a non-linear frequency phase response. This results in phase differences in the output signal that depend on the input signal frequency — for example, the phase of a low frequency might be shifted by one quarter of a wavelength, whilst a higher frequency will be phase-shifted by a different amount. In other words, various frequencies in the original signal are delayed by different amounts, causing peaks and troughs in the output signal which are not necessarily harmonically related.

Flanging, on the other hand, uses a delay applied equally to the entire signal which is similar in principle to phasing except that the delay (and hence phase shift) is uniform across the entire sound. The result is a comb filter with peaks and troughs that are in a linear harmonic series.

Typically, the comb filter created by flanging's uniform delay will have many uniformly spaced 'teeth' whilst a phaser (depending on the design of the circuitry) will have fewer teeth — maybe even just one — and/or they will be unevenly spaced and the spacing will depend on the whim of the designer, using tried and trusted scientific principles such as 'does it sound good?'

Flanging is easily created using a short delay (around 10ms) that is modulated by an LFO. Phasing, however, needs further consideration. Because its frequency response has fewer 'teeth', having just one all-pass filter gives a subdued phase-shifting sound. But by adding extra 'stages' (in other words, extra all-pass filters), you can add extra degrees of phase shift, which is why you might see some phasers with an option to select 90, 180, 270 and 360 degrees of phase shift — each one switches in another filter, thereby potentially introducing more 'teeth'.

Eventide have re-created their revolutionary Instant Flanger and Instant Phaser units as software plug-ins.The term 'flanging' comes from the original technique of using two synchronised tape machines playing back identical audio — during playback, the flange (or rim or outer edge) of one of the tape machine's reels would be obstructed in some way — slight pressure applied with the operator's finger to the reel, for example — so that one tape machine was delayed ever so slightly for a brief moment and then, as the 'obstructed' tape machine gradually got back in sync with the other, you'd hear 'that sound'.

Flanging and phasing remained very definitely in the Heath Robinson domain for many years, using two manually obstructed tape machines, until the company Eventide used analogue electronics to produce the same effects in their Instant Flanger and Instant Phaser units. Despite advances in modern DSP technology, these units still stand the test of time as perhaps the ultimate effects of their type (although that is not to dismiss their modern successors, all of which can produce excellent results) but the Eventides uniquely allowed the effect to 'go through the null', the point where the effect is phase/time-shifted such that it creates a dramatic (but temporary) total audio phase cancellation. During the '70s, many manufacturers released some fantastic phasing and flanging products. Of note (in my opinion) are the Electro Harmonix pedals — the Electric Mistress flanger and the Big Stone and Small Stone phasers — which were cheap and cheerful but offered fantastic sounds. Roland also produced some gorgeous-sounding pedals and rack units during this time, as did MXR, Mutron, Oberheim and others.

Flanging and phasing are, of course, most obvious and startling on harmonically rich sound sources but can be equally effective (if used more subtly) on mellower instruments — it was a popular effect on the Fender Rhodes in the '70s, and Japanese synth-meister Isao Tomita would regularly run mellow sounds through his Eventides to great effect. When using either effect, the parameters are almost identical. Typically flangers and phasers will offer LFO speed and depth controls (and maybe a choice of LFO waveform, although this is typically a triangle or sine wave), as well as a feedback control that enhances or heightens the effect. But whereas a flanger effect will sometimes offer a base delay time (typically 5-20ms), a phaser might offer a base phase angle as well as the aforementioned 'phase degree' switch. In either case, the modulating LFO will 'rotate' around these base settings to provide a variety of different effects.

Today, there are many variations on the basic effects. We have stereo effects where the left and right channels' modulation is inverted giving rise to a subtle panning effect. We also have effects where multiple delay lines and/or all-pass filters are used in parallel (and modulated at different phase angles of the modulating LFO waveform) to create rich, evolving textures, and we also have 'crossover' effects where the feeback from one channel is fed to the other (and combinations of the above) to create all manner of swirling textures.