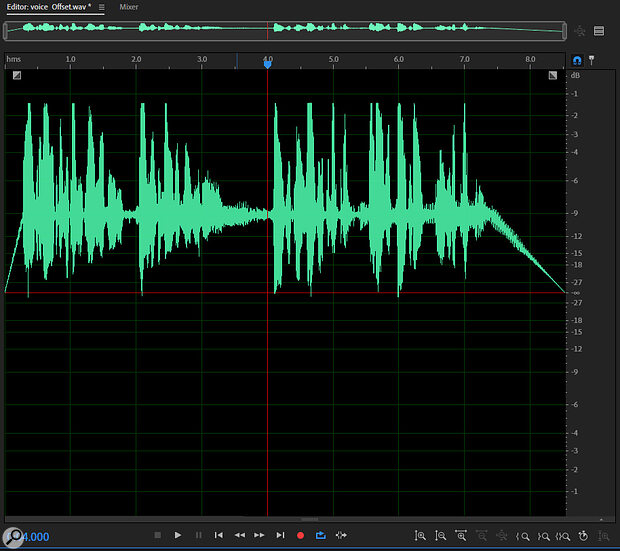 The waveform of an audio file looks bizarre when I load it in Adobe Audition, with a curious displacement of the audio on each channel. The problem appears to be caused by a single track of whalesong: the waveform’s centre appears to have been displaced above the usual zero line. Can you suggest the cause and how to correctly centre the track please?

SOS Technical Editor Hugh Robjohns: It seems the waveform is suffering from an enormous DC offset which is almost certainly present in the original whalesong source track (possibly as a result of it being generated by scientific software which stored the audio data as numbers that only go positive, rather than symmetrically in the normal audio convention). DC offsets used to be a common problem of A‑D converters, but it’s an extremely rare occurrence these days.

A DC offset won’t normally affect the sound of the audio file per se, but it could potentially result in asymmetrical clipping or confuse dynamics processors.

The good news is that a DC offset won’t normally affect the sound of the audio file per se. That said, it could potentially result in asymmetrical clipping or confuse the heck out of some dynamics processors. More critically, it will definitely also result in very nasty clicks if you edit the offset material into more normal audio, so it’s a very good idea to correct it. Correcting a DC offset is usually fairly simple and most DAWs or audio editors have the necessary tools. In Adobe Audition, load the file in the waveform editor and select: Effects / Amplitude & Compression / Normalise (process). Deselect the two Normalise tick boxes (unless you also want to normalise the waveform amplitude) and select the DC Bias Adjust tick box. Make sure the amount is set to 0% and hit Apply. When the process completes the waveform should sit exactly on the red line, with the DC offset ‘magically’ removed.

I’ve simulated what you describe in Adobe Audition. The first screenshot (above) shows a recording of speech with a similar amount of DC offset to your whalesong: you can clearly see how the signal climbs away from the centre line during the fade in and falls back to it during the fade out. The second screenshot (below) shows the result of the DC Bias Adjust process. (It’s worth noting that speech naturally has a slightly asymmetrical waveform, and this shouldn’t be confused with the very unnatural DC offset!) 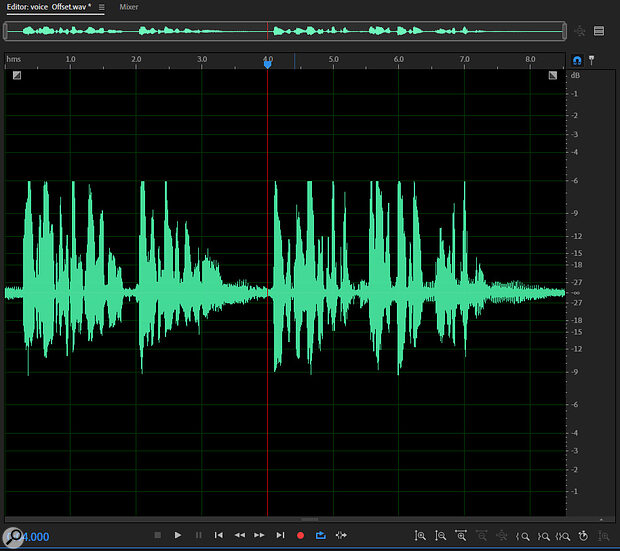