Q. When are diffusors a good idea? Skip to main content

Q. When are diffusors a good idea? 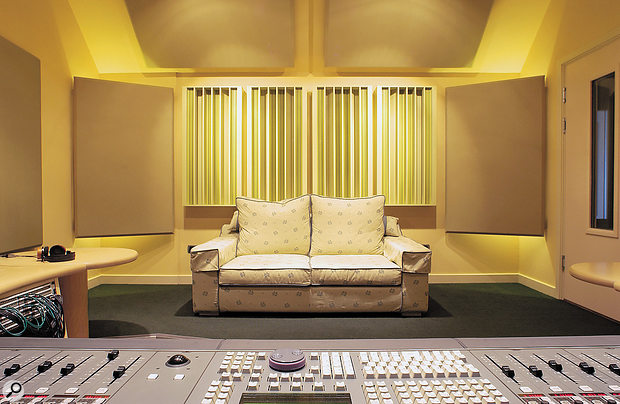 Diffusers, as pictured at the rear of this studio, come in many shapes and sizes but they’re only really useful in larger rooms — roughly the size of a double-garage conversion or bigger. In typical domestic spaces they’re usually too near to the listening position to have a positive effect, and can even cause problems.

I’ve seen some advice on building quadratic diffusors for peanuts, based on an old BBC paper. It seems a great idea, and much better looking than foam! But what I’m not clear on is when it’s a better option to use such a diffusor than to use absorption — presumably it depends on the size of room? Also, is there an optimum frequency range that you’d build these things to tackle? (Obviously they get rather big if you try to use them for bass, so I assume you’d use them alongside bass traps at the very least!)

SOS Editor In Chief Paul White replies: The main purpose of normal-sized diffusors (ones that would fit in a typical small studio) is to break up hard reflections by diffusing the reflected energy over a wide area, rather than bouncing it straight back like a mirror. That stops things sounding too ‘dead’ at higher frequencies. However they don’t do much of any use in smaller rooms, simply because they need space to allow the diffused energy to spread out. In short, while they’re potentially useful in professional studios and large rooms, I don’t see them as being very useful in most home-sized studios — and they’re certainly not going to be any use in controlling the low end.

SOS Technical Editor Hugh Robjohns adds: If you’re into basic DIY, all forms of room treatment can be done for peanuts. The visual aesthetics aren’t as important as the resulting acoustic benefits. Diffusors may look great, but they are sound reflectors not sound absorbers, and the latter are usually required far more!

When trying to optimise a domestic room or garage space for use as a control room, the most common problem is that it is too reverberant, with sound bouncing strongly off the parallel boundary surfaces. The easiest way of dealing with this is to install broadband absorber panels which ‘soak up’ any sound waves hitting them, thus preventing the sound from bouncing back into the room and so reducing the overall reverberation time, making the room less ‘live’ sounding.

The challenge with such an approach is in trying to maintain a nice, even balance of reverberation across the entire frequency spectrum. It’s incredibly easy to soak up too much of the high frequency sounds, but considerably harder to do the same for mid and especially low frequencies. It is consequently all too easy to achieve a reasonable reverberation time at mid and low frequencies, but with an excessively damped high end, resulting in a dull-sounding and unpleasant working environment.

In such circumstances, installing some reflective panels of various types can help to restore the balance of energy in the room at the high and upper-mid end of the frequency spectrum. Obviously, since a reflective panel absorbs negligible sound the energy is kept in the room, but we don’t want that reflected energy to create standing waves and slap-backs — and that’s where the diffusor designs come in.

Different diffusor designs operate over different frequency ranges, and bounce the sound in different planes (horizontally, vertically, or both), so some careful consideration is required when choosing and installing the panels, to determine where the reflected sound energy is directed.

The other issue to beware of is that with most diffusor-panel designs, reflected sound only becomes genuinely ‘diffuse’ a certain minimum distance from the panel, and if the panels are placed too close to the listening position you can hear an unpleasant phasey colouration in some cases. For that reason I would suggest a minimum of 1.5 metres between diffusors and listening position, and ideally more than that.

In my experience, diffusor panels are of limited use in small domestic rooms (floor areas below about nine square meters), but they become much more useful in larger rooms — so are perhaps worth considering if your studio is in a converted double garage or similarly large space. Bear in mind, though, that they take up considerably more space the lower the frequencies are that you wish them to diffuse.