Q. Should I worry about the readings on my vectorscope? Skip to main content

Q. Should I worry about the readings on my vectorscope?

I’m using the MeldaProduction Mixing Bundle plug-ins for mixing and I noticed that certain instrument patches (especially from Spectrasonic Omnisphere and the Access Virus) sound very appealing and wide, but when I check them on Melda’s MStereoScope [a vectorscope display] they appear fairly heavily out of phase. Certain drum-machine kits (such as Steinberg’s Groove Agent 4) also seem quite out of phase too. I’m not talking totally out of phase, but above 66 percent on the display, such that the MStereoScope manual suggests that “phase coherence may cause problems”. However, I also noticed that when I use these kinds of sounds in my full mix (ie. mixed with mono bass, mono kick, and so forth) an instance of MStereoScope on the master bus shows a perfectly healthy phase reading, and checking the mix in mono I don’t notice sudden sonic changes. So should I worry about the phase readings on the individual tracks/sounds, assuming that (for me) mono-compatibility isn’t that high a priority? 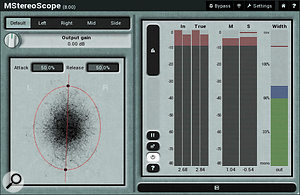 Although vectorscope plug-ins such as that in Melda Productions’ MStereoScope are extremely useful for avoiding mono-compatibility problems while recording and mixing, they’re no substitute for using your ears.SOS Contributor Mike Senior replies: I’m also a big fan of Melda’s MStereoScope but I think you’re drawing too many conclusions from its display — like all audio metering, it should only really be used to assist your ears, not to somehow dictate what ‘should’ sound right. There is no standard stereo mix width that everyone agrees on, and it can vary a great deal depending on what kind of music you’re working on. So the first thing I’d say is to disregard the manual’s width recommendations, and instead study how some of your favourite productions look on the scope. That’ll give you much more useful information about the kinds of things you should be seeing on the display for the music you’re doing.

To get back to the specific question, it’s no coincidence that the patches that sound so appealingly wide have a strong out-of-phase component in their stereo signal, because it’s the out-of-phase component that’s directly responsible for stereo width. Indeed, synth-preset designers often deliberately hype out-of-phase components to deliver a ‘wider than the speakers’ stereo image, because that’s a good way to impress a lot of potential purchasers. The spaced microphone techniques often used for pop/rock drum recordings also tend to be rich in out-of-phase components. The downside of super-wide stereo signals, though, is that their out-of-phase component disappears in mono, which can cause their subjective level and tone to suffer if the mix is played on many smaller portable playback devices or on large distributed speaker systems in public spaces. Try switching to mono while soloing any of those synth/drum patches you mentioned and you should hear an appreciable difference.

Now, if you put the vectorscope display over your whole mix, it’ll be showing the overall balance between in-phase and out-of-phase components for all the sounds, so it stands to reason that if your most important instruments are mostly mono sources and centrally panned, they’ll dominate over your superwide sounds to give a fairly in-phase-looking result. This doesn’t take away from the fact that those super-wide tracks will still suffer in mono-playback situations, in exactly the same way they did in solo. If those tracks aren’t important to the mix, the sonic damage is unlikely to be a big deal; but if one of your lead riffs drops 3dB in level and changes timbre in mono, say, then that may be a more serious issue. As such, I wouldn’t rely on the vectorscope to troubleshoot this issue. The only foolproof way to reassure yourself that all is well is by switching back and forth between mono and stereo playback and listening carefully.

Of course, all that has to be tempered by how important mono-compatibility is to you, and in your case you may decide that you’re not too worried about mono losses. In which case, the question of stereo width becomes much more of a pure aesthetic concern. That doesn’t completely remove any need for restraint, though, as stereo width provides an important element of contrast in a lot of music productions, differentiating different instruments and musical sections from each other.