Q. Where should I put my violas?

I'm going to be recording a string section. I'll be recording the section using both close-miking and a Decca tree in order to have maximum recording flexibility. We'll be doubling a lot of sections and, further down the line, adding a 10-piece brass section and some samples to make the recording sound fuller. Can you please advise me as to how I can place my 14 string players in order to get the most out of them? I have five first violins, three second violins, two violas, two cellos and two double basses. As I only have two violas, I'm worried that placing my players in their normal orchestral positions will leave a big gap in the middle of the formation, where the violas would be placed. I'm trying to emulate a large orchestra and have been mulling over whether a wider spread of players will help or not. The danger is that the players will not blend, and instead sound like individual players, which must be avoided. What's your advice here? 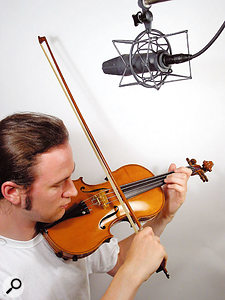 With only two violas in the section, there could be problems with regards to the mix balance. If you have time, you could try overdubbing extra violas to make up for the shortfall.If this orchestral arrangement is designed to complement some kind of pop or rock track, then leaving a bit of a hole in the middle and over-emphasising the width of the section might be just what you need. This will keep the strings out of the way of other more important parts of the track, such as lead vocals. Plus, with everything else going on, you probably won't notice a few blend problems in the grand scheme of things.

However, it sounds to me more like you're trying to mock up an orchestral score for a film or something similar, in which case the situation's a bit different. You might find that you have mix-balance problems with only a couple of violas. A lot depends on the specific players, instruments, and arrangement, but the numbers are a little against you. If it's just the stereo image you're worried about (and you're not happy for this hole to be filled by the winds and brass), then move the violas a little closer to the cellos, and bring the whole string formation tighter together. If balance is still the problem, then you're right that pushing the close mic nearer to the violas, to compensate for their minority, could easily affect the blend. If you have time, you could try overdubbing the violas as a separate part to give you a fall-back option. (If the lack of other parts would make it impossible for the violas to coordinate their part solo, then put in a token player on whichever other sections are required to make it possible.) The important thing to remember when doing this is to record the Decca tree alongside the viola close mics: this will give you more viola ambience to help gain the illusion of more viola players. That said, if you're going to be including samples anyway, you might find that you can deal with any imbalance at that stage. A pair of violas, especially if doubled, should be enough to disguise quite a lot of extra sampled viola parts. If there is an exposed viola line that you're worried about somewhere, but you still want to prop things up with more samples, then adjust the arrangement a little in that spot to double the violas with some of the violins or cellos. If all else fails, and you have to turn up the viola close mics in a way that affects the blend, then you might be able to compensate with a little added reverb on those mics.

However, If you're aiming to capture a very natural sound, more akin to a classical-style ensemble, then you have to ask yourself how much real stereo positioning you'd actually hear from a couple of dozen rows back in a concert hall. I'd question the idea of widening things too much if that's your target sound.