Q. How do you record a choir? Skip to main content

Q. How do you record a choir? 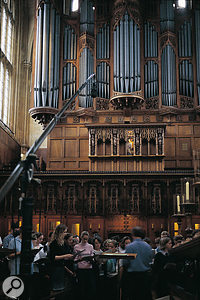 Hugh: The country is full of choirs, with varying levels of skill and musicality. There are many different styles of choral music, and many different performance spaces, so there is no 'one way' to record them. Every single case will be different and require different approaches. Also, choral music is, in my opinion, one of the hardest genres to record, and it can show up any weaknesses in equipment or technique remarkably well!

The first consideration has to be finding a suitable acoustic space in which to record. With conventional or traditional choirs, I have found that the best approach is to keep it simple, with just a stereo pair of microphones, and perhaps some outriggers or spaced mics if the situation calls for it. That means the acoustics of any performance space are critical to the overall sound, so choosing a good venue is paramount.

Paul: On the other hand, if you have access to a project studio, you could try to record a choir there. But space will be limited, so think about recording small groups in stages. Of course, the choir may not be comfortable with this, and even if they agree, you'll have to supply headphones for everyone who is overdubbing parts. On the upside, though, you can pan the different parts separately and also add stereo reverb to the end result, giving you more control over the overall sound.

Hugh: I'd always go for a 'real' choral setting if possible, and there are plenty of great-sounding churches and halls around. Although finding one that is well away from traffic, flight paths and football playgrounds can be a challenge! Bear in mind that if you are recording a gospel choir, they tend to be recorded closer — sometimes even with individual mics — so excellent room acoustics aren't quite so vital. Even so, a reasonably good sound in the room minimises colouration problems and helps the choir to perform well.

Paul: Where you have control over the way the choir is arranged (not in the musical sense), you may be able to put the loudest and the least good singers furthest from the mics, or adjust the number of rows to change the width of the choir. This is something I often had to do with school choirs. There was also one recording I had to make in an empty converted chapel where the acoustic was actually too lively to give a good result. So, we set up a folding table-tennis table behind the choir to form a vertical screen, then draped it with gym mats and clothing to damp down the acoustic a little bit. You'll probably not find many gym mats in your typical church, but if you scout out the venue before the recording session, you'll be able to come prepared with some duvets and tall lighting stands for a similar effect.

Hugh: Microphone setups will depend on acoustics, available equipment and personal taste. I usually start with either an ORTF arrangement (cardioids angled at 110 degrees and spaced 17cm apart), or a coincident pair — often crossed figure-of-eights — if the acoustic will allow. Small-diaphragm mics are generally better for capturing a choir as they suffer less coloration for off-axis sounds, and there will be a lot of that! With a large choir, adding omni outriggers can sometimes help to increase the spaciousness of the recording (especially if using a coincident pair). You can also use outriggers, positioned further back from the choir, to enhance the reverberation pick-up if the space is a little dry and confined. If there is an accompanying instrument, such as a piano or organ, it's usually necessary to add a spot mic or two to help focus the sound and stabilise its position in the image, but be careful not to overdo it and make it stand out.

Paul: While Hugh favours coincident mics, I tend to use spaced cardioids (or omnis where the acoustic is sufficiently sympathetic). I space these apart by around half the width of the choir and set them up on stands at least a metre higher than the front row of the choir (assuming there are high ceilings). This provides a relatively even coverage over choirs that are two or more rows deep, and also ensures the singers at either side aren't left out. The mic distance from the choir will need to be adjusted to acheive a good balance of direct and reverberant sound, though you can always err on the side of 'too dry' by keeping the mics close (one to two metres in front of the front row) and then add additional, artificial reverb if necessary.

Hugh: I always record flat, with no EQ or compression. It simply isn't needed and, if it's required at all, is far better to judge in a known acoustic. Depending on the complexity of the work and the intentions for it, I would either track each mic separately and work on a mix later, or I would mix straight to stereo in one go. In my broadcasting days, I would have pushed and pulled the faders as necessary, controlling the major dynamic changes to suit the restrictions of live broadcasting. With modern recording equipment there is plenty of dynamic range to capture the whole recording with fixed levels.

Paul: It pays to leave a lot of headroom when recording choral material. Not only will the volume increase through the early part of the day as the choir warms up, but the complex interactions of lines and harmonies can create complicated beat patterns that benefit from plenty of headroom to breathe. With 24-bit recording systems there won't be any problem with the noise floor, so don't be afraid to leave 10-15dB of headroom on peaks.