Q. Which digital multitracker is the right one for me? 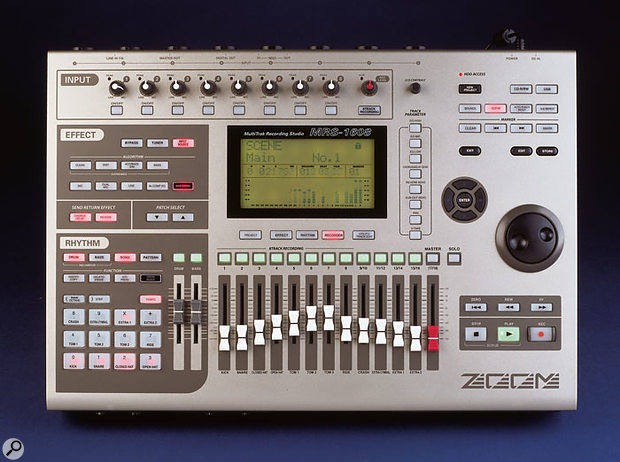 I read Tom Flint's piece on the Zoom MRS1608 multitracker and think it may be the right machine for me. I still use a Roland TR707 drum machine which allows you to step write and tap write. The sounds, of course, are ancient. I write simple country songs, mostly backed by drums and guitars. I think the Zoom's drum machine would be great for what I do. I would think the guitar effects would also be pretty good on this machine. I currently own the Tascam 2488. I think my recordings sound really good on this machine, but I don't like the guitar effects much and find them a little difficult to use. I don't even use the drum machine and I don't use MIDI or edit much at all. Based on what I have told you, do you think I would be pleased if I unloaded the Tascam and bought the Zoom? I would appreciate your opinion on this subject and thank you in advance.

SOS contributor Tom Flint replies: Before they entered the multitracker market, Zoom were busy gaining a name for themselves producing drum machines and guitar effects (amongst other things), so you can expect a reasonable level of quality and competence in both these areas. If I remember correctly, the MRS1608's internal drums sounds are good and varied — if country music is your thing then the chances are that the sounds in the MRS will serve you better than the TR707! The MRS has 50 drum kits which should certainly include a few that are suitable, and it is possible to take the best sounds from various kits and create a custom kit yourself. If you're not satisfied with the onboard sounds, the Pad Sampler facility allows AIFF and WAV samples to be loaded from CD and used as alternative drum sounds. Alternatively, you could use the Phrase Loop sampler to put together drum and percussion loops taken directly from sample libraries, or choose from among the MRS's 475 preset drum and bass patterns.

The sequencer itself offers both real-time and step-based recording, so it should allow you to program drums in a similar way to the TR707, although I believe the Zoom's grid has a finer resolution than the 707 and there are more time-signature options. It's also worth noting that some of the Zoom's programming facilities will be familiar to TR users. For example, just as the 707 has a set of faders for setting sound levels for each kit component, the MRS allows the channel faders to be used for adjusting its own drum samples. The Zoom multitracker also benefits from having 12 touch-sensitive pads for triggering drums.

Tascam have a long history of producing multitrack recorders, but they're not known as makers of effects or drum machines so it's not surprising to hear that the 2488 hasn't quite lived up to your expectations in these areas. It does have an internal GM sound module with many useful drum and instrument sounds, and, like the MRS, it can Import and play Standard MIDI files, but it doesn't have anything approaching a pad bank, and there are no sampling facilities. So as far as the drum machines are concerned, the MRS is much better equipped.

That said, a decent drum section shouldn't be your only consideration. Before you offload the 2488, think carefully about whether there are any recording, editing or mixing facilities that you regularly use, and check they are also available on the Zoom. The Zoom has a rather more basic display which may hinder its usability a little. That has to be something to consider, given that you say you find some of the 2488's features difficult to use. Without doing some objective side-by-side testing it's impossible to say whether the Zoom sounds as good as the Tascam or not, but I can say that I didn't think the Zoom was particularly weak in that department, and I suspect there's little to choose between them.

Nevertheless, I'd advise anyone using a budget multitracker to use a good-quality external preamp for any important lead work if at all possible, simply because the onboard preamps are not going to be of the highest quality. What's more, if your preamp has a decent A-D converter with an S/PDIF output built in, it would be a good idea to bypass the multitracker's converters by using its S/PDIF input, and clocking the multitracker to the preamp's digital clock.

Normally I'd probably suggest upgrading to a better machine when trading in your old multitracker for a new one, but there aren't really any high-end products which go in for drum machines and sequencers in quite the same way as the MRS1608, so I'm not sure you have much choice if you really want these kinds of features. The other option would be to hold onto the Tascam 2488 and buy a more modern drum machine — Alesis, Boss and Zoom all make self-contained drum machines which cost less than £300 — and slave it to the 2488 via MIDI.