Q. Why are analogue tape emulation plug-ins so expensive?

The effects of recording to tape seem to be very subtle, with the so-called 'warmth' appearing to be largely due to the soft-saturation characteristics of the tape itself and other non-linear components in the signal chain. This being the case, won't a simpler valve emulation or mild overdrive plug-in achieve pretty much the same result as both really just 'squash' the signal peaks? If so, why do tape emulation plug-ins cost so much more than overdrive plug-ins? 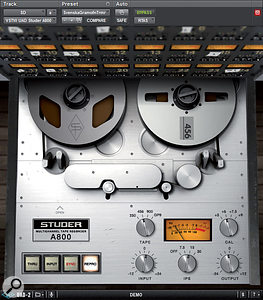 What is it about decent analogue-tape emulations that means they can command a higher price than, say, a tube distortion plug-in?

SOS Editor In Chief Paul White replies: You're right in pointing out that the effects of recording to tape can be pretty subtle, but they do become more obvious if you drive the tape harder, deliberately causing saturation. That saturation is a big part of what makes tape sound the way it does, of course, but the signal is also equalised (usually NAB or IEC) before going to tape and then additional EQ is applied on playback to linearise the performance of what's otherwise a somewhat imperfect medium (tape has a natural high-end loss that must be compensated for). In other words, the tape saturation is effectively applied to an equalised signal with all its attendant phase-shift implications rather than to the flat signal. The outcome is that the spectrum of added 'saturation' harmonics will be a little different from those produced when a flat signal is fed via a simple non-linear saturation device. Tape machines will, for example, distort at far lower levels for high-frequency sounds such as hi-hats than for lower-frequency sounds. Other factors also come into play, such as the bass-boost 'head bump', which is a function of tape speed and head-gap design, as well as subtle pitch modulation that we term 'wow and flutter'. Even the best analogue tape transports are far less stable than a digital clock. All these elements add up to produce the analogue tape sound, but even that changes depending on the tape recorder model, the tape speed and the formulation of the tape being used.

There are also other effects that may be considered more or less important such as modulation noise (a sine wave recorded to an analogue tape machine can sound alarmingly crunchy!) and the position of other non-linear devices such as transformers and valves in the signal path. Tape machines also introduce significant phase shifts, as you'd see if you recorded a square wave and then checked the output on an oscilloscope. You might expect to see some integration or smoothing of the sharp rising and falling edges of the waveform because of the frequency response limits of the tape machine, but the reality is that the square wave often appears bent almost beyond recognition, due to different frequencies being shifted in phase relative to each other during the recording and playback process.

A simple valve emulation plug-in may deliver the desired warmth — and if that's all you want then I guess you're in luck! — but designing a plug-in that takes into account all the variables of specific tape machines including tape width, speed, hiss and formulation, and recording levels is a very complex task, which is why the best of these tape emulations don't come cheap. However, bear in mind that most still cost rather less than an album's worth of two-inch tape, and that if you just want a general approximation of the effect, but without the accuracy of modelling, there are some pleasant-sounding freebies and low-cost plug-ins available.