Q. Why are Reflexion Filters used behind the mic if the mic picks up sound from the front? Skip to main content

Q. Why are Reflexion Filters used behind the mic if the mic picks up sound from the front?

I've noticed that a lot of companies now market a variation on the curved screen theme to go behind a vocal mic, with the claim that these devices exclude the room acoustics and give you a cleaner recording. But surely, most vocal mics are cardioid pattern, which means they pick up sound only from in front — so how can a screen behind the mic help? Am I missing something or are we being sold smoke and mirrors?

SOS Editor In Chief Paul White replies: If you look at the polar pattern of a cardioid pattern mic, you'll see that, although they are indeed most sensitive at the front as you suggest, the sensitivity doesn't fall by much by the time you're 90 degrees off-axis so they can also pick up quite a lot of sound from the sides. Furthermore, their HF response falls away once you're off-axis so what comes in from the sides can end up sounding somewhat dull. Indeed the only place that approaches being completely 'deaf' is a very narrow angle directly behind the mic.

A curved screen reduces the amount of reflected sound reaching the sides and rear of the microphone so 'room reverb' can significantly be reduced. However, such screens can't intercept sound reflecting from walls behind the vocalist, which is why we always suggest combining these screen, with an 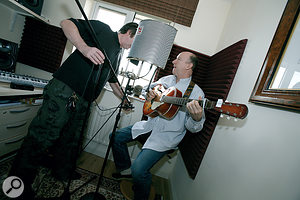 Why are Reflexion Filters and similar devices placed behind a directional mic? absorber of some kind hung behind the performer. This could be acoustic foam, mineral wool or a good old thick and cheap polyester duvet, and if you can arrange your screen in a curve or V shape so that it also intercepts some of the sound approaching the microphone from the sides, this combination of a commercial screen behind the mic and an improvised screen behind the performer can be extremely effective. In low ceiling rooms we sometimes go one further and suggest a foam panel above the mic and vocalist to prevent ceiling reflections from reaching the mic.

While such lightweight screens have little effect at low frequencies, they actually work very well in the vocal frequency range and the same tactic can be applied to non-bass acoustic instruments where necessary, such as acoustic guitar. Smaller curved screens are also available to fit behind instrument mics where space is tight, and these can be useful fitted to drum overheads to reduce the effect of ceiling reflections.

As you may well have discovered already, a bad-sounding room reverb can't be disguised by adding a good-quality artificial reverb, so any technique that helps dry up the sound at source is worthwhile, especially in the smaller rooms that tend to get used for home studios. So, the short answer to your question is that such screens are not just smoke and mirrors, but they do benefit from a bit of help from a duvet or two.