Q. Why do my power supplies spark when first plugged in? Skip to main content

Q. Why do my power supplies spark when first plugged in? 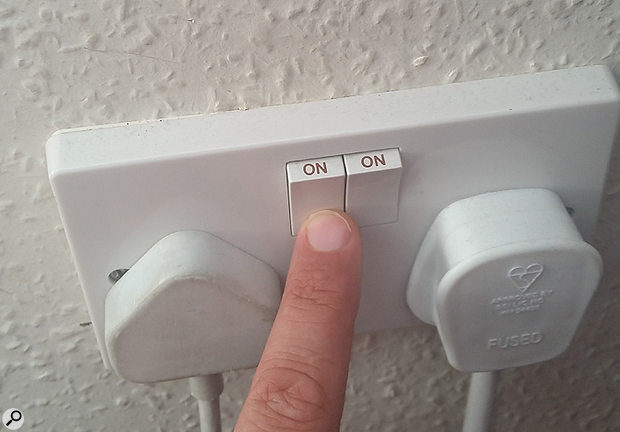 Switched-mode power supplies can cause large inrushes of current when power is first switched on. By plugging them into the wall socket before you switch on the mains supply, you’ll at least prevent the scarily visible sparks, even if they’re probably happening behind the scenes!

I have three laptops in the house, all of which produce various sparks and flashes at the mains end when plugged into the wall. It’s always bothered me —in terms both of health and of the safety of my computers and audio gear. Can this be ‘right’ or is there a problem with the power supplies, or even my mains supply?

SOS Technical Editor Hugh Robjohns replies: Switched-mode power supplies (SMPS), like those ‘line lumps’ used on laptops (and almost everything else, including plenty of audio processors) usually have a pretty heavy in-rush current when first exposed to the mains supply.

The magnitude of the in-rush depends on the design and power rating of the SMPS, but a 24V / 10A supply could easily pull 30 Amps or more for a fraction of a second — hence the sparks. It’s quite common to see and, sadly, is even considered normal. The sparks act as RF interference generators, inducing transient clicks on poorly shielded audio equipment and often imposing a brief voltage pulse in the local mains earth wiring, which can cause glitches in susceptible digital equipment of all kinds!

If you plug in with the socket switched off and then switch on at the wall, at least you won’t see the sparks any more (although they are probably still there across the switch terminals), but I’ve known some el-cheapo knock-off wall-socket switches become welded closed because of excessive in-rush currents!