Q. Why do I sometimes see singers using two microphones on stage?

I've noticed that, when I watch old concert footage, the singer is often using two mics. I'd always assumed that one was being used for recording purposes and one was being fed to the PA. However, I recently heard that the Grateful Dead used a two‑mic technique for noise cancelling, is this true, and how would it work? 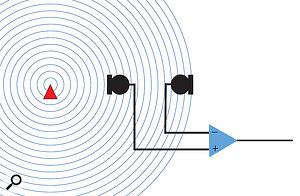 Using two mics for noise cancellation. Combining outputs of both at equal gains, but in opposite polarities, will cancel ambient noise from each to a certain degree.

SOS Technical Editor Hugh Robjohns replies: You are quite right in that, back in the 1970s, it was quite common when recording a live concert for the recording people to simply tape a second mic to the PA vocal mic to acquire their recording feed. Mic splitters either weren't trusted back then or they were too expensive!

The two‑mic noise‑cancelling idea is well known and very common in many sound applications — most notably aircraft communication headsets — but is rarely seen these days in live sound and PA. The same basic physics explains why football commentators' lip ribbon mics work so well at rejecting the crowd noise.

The basic idea of the two‑mic technique is to have two microphones spaced a short distance apart (usually between one and two‑inches or two to six centimetres) in front of the mouth, or whatever the sound source is. Both microphones must be able to hear the sound source directly. If they are cardioids, they both need to face the sound source, although this is more usually done with omnidirectional microphones, for the following reasons. The ambient noise, being inherently diffuse sound, will be captured equally in level by both mics; their spacing will make no significant difference to the ambient sound level they capture. By contrast, the wanted sound will be in the near field of both mics and, provided the front mic is very close to the sound source (ie. near the lips of the vocalist), the inverse square law of sound‑energy dispersion means that the more distant mic will receive significantly less energy from the close sound source than the front mic will. 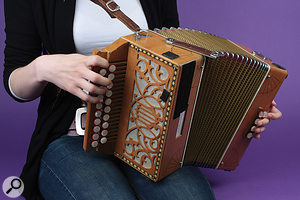 Accordions produce sound from two places — on most models from 'treble' and 'bass' ends — so it's important to recognise this when miking and set two microphones either side and slightly forward of the instrument.This also helps to explain why omni mics are preferred in this role, because otherwise the close mic would have a far stronger bass response, due to the proximity effect, than the more distant mic, and odd tonal effects could result. By combining the outputs of both mics at equal gains but in opposite polarities, the similar level of ambient noise from each will cancel to a very large degree, whereas the significantly different levels of the wanted close sound from each mic will hardly cancel at all. Of course, there will be a slight level reduction of wanted sound in comparison to using just the close mic on its own but, given the 30dB‑plus of ambient noise reduction gained by this technique, that's usually a side‑effect well worth suffering when working in very noisy conditions.

The physical spacing between the two mics inherently introduces a small, but finite, time delay, and so when the two mic signals are mixed together, the frequency response will inevitably become comb filtered. However, if the distance between mics is only an inch or so, the first deep comb‑filter notch will be well above any significant, important component of the human voice, and the rest won't have any material effect on the sound quality either. To return to your original statement, this noise‑cancelling technique really requires two identical mics spaced a precise distance apart. Most of those old festival concert photos show completely dissimilar mics mounted with their capsules more or less coincident, which lends weight to the suggestion that they were for separate recording and PA feeds, rather than exotic noise‑cancelling techniques.

The Grateful Dead developed a version of this noise‑cancelling technique because of the very unconventional PA arrangements they used to employ, with all of the PA set up on stage behind the band as a 'wall of sound'. In this way the band heard exactly what the audience heard (no need for separate monitors!). It was a clever system, with each musical source having its own set of amps and speakers to improve headroom and minimise distortion.