Q. Why does my stereo imaging suffer when I move my head? 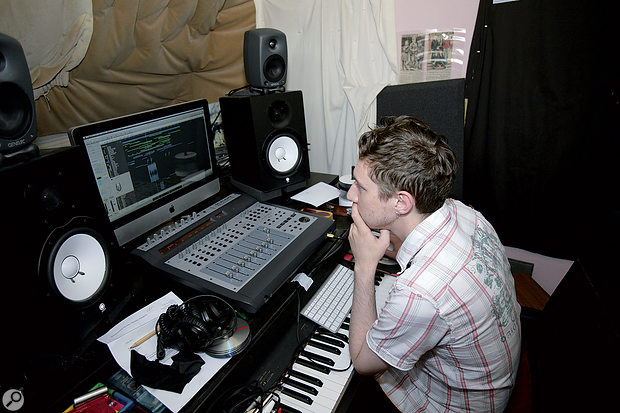 The closer you are to your stereo monitors, the smaller the listening sweet spot — and the greater the change in stereo imaging when you move your head.

When I sit at my listening position, at the apex of an equilateral triangle with my monitors, everything sounds OK. I have a good stereo image — some sounds even seem to come from a point wider than the speakers — depth is also perceivable, and things panned centrally really do sound like they are floating in front of me. So I’m happy with how it sounds. When I shift my head just a little bit to the right or to the left, though, the things that were panned centrally move immediately to the side, and seem to come just out of that one speaker.

Is this the way it’s supposed to be, or should it not be that extreme? I can still hear everything else coming from the other speaker as well, so I have a good sense of what’s going on, but if it’s not supposed to be like this, what should I do to solve this issue?

SOS Technical Editor Hugh Robjohns replies: The perception of sound sources floating in space between the speakers is a handy illusion discovered and explained by Alan Blumlein in the 1930s. In essence, each ear hears both speakers, but with slightly different times of arrival, because they’re at different distances. Naturally, the sounds from both speakers combine at each ear, creating a new composite waveform, and the crucial part of that process is that the apparent time of arrival of this composite waveform is dependent on the relative signal levels reproduced by each loudspeaker (as well as any intentional timing differences between them).

Since adjusting signal levels is much easier than adjusting their relative timing, we generally use pan-pots to control the apparent spatial position of sources within the stereo field. With the pan pot central, identical levels are reproduced from both speakers, and the apparent time-of-arrival at each ear is exactly the same. Consequently we perceive that as implying a central sound source.

In contrast, if the signal is panned away from the centre, the level from one loudspeaker is louder than the other, and these signals combine at the ear in such a way that the perceived time-of-arrival is earlier for the ear on the louder side. We then perceive that as a shift in the stereo image towards the louder speaker. To quantify this effect, a level difference between channels of about 6dB is sufficient to cause the image to move roughly halfway towards the louder of the speakers.

As I mentioned earlier, the relative timing (and phase) of signals from the two speakers is critical too, and a time delay between the channels of just 0.6ms (equivalent to moving six inches away from the source) will also move the image roughly halfway towards the earlier side.

This bunching effect, then, is inherent in the way stereo monitoring works. It’s entirely normal, and there’s nothing you can really do about it. And that’s why we have the notion of a ‘sweet spot’ where the imaging is accurate and stable, which is the listening position at the apex of the equilateral triangle when the monitor speakers are at the other corners. The further your listening position is from the speakers, the less impact a small physical movement to the left or right will have on the imaging, and the larger the sweet spot will appear to be. In your case, I suspect you are probably sitting pretty close to the speakers, which is why a relatively small movement on your part results in a significant shift in the stereo image.