Q. Why does my track seem slower when I listen on headphones?

I produce electronic dance music. Much of the time I work with headphones on, to help me focus on detailed sounds in repetitive loops. However, I often notice that when I switch to listening on speakers (to check the actual mix and so on) the track seems a bit faster. What could be the cause?

I'm not talking about a big change — a track that's, let's say, 130bpm seems to gain at least 2-4 bpm when I listen over speakers as compared to listening on headphones. Is this an actual phenomenon or should I just call a shrink? 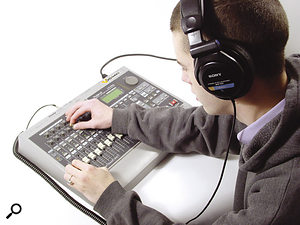 Monitoring on headphones rather than speakers can change your perception of the music in more ways than you might think...Reviews Editor Mike Senior replies: You're not the only one to experience this — I've often noticed the same effect when mixing my tracks and comparing between different monitoring systems. The apparent increase in speed is related to the differences in the frequency responses and dynamic ranges of the different playback systems. This is what causes the effect, but why this is the case is rather more complex, and has to do with the mysterious subject of psychoacoustics and auditory cognition.

A rule of thumb is that there is a rough correlation between the degree to which the music is rhythmically subdivided, and how fast or slow it is perceived to be. To take a simple example: an hour is likely to appear to be going by much slower if considered in terms of seconds as opposed to minutes. This might seem a rather philosophical point having little to do with the actual experience of listening to music, but try it for yourself — a straight kick-snare pattern sounds faster at the same tempo than one with a hi-hat subdividing the gap between each kick and snare hit. This has profound implications for rhythmic music, not only in terms of the overall track, but also from moment to moment in the timeline.

I'd suggest that your headphones are giving you better high-frequency response and better isolation from room noise than your speakers are, so your higher-frequency percussion and rhythmic instrument transients (which I'd guess are subdivided more finely than, say, your kick drums) are becoming more subjectively audible. Following the above rule of thumb (more subdivision = slower perceived speed), the track sounds slower in headphones than on speakers.

This is only one instance of the way in which perceived time/duration can drift against absolute time/duration. It's really important to recognise that this split between perceived and absolute time exists, especially when producing any music that must 'groove', because I've found that there are a lot of situations in the production process when you have to consciously adjust for your perceptions in order to get the best final results.

In a way, these issues are unique to programmed or sequenced music. A group performing live (if they're any good) will subconsciously adjust the actual tempo they're playing at to produce what is perceived as a steady beat. It's only when we come to map the individual musical events out on a mathematically regular grid that we discover they are 'out of time'. A heavily quantised, entirely regular rhythm will often sound lifeless or wrong, and you should always trust your perception of the way the music feels over what the sequencer tells you.

Another thing to consider is the way in which you interact with the music when listening. Nodding your head or tapping your feet can add extra elements of rhythm to what you 'hear', over and above what's actually on the record, a point I raised in Sam Inglis's piece on using tempo changes in computer sequencers in SOS November 2002, which is worth a read.

The basic point, though, is that this phenomenon does exist, so the best thing is to embrace its effects and learn to control it to your advantage, rather than trying to ignore it and questioning your own sanity!