Q. Why doesn't live music sound good through my earplugs?

I wear custom-made earplugs when I go to live gigs, to protect my hearing. These have physical (and therefore passive) filters, but I find that their frequency response is less than ideal, and it takes some of the enjoyment away from many concerts that I've attended.

Recently, I saw a guitarist perform wearing a pair of closed headphones. He used these for both hearing protection and personal foldback purposes. The combination of a good closed headphone, a set of decent microphones and an amplifier, all built into a headset, would be an ideal solution for me (although it would look ridiculous). However, I don't know if this type of 'active hearing protection' is commercially available.

Technical Editor Hugh Robjohns replies: The idea of hearing protection is to reduce the level (and/or duration) of noise reaching the ears, and the easiest and best way is a simple broadband attenuator fitted in the ear canals. The fit is critical, of course, to ensure that sound can't find a way in around the earplug, and although some of the the generic earplugs work well, the best and most comfortable solution is to have a set of customised personal earplugs made, as you already have. 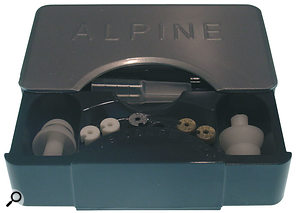 These passive earplugs, which are made by Dutch hearing-protection equipment manufacturers Alpine, can be fitted with different filters and ear-moulds.The big problem, though, as you point out, is that in musical applications we don't want to reject as much sound as possible; we want to reduce it by a reasonable amount, while retaining a flat frequency response. This last point is critical, as most earplugs are intended for industrial applications, where the aim is to reduce ambient noise levels as much as possible, while still allowing speech to be intelligible so that wearers can communicate.

Speech requires only a relatively small bandwidth, hence the non-uniform frequency response of the common filters that you mention. Most offer much greater attenuation at high frequencies, so music sounds dull and unbalanced.

However, there are specialist companies that manufacture earplugs and acoustic filters that are intended specifically for musicians and DJs, and which maintain a broadly flat frequency response while providing a useful degree of attenuation. For example, in the UK I have found that Sensorcom (their web site is at www.sensorcom.com) are one of the best and most helpful companies when it comes to understanding the key issues and coming up with the solutions from a musician's perspective, but there are others.

Solutions like the Alpine Musicsafe product (which I use myself) employ passive designs, either with generic or custom-moulded earplugs, and a range of interchangeable filters to provide varying levels of attenuation. 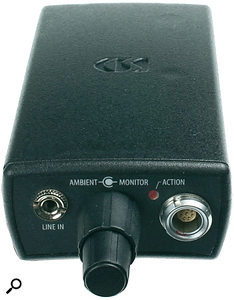 I don't know the specifics of the monitoring system that was being used by the performing guitarist you saw, but I would hazard a guess that he was simply wearing closed-backed headphones to help reduce the ambient noise a little, while also having his monitor mix relayed to enable him to hear what he was doing clearly. In a really noisy environment, you could use proper industrial noise-protecting headphones for greater reduction of ambient noise. But I would be very surprised if there was any 'active noise reduction' going on here. Also, the attenuation provided by ordinary headphones won't have anything like a flat frequency response anyway, so you're not much better off!

In-ear monitors are generally intended simply to provide a clearly audible monitor mix, and to avoid the problems with floor wedges and high volumes of foldback on stage. They do attenuate background noise, but only as a side-effect of the fact that there's a great lump of plastic filling up your ear canal; and they don't attenuate noise linearly. 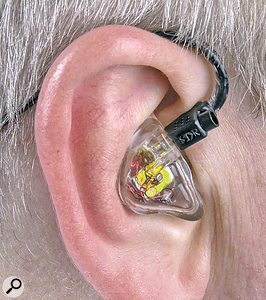 Westone Gennum's SD1 is a system that employs sub-miniature microphones mounted on custom-mouldable earpieces. The signals from the mics are fed through a DSP in the belt-pack (which can be configured using Mac and PC software), then fed to the user's ear. The wearer can set the amount of ambient signal they hear, while benefiting from the tight seal of the ear-mould. A relatively new development (check out page eight of SOS February 2007) is about as close as you'll get to your ideal solution. The Westone Gennum SD1 (www.in-earmonitor.com) is a very clever system that uses earpieces fitted with custom moulds, fed with the output from a binaural pair of microphones, which are mounted on the outside of the ear-moulds. The mics' signals are routed through a digital signal processor in the SD1 belt-pack, then sent back to the wearer's ear. This allows the wearer to control the listening level and frequency response of the signal they hear. It's expensive, though, and I've never used one, so I'm not sure what the quality would be like. While this system could be described as 'active', it isn't what is normally meant by active hearing protection.

Active hearing protection is used professionally in applications such as aircraft pilots' headsets, as well as in various consumer systems intended for listening to music while in noisy environments. But I don't think there are systems available for the kinds of application you are talking about (listening to music at live gigs). Active noise cancellation tends to be most effective for relatively constant lower-frequency noise, such as the roar of aircraft engines and train wheels. This ability to reduce LF noise through cancellation is handy because most passive solutions aren't as effective at low frequencies; but by combining the two approaches you can create a very effective hearing-protection system (albeit a bulky one). However, there is a down side, which is that active noise cancellation introduces an unpleasant phasey character to mid-range frequencies. That's not a major concern if you're flying a plane across the Atlantic, but it doesn't make listening to music a very enjoyable experience.

Personally, I think the most practical and effective solution is to use passive attenuators in the form of custom-moulded earplugs, but make sure they are professional designs intended specifically for musicians. They aren't perfect, and in an ideal world they wouldn't be necessary, but I've found them to be perfectly acceptable and very practical.