Q. Why would an element in a mix be audible in both the Mid and Sides channels? 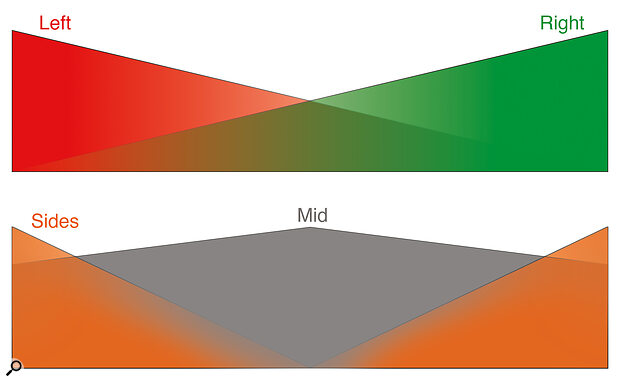 A representation of the information carried by the Left, Right, Mid and Sides channels.

I’m trying to understand the panning being used in a particular song in which the verse has a guitar that appears to be almost completely right‑panned. However, in the chorus the guitar comes in on the left too, so that it can be heard on both the left and right channels. What’s confusing me is that if I audition the Mid and Sides channels independently, the guitar is audible in the Mid but also in the Sides channel.

SOS Technical Editor Hugh Robjohns replies: The short answer is that anything panned or positioned fully left or right in the stereo image must, by definition, appear equally in both the Mid and Sides channels. The longer answer involves considering the (simplified) maths of the Mid‑Sides matrix: Mid = Left+Right and Sides = Left‑Right. You could also express Left‑Right as Left+(‑Right), with (‑Right) being a polarity inversion of the Right channel.

For a guitar that is panned hard‑left, there is no content in the Right channel at all. Therefore we can remove the Right channels, whether positive or negative, from the equations above. That leaves us with Mid = Left and Sides = Left. That’s why the guitar would appear in both the Mid and Sides channels, at equal volume.

I suspect your confusion might be because the term ‘Mid’ is slightly misleading — this channel doesn’t carry only sounds that are panned to the centre. It actually carries signal from across the whole stereo image, because it is exactly the same as a mono summation. However, it does slightly emphasise sounds around the centre relative to sounds at the edges. In contrast, the Sides channel carries signal from everywhere except the exact centre, emphasising the wider‑panned sounds relative to those nearer the centre, and conveying the two sides with opposite polarities.

If you’re left in any doubt, have a look at the image above that accompanies this reply — hopefully this can help you to visualise what content the Left, Right, Mid and Sides channels convey.