Antares Auto‑Tune is a powerful pitch‑correction tool which is already an industry standard for tightening up vocal performances. As Paul White explains, however, it has the potential to do much more...

Antares Auto‑Tune is, in my view, one of the few truly innovative musical developments of the past couple of years. Other devices may employ more novel technology, but Auto‑Tune provides a practical answer to the very real problem of pitching imperfections, via an easy‑to‑use box or software package. We've reviewed both hardware and software versions of Auto‑Tune in SOS already, though there's a more recent addition to the series in the shape of Auto‑Tune LC, a low‑cost VST plug‑in that offers all the functionality of the hardware version (with the exception of external MIDI control) for under £100. A DirectX version of Auto‑Tune is also available for those working on the PC platform, so just about anybody who needs pitch correction can now access it affordably. What's more, at least two other companies are planning hardware or software products that do the same kind of job (indeed, TC Electronic's Intonator is reviewed in this issue of SOS, starting on page 198), so I foresee this being a growth area.

The main function of Auto‑Tune is to tighten up vocal pitching, something it does very well, but I've since experimented with the system and found that it can also be used to produce creative effects and to improve monophonic instrument performances. This article is not a re‑review of Auto‑Tune, but rather a look at some of its less obvious applications. 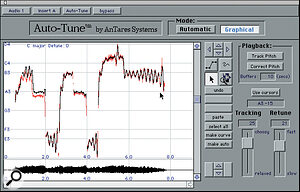 You may be more familiar with Auto‑Tune in its plug‑in software incarnation, available either in VST or TDM formats.

Before setting out to use Auto‑Tune, it's useful to have a general idea of how it works. In order to correct pitch, a system such as Auto‑Tune needs to be able to read the pitch of the incoming signal. This is only really possible with monophonic sources at present — the algorithm was apparently a spin‑off from work in analysing seismological data, and it seems well adapted to tracking the pitch of the human voice.

Once the pitch has been detected, Auto‑Tune then uses pitch‑shifting techniques to change the pitch of the original sound to match the nearest note in a user‑definable scale. It is possible to leave Auto‑Tune set to a chromatic scale (ie. one containing all notes), but then it's likely the pitch of a badly sung note could be corrected to an 'illegal' (out‑of‑key) note because that's what it happened to be nearest to. Far better to input only those notes the piece of music is using — then the worst that can happen is that a horrendously badly pitched note will be corrected to the wrong note in the right key

Forcing incoming notes to the right pitch is only part of the story, because if that was done too efficiently, you'd end up with a very flat, pitch‑quantised vocal performance. Fortunately, there's a slider to adjust the rate at which correction takes place: by adjusting this carefully, natural bends and vibrato are allowed through unaltered, but as soon as the input settles on a specific note for any length of time, it's pulled into perfect pitch. This was demonstrated most impressively at the Frankfurt MusikMesse by demonstrator Gerry Basserman, who used a theremin as the input source. With the tracking set to fastest, the theremin sound was changed so that it would only produce discrete, stepped pitches, just like a keyboard. However, setting a longer correction rate allowed Gerry to play the instrument apparently normally — except that when he settled on a note, it always slid into perfect pitch. As he himself confesses, this made him sound a much better theremin player than he is — though to be fair, he's actually pretty good anyway!

Because Auto‑Tune doesn't use any kind of formant correction, any sound pulled far from its original pitch starts to sound unnatural in the same way any conventionally pitch‑shifted signal does. In normal use, this isn't a problem, because the usual amount of pitch correction is less than half a semitone, but the effect can be abused in creative ways by deliberately setting large intervals. For example, you could set up a target scale containing only octaves and fifths, then sing a load of made‑up 'pseudo‑ethnic' nonsense to see what comes out the other end.

In this instance, the voice timbre is transformed proportional to the pitch difference between what you're singing and what the nearest scale note is set to. For example, you can sing a steadily rising tone and there will be no pitch change until you got within range of the next note in the target scale. However, the timbre of the fixed note will change as the pitch shifter works harder and harder to correct it. In this example, the pitch‑shifter will attempt to push the pitch of the note down to compensate for you singing higher, so the timbre will take on a darker, bigger quality. Then, when you get within range of the next note in the scale, the timbre will flip as the pitch‑shifter tries to push the pitch upwards. Gerry worked a few examples of this type into his demo and I have to say the resulting 'pseudo‑world music' was most convincing.

I was recently asked to do an album of music themed around the solar eclipse, and this provided the perfect excuse to use Auto‑Tune for something other than vocal correction. For one of the tracks, I wanted to use a wooden North American Indian flute I'd picked up on my travels, but there were two problems — I couldn't really play the flute very well, and the notes it produced were just far enough off concert pitch to be irritating. The first problem I got around by a mixture of practice, bluffing and hard‑disk editing, while the second required the software version of Auto‑Tune programmed to the same pentatonic scale as the flute. I set a slowish tracking time so all the note bends and trills would get through unaffected and let nature take its course. The result was a perfectly natural‑sounding flute part with all the sustained notes nicely in tune — it even surprised me! This was the first time I'd tried Auto‑Tune on a source other than a voice, but the tracking algorithms seemed to have no difficulty at all dealing with it.

The next test was to try Auto‑Tune on a slowish lead guitar part that featured a lot of 'long' string bends and tremolo arm tricks. Though I don't play guitar nearly as much as I should, my pitching while bending is normally pretty good, but a slowish pitch‑correction setting on Auto‑Tune really added polish and precision to the performance. On the occasions that I picked double notes, Auto‑Tune just ignored me — it only seemed to take effect when I was sustaining a single note, and of course the slow pitch‑correction setting allows any vibrato to come through normally. Considering the complexity of a distorted guitar waveform, Auto‑Tune tracked it very well with no glitches or warbles. I also conscripted Paul Farrer's help to test Auto‑Tune on some cello parts he was recording, and he reported the experiment a great success.

The more you think about it, the more applications there are for this amazing tool — using it just to polish up vocal tracks really is under‑exploiting its true potential.

When Cher featured that distinctive vocoder effect on her 'Believe' single, a lot of us thought that it had been done on Auto‑Tune, though as the February '99 SOS article revealed, that proved not to be the case. Nevertheless, you can get a very good approximation of that same effect from Auto‑Tune simply by setting the pitch‑correction rate to its fastest setting and entering the appropriate scale for the song. I tried it as a bit of a joke and found it uncannily like the real thing — it's a shame that after just one outing, the effect is already a cliché to avoid. A side‑effect of using very fast pitch correction is that shallow vibrato is ironed out altogether, while deeper vibrato turns into a trill. Normally you wouldn't want this to happen, but when you're being creative, little accidents like these can produce very usable results. Auto‑Tune also has the ability to add delayed vibrato to whatever sound is being processed, so in theory, you can strip out the vibrato from the original performance and replace it with something far more mechanical and precise.

Auto‑Tune is so effective that I'm always adding to the mental list of things to try out with it. Monophonic slide guitar should be easy enough to fine‑tune, but then there's the option of speeding up the pitch correction and turning it back into a chromatic instrument. Set a musical scale and you have the makings of an electric slide dulcimer!

By the same token, those who can play just a little fretless bass, cello or violin might find that their efforts become a lot more musically useful after a trip through Auto‑Tune. Certainly Paul Farrer's experiment showed that a reasonably well‑played cello part could be made to sound much more precisely pitched without the result appearing to be processed.

One function of the ATR1 (the hardware version of Auto‑Tune) I haven't mentioned yet is its ability to shift pitch according to a MIDI input. In theory, this means you can input a MIDI melody and whatever audio input you have fill be forced to fit that melody. With careful setting up, you can get very natural results, but how about striving for the unnatural by making the human voice sing impossible arpeggios or taking a single‑note instrument like the digeridoo and forcing it to play a melodic bass line? The more you think about it, the more applications there are for this amazing tool — using it just to polish up vocal tracks really is under‑exploiting its true potential.