Avoiding Latency Problems When Recording In A Computer Studio 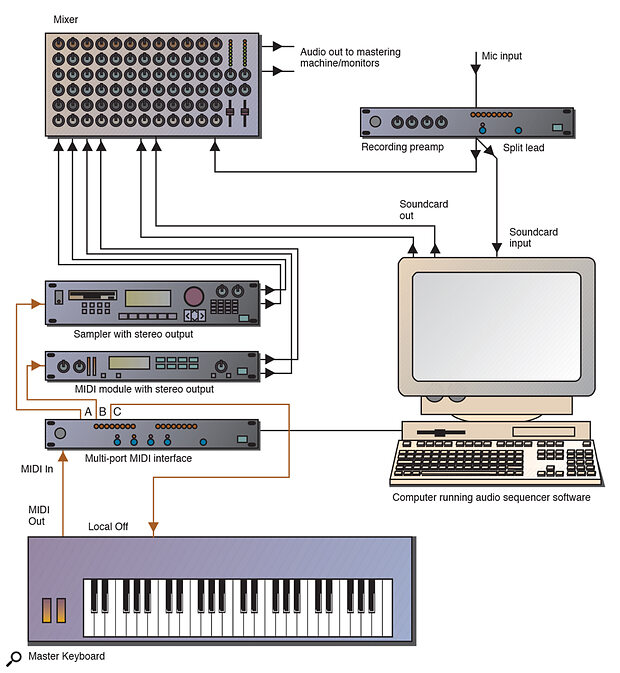 Figure 1: Thru monitoring via a mixer.

Paul White examines how a simple computer‑based studio can be hooked up with a mixer to provide zero‑latency monitoring during recording.

Over the past few issues of SOS, we've made a particular point of discussing latency in the context of 'soundcard studios' (see, for example, Martin Walker's feature on the subject in SOS April '99), as it's an area manufacturers tend to skirt around, and often users don't understand the full implications until after having parted with their money. Latency is, for those who've just joined us, that infuriating delay between sound being fed into a computer‑based recording system and the same sound emerging via the audio outs. On a well‑designed system, this latency may only be a few milliseconds, in which case few people will even notice it's there, but other combinations of hardware and software can throw up delays of more than half a second — and nobody can play in time with that going on! As a rule, latency is only a serious problem when overdubbing — you hear the already recorded tracks with no delay, but whatever you're trying to overdub comes back to you with delay, which throws your timing completely.

Some manufacturers have introduced hardware and software approaches to minimising latency: soundcard drivers conforming to Steinberg's ASIO 2.0 protocol, on the software side, allow input sounds to be routed to the card's audio outputs with minimal delay, while on the hardware side, some newer soundcards feature integral DSP effects and 'thru monitoring'. If you already have a system and latency is giving you trouble, however, what can be done?

Unless you have an extremely simple system where you rely on the same soundcard to provide synth sounds and audio recording, you're going to need a mixer to combine the output from your soundcard with the outputs from your external synths, samplers and drum machines. Furthermore, unless you're going to trust all your audio processing to VST plug‑ins or similar computer‑powered virtual devices, you'll need a recording preamp with an integral compressor so you can even out your vocal levels during the recording stage.

Assuming you have these things, you can set up a simple system where the output from your recording preamp is split to feed both the mixer and the soundcard input. At its simplest this could be a Y lead (it's always OK to split signals this way, but not to mix them!), but you'll find many recording preamps have two outputs anyway, often one on a jack and the other on an XLR. If this is the case, feed the jack output to the soundcard, and then make up a balanced XLR to balanced quarter‑inch jack lead to feed your mixer's line input. You might get away with using an XLR lead to plug directly into the mixer line input, but only if your mixer has a pad switch and plenty of range (in the turning down direction!) on the input gain trim. If you don't have a recording preamp, you may be able to use one of your mixing channels instead, providing it has a direct output (or insert send) to feed to the soundcard input.

After recording, you'll need to unmute the track output before you can hear it (if that's what you did to kill the delayed monitor signal), and you may also want to mute the mixer channel you used for monitoring your recording preamp, otherwise your live mic will still be feeding the mix. Other than that, you're in business.

One limitation of this system is that because you're bypassing the computer when monitoring your overdubs, you won't be able to hear the effect of any VST plug‑ins until after the track has been recorded. This is one occasion when I feel the expression 'better never than late' is justified. If you need reverb to help you sing better, you can still hook up a regular hardware effects unit to your mixer and add as much monitor reverb or echo as you like — it won't be recorded. The complete setup is shown in the diagram opposite.

If you're doing a punch‑in recording to patch up a mistake, using thru monitoring as described means you won't be able to hear the original track, as it will be turned down or muted. A practical workaround is to record the punch‑in part on a new track, then paste it into the original track once you've got it right.

When you're working with low‑cost equipment, some workarounds are nearly always necessary to get the results you need, but that's the price you pay for not buying pro recording hardware costing orders of magnitude more. In most cases, the workarounds are fairly simple, and as this article illustrates, the effects of monitoring latency can be eliminated by a little extra patching and switching. Indeed, this particular workaround can make all the difference between a computer studio being useable or unuseable.

If you don't use a separate mic preamp or voice channel, and you have only a basic 'something‑into‑two' mixer with no routing capability, you can still overdub and monitor through the same mixer simultaneously providing the mixer has at least one spare pre‑fade aux send and one unused channel. Let's assume you have an 8:2 mixer where channels 1/2 are handling the stereo output from your soundcard while channels 3 to 7 are used to accommodate synths or other external sources. This leaves you with one spare input channel (channel 8) that you can use as a mic or line preamp for recording.

During overdubbing, turn up the channel fader so you can hear what you're playing (and mute the through monitoring in your software so you don't hear the latency‑delayed version as well), but when you come to play back, turn the channel 8 fader down so you don't have a live mic feeding into the mix. If you have a mixer with two pre‑fade sends and two spare channels, you can expand on this technique to overdub stereo parts.