Altiverb On PC — How Good Is It?

With a world-class bundled Impulse Response library and a good range of manipulation controls, the PC version of Altiverb is a strong new contender if you're about to buy a convolution reverb plug-in.

The Altiverb convolving reverb plug-in arrived on the PC platform earlier this year. We find out how it stands up to the convolution competition, as well as bringing you the usual crop of PC news and tips.

Since its release in 2001, the Altiverb reverb plug-in, from Dutch developers Audio Ease, has gained an enviable reputation for its audio realism. For the first three of those years it was arguably the only convolution reverb plug-in around, but until recently PC users could only admire it from afar, as it was only available for the Mac platform. However, in May 2006 v5 was finally released for Windows XP users, supporting VST and RTAS formats, so I've been very keen to try it out. We've already reviewed both the original Altiverb (in SOS May 2002) and the Mac version 5 (SOS September 2005), which you can read online at www.soundonsound.com, so I'll concentrate here on PC-related aspects of the software.

The Altiverb interface is identical to that of the Mac version, with the same handy display of IR (Impulse Response) waveforms or waterfall response, plus photos and occasionally a spinning virtual-reality movie of the currently loaded acoustic environment. Far from being a gimmick, this pictorial feedback (particularly the waterfall response) helps you choose the most appropriate reverb for a particular application.

Reverb time can be altered over a huge range, from one percent to 150 percent of the original IR, by gain expansion/compression, while Room Size uses time expansion/compression to alter the dimensions of the space. There are also three-band damping facilities and direct/early reflection/tail tweaks, a stage position facility that allows you to change the width and distance of your virtual source, a four-band EQ, and CPU metering and tweaks. All hugely increase Altiverb's versatility. With the exception of Tascam's Gigapulse, I don't think I've seen any PC convolution engine with such effective stage-positioning options before.

Getting to grips with the interface is made far easier by the optional context-sensitive help window that displays info on each parameter as you use it, and overall I found using Altiverb a very pleasurable experience. However, I do feel that its interface would benefit from a reshuffle. Currently there's lots of empty space, yet many of the controls are tiny, while the Presets and Impulse Response menus also use tiny text, which is difficult to read and also makes choosing from the drop-down menus a frustrating exercise.

One of the few benefits of the five-year wait for Altiverb to arrive on the PC is that the software now has a mature and comprehensive Impulse Response library covering Music Rooms (rooms, studios, halls, churches and cathedrals), Gear (hardware digital, plate and spring reverbs) and Post Production (inside trains, cars, forests, caverns, stadiums, bathrooms, attics and lots more). There were initially some issues with existing names that proved incompatible with the Windows XP version, but from version 5.4 onwards Mac and PC users can both download and use the same library files and transport them between the two platforms. I found the on-line IR library well organised and was impressed by its variety and quality.

However, although the Windows XP Altiverb is currently up to version 5.4.6, there are still some significant differences between it and the native Mac version, although they sell at exactly the same price ($595). The PC version doesn't support a sample rate higher than 96kHz (although arguably there would be little point if it did, especially since internal processing is done at 44.1kHz or 48kHz and Audio Ease have never measured any reverberant energy above 17kHz).

More seriously for the experimenter, the Sweep generator and stand-alone IR pre-processor utility aren't yet implemented, so currently the only way to create your own impulse responses is to rely on a Mac-owning friend or contact Audio Ease (who say they will convert your captured test files into Altiverb-format IRs, although they make no promises about turnaround time). Also, the Windows XP Altiverb doesn't support more than two output channels, which means that surround reverbs aren't currently possible unless you launch multiple instances of the plug-in.

I compared Altiverb with Waves' IR1 and Voxengo's Pristine Space and was initially hard pressed to hear any difference when playing back the same untweaked IRs through their convolution engines. However, the differences become more apparent when you study the bundled libraries and try to tweak your reverbs.

Pristine Space supports up to eight convolution channels for surround work and has a useful set of tweak parameters, but comes with no bundled library at all, although it offers easy auditioning of folders containing third-party IRs. If you're happy buying third-party IR libraries or downloading free ones of varying quality from the Internet, it's a bargain at $120. 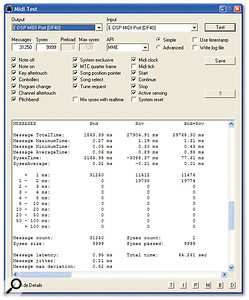 If you have several MIDI interfaces, a few minutes work with the Miditest utility could give your MIDI keyboard better latency and jitter figures, such as the ones shown here.Both Altiverb and IR1 have more sophisticated tweaking engines than Pristine Space and are bundled with world-class IR libraries, involving a vast amount of work capturing acoustic environments and expensive hardware reverbs. For many musicians, the library is the most important part of the package, and although they're slightly different from each other I think both packages score in this area.

For those who need to extensively manipulate their IRs, R1 provides the most versatile engine of the three, with unique controls such as Density, Resonance and Correlation, plus a multi-point Reverb Envelope. However, I do find IR1 frustratingly long-winded for auditioning third-party libraries, since you have to load in IR files one at a time, it can't cope with IRs longer than six seconds, and it insists that you install its library on your Windows C: partition, which bloats system backup files and complicates matters if you ever need to reinstall your operating system.

I found Altiverb a close second to IR1 for tweaking sounds, and I particularly like the fact that you can install its library on any drive/partition, rescan it on the fly after downloading new IRs, and point to completely different folders, all while continuing to run Altiverb inside a project. Also, Altiverb can use either transportable iLok authorisation or challenge-response protection tied to a single PC, whereas IR1 insists on iLok protection.

Overall, I was very impressed with the sound and scope of Altiverb, and the high quality of its library. Audio Ease face a lot more competition on the PC than they did on the Mac, and I can't help feeling that this PC version ought to be cheaper than the Mac version, since it lacks IR-creation and surround features. Nevertheless, at $595 (about £316) it's good value for money considering your continued free access to the ever-expanding on-line IR library, and still significantly cheaper than the $800 Waves IR1.

We're still getting a lot of musicians grumbling on the SOS Forums about the tightness (or, rather, lack of tightness) of their sequencer's MIDI timing, but few have realised that the MIDI interface itself can be a significant source of latency. An ideal way to test this is using Evert van der Poll's freeware Miditest, which is now at v4.4. You connect a MIDI cable between your MIDI Out and In, and then Miditest sends data to your MIDI Out and measures how long it takes to arrive back via the MIDI In.

There are two aspects to such MIDI In/Out round-trip measurements: MIDI latency and MIDI jitter (the variation in latency from notes to note). Most musicians can cope with a fixed latency, within certain limits (see 'Optimising The Latency Of Your PC Audio Interface' in SOS January 2005 for more details), but they may find MIDI jitter more annoying, as it results in uncertain timing.

I've now measured quite a few MIDI ports with this utility ( from www.earthvegaconnection.com) and have come to the conclusion that those on PCI cards and even built-in motherboard chips nearly always provide the tightest timing, with latency of 1ms or below and jitter around 0.2ms. Meanwhile, MIDI ports connected via USB and Firewire still nearly always have reasonable jitter, of between 0.5 and 1.5ms, but latency figures can be 10ms and beyond in some cases.

For the many PC musicians who have several MIDI interfaces, Miditest also has a very practical use: you can test each interface in turn to find the ports with the lowest latency and jitter, and use this MIDI Input to connect your master keyboard. After taking such measurements in my studio, I now use the MIDI In of my Emu 1820M interface, in preference to those of my more sophisticated eight-in/eight-out MIDI interface!

Subsequent to my feature on Windows XP Audio Tweaks in SOS October 2006, I've been running some songs close to the edge of my PC's capability (rather like the 'DAW Bench' test discussed in PC Notes July 2006), and have therefore been able to experiment even more with tiny things that push it into audio glitching. Although I already recommend disabling all the Windows XP display animations (fades, slides, and so on), I was still surprised at the severe glitching that occurred as soon as I re-enabled Window's 'Show shadows under menus' display option and opened some of the Cubase drop-down menus, so make sure this feature is also disabled if you want to achieve maximum DAW performance.

However, just as interesting was the extra glitching I experienced with the Cubase SX Transport bar visible, and in particular the constantly updated Time Display. Unfortunately, you can't disable this display without losing the transport buttons as well, but as soon as I did so my song glitching disappeared. Next, I customised the Cubase toolbar at the top of the screen to add the transport buttons and time display, yet my glitching didn't return — only when the same controls were returned to the Transport Bar did this happen. Opening up the Cubase mixer with all its real-time meters moving up and down certainly caused glitching with a vengeance, though.

So if you're desperately trying to get a song that's exhibiting glitches to run on your PC, remember that it's not just Windows' graphic bells and whistles that can push your CPU over the edge: the same applies to any on-screen animation that has to be calculated by your PC.