Your PC may be powerful enough to achieve very low‑latency performance, but is your audio interface letting the side down?

During the last 15 years, I've reviewed lots of audio PCs, but unfortunately I've also experienced various occasions where the audio interface that comes with the PC has held back a particular computer's ultimate performance at lower latency settings. This happened again only last month, when Rain Recording UK's Sandy Bridge PC originally turned in unexpectedly poor results with buffer sizes of 128 samples and under, using the supplied interface — and we're not talking about small differences either. Once you get down to a tiny 64‑sample buffer size, some Firewire‑based interfaces, in particular, can differ in performance by as much as 100 percent.

It doesn't help comparisons when some manufacturers add 'hidden' playback buffers on some of their models, which are intended to ensure smooth audio delivery but add to overall playback latency, while others simply double the size of playback buffers beyond your choice without telling you. However, there's no denying that your PC's low latency performance might change significantly (for better or worse) if you change your audio interface. 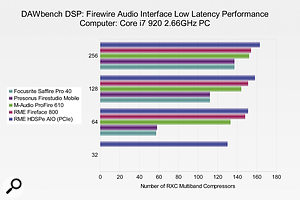 As you can see here, most Firewire audio interfaces give roughly similar performance with buffer sizes of 256 samples (and above), but the results at lower buffer sizes can sometimes be hugely different. This graph displays how many Reaper multi‑band compressor plug-ins a selection of five interfaces could manage on the same Core i7 620 2.66GHz PC running Windows 7 64-bit (figures courtesy of Vin Curigliano).

Our old friend Vin Curigliano (of DAWbench fame) has recently been exploring this area for himself with a test PC and a batch of different Firewire interfaces (along with a PCIe reference card), producing the sobering results you see here (visit http://forum.dawbench.com/showthread.php?1548-Audio-Interface-Low-Latency-Performance-Data-Base for more details). The differences tie in closely with those I've experienced, and with plenty of anecdotal forum comments.

Going On a Round Trip

But are we benchtesters getting too wrapped up in numbers and graphs? How important is it to the average musician to be able to run with tiny buffer sizes and therefore very low latency? Many keyboard players (including me) are happy playing soft synths with an interface output buffer size of 256 samples (6ms latency at 44.1kHz), which is also a common default interface setting. If you're happy with this setting, performance differences between audio interfaces are quite small and you can choose solely on the basis of features and audio quality.

On the other hand, guitarist or vocalists who want to listen to a performance through plug‑in effects will experience a double round‑trip latency (once through the input buffers and again through the output buffers), and they are likely to demand a maximum buffer of 64 samples (around 3ms total buffer latency at 44.1kHz). Electronic drummers also need tight timings and may benefit from similar settings, so in this scenario your low‑latency performance becomes rather more important.

To find out what buffer sizes are preferred by the majority of musicians, I've started a poll on the SOS Forums (/forum/showflat.php?Board=MRT&Number=919292). Why not add your vote, so we can let manufacturers know how many of us do rely on low‑latency performance? Even the initial results indicate that quite a few musicians would like to drop to 64 samples but can't because their systems run out of steam.

Occasionally I stumble across a developer releasing genuinely different products that deserve exposure to a bigger audience, and Twisted Tools (http://twistedtools.com) fall into this category. Although TT have a few stunning sample packs, most of their products are Ensembles for NI's Reaktor 5. The most recent is Scapes, described as 'a real‑time effects processor and sound generator based on feedback', although this description doesn't prepare you for the stylish animated interface and versatile warping options. 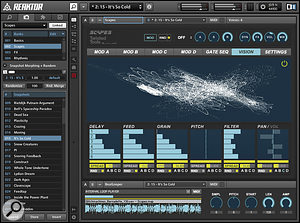 Scapes, from Twisted Tools, is more powerful, yet more fun, than any 'real-time effects processor and sound generator' has any right to be.Essentially, Scapes is a collection of six independent granular delays with extensive modulation options, a gate sequencer, and a host of synth‑like controls. Although you can use it as a tempo‑sync'ed multi‑effects unit for live audio or any of the 220MB of bundled samples, once you start adding feedback and LFO modulation to the various parameters you move into Forbidden Planet territory, generating sci‑fi effects, evolving soundscapes and rhythmic motifs. The results are decidedly futuristic, but don't assume that Scapes is only capable of discordant warbles: I coaxed melodic and organic sequences from it, while browsing through the several hundred presets shows what can be achieved with practice. If you have Reaktor and are feeling creative, $49 will keep you generating original sounds until long after the cows come home.
Buy PDF version
Previous articleNext article