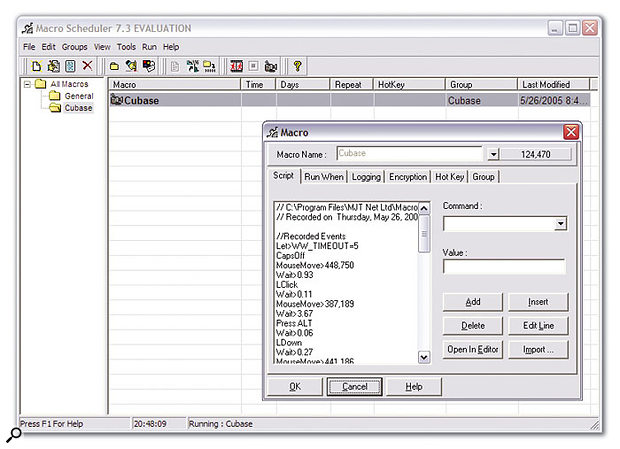 While it's a little more daunting than applications such as Quickeys, Windows users who like to dabble in writing their own scripts might find Macro Scheduler a useful tool for enhancing workflow in Cubase.

We investigate an interesting script for exporting audio and look at the various options for automating tedious tasks in Cubase.

While trawling through Cubase.net this month, I came across an interesting post (www.Cubase.net/phpbb2/viewtopic.php?t=15100) from a user who's created a stand-alone script that can automate the process of bouncing multiple tracks in Cubase. Say you have 10 tracks and you want to export each one as an individual audio file, with all the effects processing for that track. Normally, you'd have to solo the first track, export the audio file, wait, solo the next track, export the... you get the idea!

With the snappily-named SX Unattended Audio Export Tool, you set everything up as if you were going to export audio in the usual way. Indeed, the first track you'll still need to bounce manually. The reason for this is so that you can set up the export parameters that will be used for all the other files and the path to where the exported file will be stored, since the Export Audio window always defaults to the last-used settings. Once you've bounced the first file, select the track containing the next chunk of audio and run the tool.

After a couple of explanatory messages, you'll be prompted for the number of tracks to export and a base file-name: the tool will use this plus an automatically incremented number for the file-names. The script will then run by enabling solo on the selected Track, exporting the file, disabling solo, moving to the next track down and repeating this process the number of times required.

You'll find information this month concerning Cubase and Tiger compatibility in both Apple Notes (starting page 278) and the 'Tiger for Musicians' article (starting page 136). Generally speaking, the latest version of Cubase seems to work fairly well with Tiger, but one Cubase and Tiger problem not mentioned in the other articles is an issue with the installer for Cubase SE/LE v1.0.7, which basically doesn't work.

Steinberg are preparing an update and recommend that SE users contact their local Steinberg distributor, while LE users should contact the distributor of the hardware device they bought that had Cubase LE as part of the bundle. Otherwise, SE/LE 1.0.7 users should make sure to install their software before upgrading to Tiger, if possible. Interestingly, anyone who received Cubase SE v1.0.6 as part of Steinberg's Studio Case bundle should have no problem installing this software under Mac OS 10.4.

Tales From The Script

Although Cubase has a macro facility for creating Key Commands that are made up from a sequence of individual Key Commands, this feature is unfortunately too basic at the moment to allow something like the Unattended Export Tool to work: there's no option for user interaction, or the ability to wait for one process to finish before issuing the next command. However, by using a separate, more generic utility that can issue user-interface commands to applications running on your system, such as Cubase, and that provides a certain amount of programmable logic, you can create more elaborate macros than Cubase would otherwise allow.

This concept isn't new, of course. Users have been creating custom Key Commands and sequences of commands for many years with utilities such as Quickeys, which allow you to either record or program a sequence of events and play them back via a keyboard shortcut. Quickeys (www.quickeys.com) is now sold through Startly Technologies and is available for both Mac OS X (including a new, Tiger-compatible version) and Windows, priced at $99 for a single-user license that can be purchased online. A cheaper alternative Mac OS X users might like to check out is Script Software's iKey (www.scriptsoftware.com/ikey), and the application used to create the SX Unattended Audio Export Tool is MJT Net's Windows-only Macro Scheduler (www.mjtnet.com). The latter enables you to record and edit scripts using a scripting language, rather than graphical building-block elements like more user-friendly utilities such as Quickeys and iKey. However, while it takes a little more time and programming experience to learn, Macro Scheduler is a powerful way to automate workflows in Cubase.

Macro Scheduler is available in both a Standard and a Pro version, which you can purchase online from MJT Net's website for $75 and $175 respectively. The Pro version allows you to compile your script into a stand-alone application, which is great if you want to run scripts without Macro Scheduler installed and share your scripts with other users.