Are you stuck on the PC upgrade bandwagon? This month, PC Notes discusses whether it might be possible to step off it, as computer power finally starts to catch up with the needs and aspirations of musicians.

When I first started writing for SOS, way back in 1996, my PC featured an Intel 486DX33 (33MHz) processor, 4MB RAM, a 250MB hard drive and a Sound Galaxy Basic 16 (16-bit only) soundcard. It seems incredible just how far we've come with PCs and music over the last 12 years, and how increasing processing power has kept on moving the goalposts.

For me, the first revelation was the 'plug-in', which arrived in late 1996 with Steinberg's Wavelab 1.5 and Sonic Foundry's Sound Forge 4.0a (now part of the Sony Creative Software range). Being able to add further functions to an existing application was truly liberating, and for the first time musicians could treat an audio signal with effect algorithms in real time within their software.

However, even a single metallic-sounding reverb plug-in of the time could easily consume 100 percent of your available processing power, so I upgraded to a faster PC with a Cyrix P166+ processor (clock speed 133MHz), 16MB RAM and a 1GB hard drive. I had just climbed onto the upgrade bandwagon, and during subsequent years I formulated two good rules of thumb, although one eventually proved less durable than the other:

Sure enough, two years later I upgraded to a Pentium II 300MHz processor, 64MB RAM and a 30GB hard drive, largely so that I could run some of the new real-time soft synths, such as Native Instruments' Generator (later to evolve into Reaktor). This machine lasted me another couple of years until I was desperate for more processing power and switched to a Pentium III 1GHz processor, 256MB of RAM and a couple of 30GB hard drives. Two years later, in late 2003, the next upgrade became essential to cope with all the latest software, and this time I bought a Pentium 4 2.8GHz processor, 1GB of RAM and a couple of 80GB hard drives. 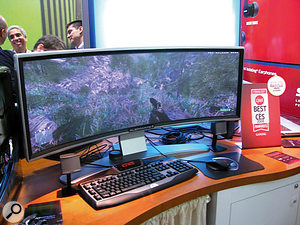 If you fancy a single monitor-screen equivalent to two large monitors placed side by side, look no further than Alienware's new curved display, with a resolution of 2880 x 900 pixels.

However, at this point, while my second rule of thumb still held true, the first began to break down: I was happy with this machine for three years, and it would still be perfectly adequate had I not decided to abandon my MIDI hardware synths and move over to entirely 'in the box' song creation with soft synths and software samplers.

So in December 2006 I invested in an E6600 dual-core CPU with two cores running at 2.4GHz, offering a colossal 300 percent increase in processing power over my previous machine. Even a year later this might seem like small fry compared with today's quad-core processors, yet the majority of my songs have yet to use more than 50 percent of this dual-core model.

Over the last couple of years I've noted a growing number of musicians also getting off the PC upgrade bandwagon. While some are currently buying and building quad-core machines, others decided some time ago that they were perfectly happy with the hardware and software they were already running, especially if it was rock-solid and bug-free.

Available computing power finally seems to be starting to outstrip the needs of musicians, and many of us no longer have to compromise when choosing plug-ins and soft synths. Moreover, MIDI + Audio sequencers now contain so many functions some of us never use that an increasing number of musicians are not bothering to upgrade them any further. Will I find myself desperate to trade up my PC again in late 2008? Somehow I very much doubt it.

VST Instruments are now the foundation of many a musician's sonic arsenal, and are getting ever more sophisticated. To keep pushing at the boundaries, some rely on the latest physical or analogue modelling techniques, but with many designs it's the associated sample library that provides the sophistication, and nowadays this generally means many megabytes and sometimes even gigabytes of sample data.

All you need to do to install the majority of simpler VST plug-ins and Instruments so that they appear within your chosen VST host application is to place the DLL file (containing the synth code itself), plus any associated presets, in the default 'vstplugins' folder on the same C: partition as your Windows operating system. Most larger VST Instruments also store their DLL file in the VST plug-ins folder, but provide the option to install the associated sample libraries on a different partition or drive. This is good news for those who want to keep their Windows partition as small as possible, so that backup files are quicker to create and smaller to store. However, just recently I've noticed musicians grumbling about various large VST Instruments that don't offer such a storage option, such as Toontrack's EZdrummer, with 1.5GB of compressed files; Manytone Music's ManyStation, again with a 1.5GB library; and the Yellow Tools Independence instruments. VST Instruments created using Jeff McClintock's SynthEdit engine also currently make you place associated files in the same folder as the main DLL file. You can end up with many gigabytes of data in your C: VST plug-ins folder that you'd prefer to house elsewhere, so here are a couple of ways to slim it down. 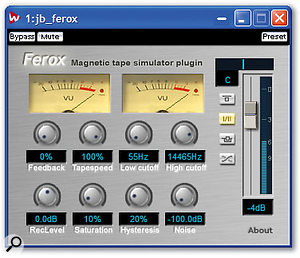 With neat graphics and sophisticated sounds, Jeroen Breebaart's freeware Ferox plug-in offers a full range of tape-modelling effects, including bass and HF 'humps', odd-harmonic generation, saturation and hysteresis. If you want to try adding some analogue tape saturation effects to digital sounds, you could do worse than visiting Jeroen Breebaart's web site (www.jeroenbreebaart.com). Jeroen has plenty of expert knowledge, having worked for seven years as a Senior Scientist with the DSP group at Philips Research, and has developed a very comprehensive VST tape-simulator plug-in in his spare time. Ferox looks good and sounds good, with separate controls to tweak Rec Level, Low gain (bass hump), High gain (HF peak), Saturation (odd harmonic level) and Hysteresis (non-linearity). It even offers variable Noise (although I'd personally leave that set to minimum), plus Tape speed and Feedback controls to simulate vintage tape-echo effects. The presets cover high-quality tape decks, cassette machines, worn-out tape and analogue overload, and Ferox is capable of a versatile range of quality effects, from gentle thickening to total mashing. As far as I'm concerned, this is the king of freeware tape emulations, and gives plenty of commercial ones a run for their money.

The first method is to install the VST Instrument and library to your default VST plug-ins folder, but then manually drag all the larger sample-based files to a more convenient location (you could create a dedicated Samples partition on a different drive for all your libraries). Once they are in place in their new location, select all relevant files, then right-click on the lot and select the 'Create Shortcut' option. A batch of tiny shortcut files will appear with identical names, and you then drag these files over to the original VST plug-ins folder, so that the synth's DLL file will be able to link to the real files.

This method will apparently work with some applications, such as Propellerheads' Reason factory soundbanks, and is also used by some commercial VST Instruments, including Spectrasonics' Atmosphere and Trilogy, to link to their data.

That first approach won't work with SynthEdit-based creations, or various other large VST Instruments, so here's an alternative that's often easier to implement and should work with quite a few VST host applications. It works because many of them let you define multiple 'vstplugins' folders; indeed, some VST Instruments, such as Tascam's GVI, rely on this fact; by default, GVI installs its own DLL file inside a separate Tascam Instruments folder and expects you to inform your sequencer of this additional VST plug-ins path.

First, choose a destination for any larger VSTi installs without their own library destination options, and create a new VST plug-ins folder there. I placed mine on my S:\Samples partition, where I install my other sample libraries, but gave it the name '_vstplugins' (starting with an underscore) so it appears at the top of the list of folders when alphabetically sorted. 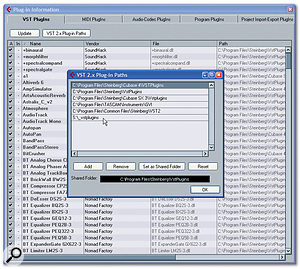 Many sequencers (including Cubase 4, shown here) allow multiple plug-in paths to be defined, so by adding another path, such as S:\_vstplugins, to a convenient location, you can install large VSTi libraries anywhere you wish.Some sequencers, including Ableton Live and Cubase LE, can only recognise one VST plug-ins folder, so this trick won't work for them, but others are more helpful. Here's how to add extra VST plug-ins folders to the list of recognised paths for a selection of popular hosts:

* Steinberg Cubase SX and Nuendo: Launch the Plug-in Information window from the Devices menu and use its Add button.

Once your VST host application has been informed of the extra VST plug-ins folder path, all you need to do is install the entire VST Instrument (DLL file, sample banks, preset files, and so on) in the new VST plug-ins folder and your sequencer will find it all automatically. If you already have bulky VST Instruments stored on your C: partition, you may be able to drag them across to the new destination, but some with serial number or challenge/response copy protection may need un-installing and re-installing in the new folder to register their new locations correctly.

Even so, the migrations aren't likely to require much effort. I've installed VST Instrument libraries in my S:\Samples partition wherever possible, but I still had nearly 3GB of VST Instruments plus sample data that I couldn't do that with, which needed moving. I managed to transfer it into my new VST plug-ins folder in under an hour, reducing the size of my Windows music partition from 8GB to 5GB. The music partition image backup file now compresses to under 3GB, takes just four minutes to create and fits on a single DVD-R disk.

After a major reshuffle and 'data shrink' like this, it's wise to defragment your partition to optimise performance, and you may also want to reduce the partition's size to allow future expansion for other partitions you might have on that drive.