Build Your Own Synth Websites 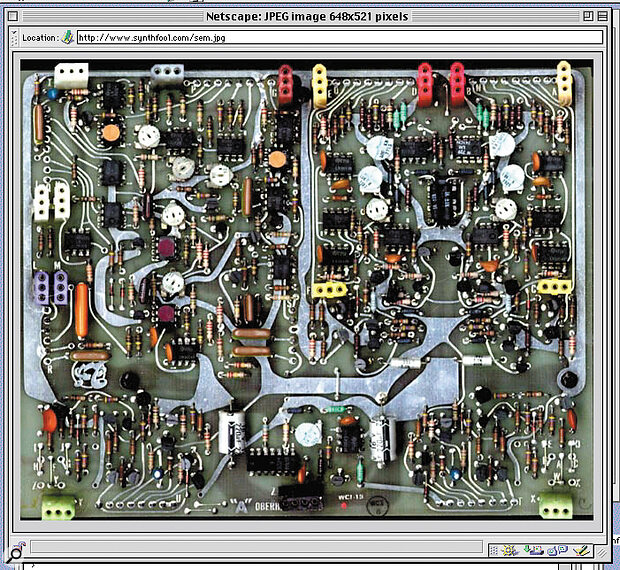 Part of the schematics (below) and a photographic view (above) of the innards of an Oberheim SEM, from the Synth Fool site. Before you get the soldering iron out, it might be worth pointing out that the entire schematic is about ten times this size...

With demand increasing for original analogue synths, and the second‑hand market drying up, more and more people are contemplating building their own. As Ken McBeth explains, all the necessary resources are available online...

As we enter a new millennium, the fondness for all things analogue which has characterised '90s music shows no sign of abating. Second‑hand prices for machines like the illustrious Minimoog, ARP Odyssey, EMS VCS3, Roland System 700, Korg MS‑series, and even the humble EDP Wasp continue to rise. To cope with demand, new analogue synths and 'virtual analogues' are appearing left, right and center. But there is another bunch of synths out there most people haven't heard of at all, and some they never will. These synths belong to an international group of people known as Synth DIYers.

These guys design and build their own synths, taking advantage of the expanding data bank of analogue technology found on the Internet. It is here that the able enthusiast can grab circuits and mix and match designs, creating a unique synth to meet their own requirements. One could, say, take the filter from a Korg MS50, attach it to Moog oscillators, stick in a Polyfusion VCA and finish off with ARP ADSRs... 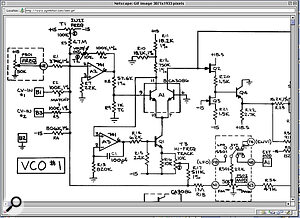 Part of the schematics of an Oberheim SEM, from the Synth Fool site.

Talking of ARP, there are many versions of the ARP M1 filter, and not all sound the same. If you want to know the differences, check out Joachim Verghese's ARP Tech site at www.netcontrol.fi/~jocke/arptech/. He covers in words and schematics the history of the ARP filter, including the original copy of Bob Moog's patented filter found in the 2600 Blue Meanie and Pro Soloist. The M1 is an interesting filter to look at, because ARP used at least three versions throughout their history. At the ARP Tech site, Joachim provides a design for a hybrid dual ARP filter, adapted from the two 'best' designs.

The '70s were the heyday of the analogue synth kit: electronic hobbyist magazines such as Practical Electronics, Wireless World, Electronics Today International and Elektor were at the forefront, publishing designs for the synth builder. To build some of those designs, one needed a firm grasp of electronics and constructing even the smaller models was no picnic. The one I picked on many years ago was the 'scaled down' version of the Practical Electronics Sound Synthesizer, called the 'Minisonic 2', an improved version of the original 'Minisonic'. This was a miniature synth operated from batteries, and aimed at the anal‑retentive schoolboy with no interest in girls or sports. The schoolboy would have had to have some kind of qualification in either physics or maths to complete such a task, and few did!

The Minisonic 2 was a two‑oscillator synth with an EMS‑Synthi‑like filter as well as a VCA, a ring modulator, two envelope generators and a noise generator. Without going into great detail, this thing was plain hell to build: the article describing its construction was too complex, as were the design and implementation. 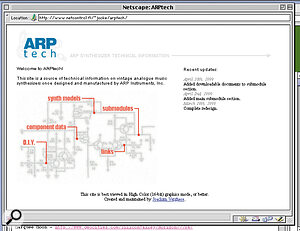 The ARP Tech page provides an exhaustive analysis of the history and design of ARP's celebrated M1 filter.Things really changed when Electronics Today International, in conjunction with a company called Powertran, released the design and a kit of parts for a single‑oscillator synth called the Transcendant 2000. The article (by Tim Orr, formerly of EMS) was well planned, and Powertran provided everything you needed, down to the last nut and bolt, even including a mains plug. It was very popular, and spawned a range of synths including the Transcendant Polysynth, which was the kit‑builder's Jupiter 8 without the memories. You can find schematic diagrams for the Transcendant 2000, along with other classic synths (see below), at the Synth Mirror DIY site, aupe.phys.andrews.edu/diy_archive.

ETI also published, in 1979, schematics for the now‑classic Digisound 80 modular — see this month's SOS Retrozone. This, like the Transcendant Polysynth, featured the ubiquitous Curtis Electro Music synth chips. The CEM chip revolution brought us the Prophet 5, Pro One and Oberheim Matrix synths, and the polyphonic Korgs to name but a few, and also made kit building a much easier proposition. The CEM chips were complete and stable circuits, requiring few extra parts for operation, and they came in quite a variety, including the renowned 3340 VCO, a VCF chip and others such as the Dual Ring Modulator, Dual VCA and Dual ADSR chips. Schematics and information on Curtis chips are available on Synthesis Technology's web site at www.synthtech.com the company also offers CEM chips for sale, including a recently discovered cache of 3340s.

The Norwegian magazine Elektor published the design for the Formant synthesizer which, like the Digisound, was modular and based around Moog Modular styling. The Formant synthesizer schematics can also be seen at the Synth Mirror DIY site. An early ETI design not yet mentioned was the 4600 and its descendants, the 5600 and 3800 synths, which were distributed as kits by Maplin Electronics. The 4600 and the 5600 featured a patch board similar to that of the VCS3, only bigger! At the time, however, these synths yet again proved overly complex for the amateur constructor.

If you are thinking of building a synth, bear in mind that some designs — especially scans from published articles — may be inaccurate or incomplete. The Practical Electronics Analogue Sequencer, for instance, published in April 1977, will not function correctly without the modifications published some months later (Sept 1977, Points Arising): having downloaded the schematics in zip form, once again from the Synth Mirror DIY site, I had to find the back issue in the reference section of my local library! Also, beware of any design where the author explains that they 'haven't built it yet, but it surely must work!' These may have you pulling your hair out!

The best answer to all this is to pick a design from a one‑time commercial product, using a schematic from an original service manual. A good example might be the Moog Rogue, for which two excellent complete schematics are available. The entire schematic may look somewhat complex, but the circuit for the filter is easy to extract as a self‑contained part, and it works! If you are worried about where to get the components, check out Maplin Electronics on the high street or Rapid Electronics via mail order; any high‑street specialist should stock most of the parts for a Moog filter.

If you like the idea of building your own Moog, the service manual for the Moog Modular series can be found at the Synth Mirror DIY site along with those for the Prodigy and the Rogue. The Modular manual is huge and contains all the schematic diagrams and some of the setup and calibration notes, but beware! Although the designs are all there, some of them use parts which may be hard or impossible to get hold of. It also has to be said that some modules, such as the oscillators and envelope generators, were better implemented in later designs such as the second‑series Minimoog, Prodigy and Rogue. Schematics for the latter two are also available at Synth Mirror DIY: they are extremely readable, as are the associated setup notes, and the circuits work! Also at this site is the complete service manual for the ARP Odyssey, apart from the M1 filter block — but, as I've stated, you can find this at ARP Tech. Robert Penfold's book Electronic Synthesizer Construction, which is sadly out of print, also resides at Synth Mirror DIY, and describes the principles, design and construction of a modular synth in easily digestible chunks.

[Readers may also like to check out Barry Klein's book Electronic Music Circuits which describes circuitry involved in modular synth design. It is a good starting point to learn the technology as well as electronics in general.]

Another synth from the past which makes a good construction project today is the Oberheim SEM (Synthesizer Expansion Module). This synth isn't too difficult to knock up, and features a voltage‑controlled state‑variable filter which I can only assume was the inspiration for the filter in Chris Huggett's Wasp. All the parts for this synth can be obtained readily, and if you want to see the circuit diagram, go to the Synth Fool page at www.synthfool.com and look under 'schematics'.

American company PAIA (www.paia.com) have been producing analogue synth kits since 1967, and their web site is well worth a look. If you are after a complete synth to build from a proven design, their 'Fatman' could be it! It's a two‑oscillator sawtooth job, with a good VCF similar to that of the second‑series ARP Odyssey, and it has a MIDI‑to‑CV converter. The schematics are easy to follow and anyone is allowed to build it providing they don't market it as their own — 'fair‑use copying', they call it.

Before embarking on a building project, it's well worth taking a look at some of the instruments put together by other Synth DIYers. You can see Juergen Haible's constructions at Synth Fool under 'Synth DIY'. Here we are treated to his nicely crafted emulation of the AKS, the 'Synthi Clone'. The unique original implementation by EMS of the matrix patchboard design is replicated here — amazingly, they are still made by a Swiss company called Ghielmetti, and available from www.ghielmetti.ch.

Other instruments illustrated on the Synth Fool site include Erik G's EH30, which closely resembles the Korg PS‑series synths; Erik's panel designs are something to marvel at. Another guy called Eric Barbour has even created an 'all tube' synth called the TS10.

By typing phrases like 'vcf diy', 'modular schematic' or even 'transistor ladder' into your chosen web search engine, you open the Pandora's Box of synth DIY mayhem. All sorts of people are bringing to life all kinds of exciting variations on a theme. Over time, more and more synthesizer schematics, both old and new, are hitting the net, and not just in the analogue synthesizer domain: there's a stack of MIDI circuitry out there too. The next time you feel that you'd like something different, find a design that you like and do it! Alternatively, drool on...

Some of my favourite haunts on the net include the following, which are also invaluable to the Synth DIYer...

If you do decide to make your own synth, you will need to invest a small amount on hardware. Don't fret! None of what you need will cost an arm or a leg! You will, first of all, need a soldering iron: I recommend an Antex 25 Watt model. You will also need a pair of 'snips' (small wire‑cutters), a moderately cheap digital voltmeter, and something called Veroboard to build the circuit on. If you can make or have some one make a proper printed circuit board for you, all the better. It's also worth investigating books on electronic components and circuitry, either on the net or down at your local library. Don't forget, of course, that safety must always come first — don't get electrocuted doing something stupid. I recently stripped a wire with my teeth and got a nice LFO square wave bouncing around my tongue because I'd left the power on!