There's no shortage of Apple news this month, including the release of new versions of Logic, a revision to the iBook line and a new, cheaper G5 model.

The flags were flying at half-mast this month when Apple finally assimilated the Emagic brand and most of Emagic's old web site, aside from the support and download pages for existing users. However, these changes coincided with Apple's release of the long-anticipated Logic Pro 7 and Express versions, offering features first demonstrated at Winter NAMM at the very beginning of the year. It's reassuring to see that Emagic are continuing to develop one of the finest sequencers on the market under their new owners.

A Big Mac For Less 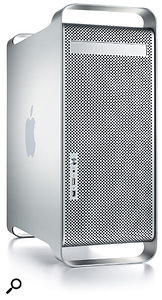 Apple reintroduced a single-processor Power Mac G5 model into their professional line-up this month. At £1099, it's the cheapest Power Mac G5 yet.Possibly the most curious new Mac announcement from Apple this month, which came just as I was finishing this column and the iMac G5 review elsewhere in this issue, was the introduction of a new low-end Power Mac G5 model. Having eliminated all single-processor G5 models in the last revision of the Power Mac line-up, Apple have reintroduced a single-processor 1.8GHz model at the somewhat attractive price of £1099, which, significantly, is exactly the same price as the mid-range iMac featuring the same speed of processor and a built-in 17-inch LCD panel.

The single-processor 1.8GHz model is almost identical to its dual-processor brother (which costs £1449) featuring a 512k cache, but only a 600MHz front-side buss (just like the iMac G5) rather than a 900MHz buss per processor, which is a little curious. Since the specs of the 1.8GHz iMac G5 and single-processor Power Mac G5 are fairly similar, though, I imagine performance would also be pretty similar, as quantified in the iMac G5 review this issue.

This new low-end Power Mac comes with 256MB PC3200 RAM (expandable to 4GB via four DIMM slots, like the dual-1.8GHz, but unlike the higher end models that support 8GB via eight DIMM slots), and Nvdia GeForce FX 5200 Ultra with 64MB DDR SDRAM, DVI and ADC ports. In terms of storage, you get an 80GB SATA drive and a Superdrive, not to mention the ability to install a second SATA drive — which you don't, of course, get with an iMac. Staying with the theme of expansion, as with the dual-1.8GHz model, the single-processor Power Mac offers three 33MHz 64-bit PCI slots, compared to the one 133MHz and two 100MHz PCI slots in the higher-end models.

As discussed in the iMac G5 review elsewhere in the issue, the appearance of a £1099 Power Mac that's better specified (at least in terms of expansion and connectivity) makes this model more suitable than an iMac if you're looking for the cheapest G5 machine for music making, unless the portability and all-in-one form of the iMac appeal to you more.

Possibly the most intriguing new feature of Logic Pro 7 is what Apple term as distributed audio processing, whereby the processing of tracks can be offloaded to other Macs on a network. Logic 7 includes an additional Logic Node application on the installation DVD, which can be freely installed on as many Macs as you like — without requiring additional dongles. This is in contrast to other distributed solutions such as VST System Link, where each machine needs a licensed copy of either Cubase or Nuendo, for example. All you need do to use Logic 's distributed audio processing is buy another Mac equipped with both a G5 processor and Gigabit Ethernet — which gives you a choice of purchasing a Power Mac, or, well, a Power Mac. And this is where Apple's commercial strategy becomes clear.

While Logic is essentially a software-only solution, Apple generate more revenue by selling computers than software, so the strategy, fairly obviously, seems to be to create software that enhances your workflow if you purchase additional Macs. This isn't a bad thing, of course, but it's not so different to buying additional DSP cards to run more plug-ins in a system such as Pro Tools: in the case of Logic, a Mac is now equivalent to a DSP card, albeit a DSP card that could give you a great deal more flexibility in the long term if the true potential of a network-based environment is reached.

It's worth remembering that this isn't the first Apple Pro product to include a networking technology that increases your processing power if you network additional Macs. Shake, Apple's video-compositing software, also includes such a node application. The really interesting point with Shake is that while Apple still develop and support the Linux version, since it had a user base even Apple couldn't turn their back on, each additional render-only machine in your Shake network costs $1499 to license, whereas additional render-only licenses for Macs are completely free and are, in fact, included with the original Shake purchase.

Unfortunately I haven't had the chance to try these new distributed audio processing features, but my copy of Logic 7 did arrive as I was finishing this column, and the manual mentions some interesting caveats that are worth bearing in mind before you order a rack full of Xserves. Firstly — and quite importantly, in my opinion — you can't offload EXS24 instances to Logic nodes. The reason for this is apparently that copying sample data would slow down the network and interfere with distributed audio processing performance, which seems understandable. However, for composers who would love to use EXS24 to replace racks of computers running Gigastudio, this is a bit of shame. Such composers, operating large computer configurations, are crying out for some kind of networked sample-management system where they don't have to worry about which additional computer is playing a given sampled instrument.

Other types of object that can't be offloaded to a node include Multi-channel Instruments, such as the new Ultrabeat plug-in, along with Input, Output, Buss and Aux channels. Another interesting point is that when a track is selected to be played via MIDI Thru, Logic automatically swaps the track to be played on the host, even if it's set to be calculated on a node, to ensure that there's no performance latency. This makes sense also because Logic has to automatically compensate for network delays during playback, and this wouldn't work so well if you were trying to play an offloaded instrument in real time.

All in all, though, Logic 7 's distributed audio processing abilities could significantly change the way we think about the software studio, and I look forward to reporting back once I've had a chance to play with the technology hands on.

Apple's Xserve RAID storage system now supports 400GB drives, offering 5.6TB of data at a cost of just over $2 per GB.In addition to new Mac releases this month, Apple also revised the Xserve RAID storage system with a more attractive pricing structure and the availability of 400GB ATA/100 Apple Drive Modules (ADMs). Some people might be disappointed that Apple have retained the ATA/100 interface for the Apple Drive Modules, compared to the SATA interface used on the Xserve G5, but the striping RAID modes available will at least ensure a reasonable performance for audio and video users.

The three models Apple is offering as standard feature 1TB (four 250GB ADMs), 2.8TB (seven 400GB ADMs) and 5.6TB (14 400GB ADMs) of RAID 0 storage for £4599, £6549 and £9999 respectively. Each model has dual independent RAID controllers with 512MB cache per controller, an 8MB cache for each ADM, and dual 2Gbit Fibre Channel ports. In the high-end model this means that each gigabyte costs $2.32, which, for this type of storage, is actually quite an impressive deal and puts a substantial storage system within the reach of project-level budgets.

The iBook G4 was introduced in October 2003, so it was fitting that Apple revised this particular product on its anniversary, with a host of improvements at a very attractive price point. There are now three models in the iBook G4 family: the low-end model sports a 12-inch screen for £749, while the mid-range and high-end models offer a 14-inch screen for £899 and £1049 respectively. All three models offer the same resolution of 1024 x 768 powered by ATI Mobility Radeon 9200 graphics with 32MB DDR SDRAM and AGP 4X support. 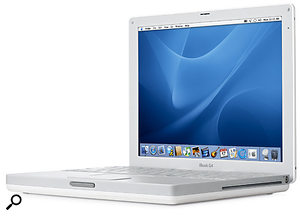 The iBook G4 now starts at just £749 for the 12-inch model with 1.2GHz G4 processor — making it the most affordable G4-based laptop ever.The 12-inch iBook features a 1.2GHz G4 processor with a 512k Level-2 cache and a 133MHz front-side buss, while the 14-inch models offer a 1.33GHz G4 instead. Like the iMac, all iBook models come with 256MB of memory, which is just enough to be useful, and there's one free slot available in which you can put an additional RAM chip of up to 1GB, for a total of 1.25GB. The 12-inch iBook comes with a 30GB ATA/100 4200RPM hard drive, while the 14-inch models each include a 60GB ATA/100 4200RPM. When it comes to optical drives, the lower two models feature a slot-load Combo drive, while the high-end 14-inch model offers a slot-load Superdrive.

Moving onto connectivity, the iBook G4 has two USB 2.0 ports, Firewire 400, 10/100 Ethernet, a 56k modem, a video out port for VGA mirroring, S-Video or composite output, and a headphone mini-jack. One nice touch is that all models feature built-in Airport Extreme, and an internal Bluetooth module is available as a build-to order option. Apple claim the iBook G4's battery will last six hours, which is pretty good, although (as always) this depends on usage and how bright you keep the backlight on the LCD panel.

As a previous owner of a 12-inch iBook, I think it's a little disappointing that the 12-inch model has been relegated to only an entry-level position; I actually chose the 12-inch in preference to the 14-inch model because it was far more compact and offered the same 1024x768 screen resolution. I guess Apple hope that those who want power in a smaller form factor will opt for the 12-inch Powerbook instead, starting at £1149 and offering the same 1.33GHz G4 processor featured in the 14-inch iBook G4.