Steinberg originally introduced the concept of Folder tracks in Cubase VST, as a way of organising the track list in the Arrange window. Here, we look at how this feature became even more powerful in Cubase SX, and how to make the most of it.

Folder tracks are a tremendously useful way of organising the Project window, allowing you to place regular tracks within specially created Folders, to create a hierarchical structure in the Project window's track list — just as you might create folders on computer disks to organise your files. This can be useful for a number of reasons, including cleaning up the track list to make working with large numbers of tracks more manageable, and as an editing tool for working with groups of related tracks.

When a Folder track is selected, a hierarchical overview of the Folder's contents is displayed in the Inspector, allowing you to select a track and see that track's info in the lower part of the Inspector.

While dragging a track into a Folder is essentially a very simple thing to do, there are a couple of quirky rules about how Cubase handles this procedure that are worth bearing in mind. When you drag a track into a Folder, it will always appear at the top of the list of tracks within the Folder, although it is possible to re-order tracks in the Folder by dragging them, in exactly the same way you would normally re-order tracks in the track list. A caveat to this comment is that you can put a track into a specific location in a Folder by dragging it between two tracks that are already there.

If many tracks are selected, you can drag them into a Folder in one go. The added tracks will appear at the top, but in their original order. If you want to create a new track within a Folder, select the track you want the new one to appear beneath and use one of the 'Add Track' commands from the Project or Quick menu. You can't double-click in the track list to create a new track inside a Folder in this situation.

Any type of track can be included in a Folder track, although it's worth pointing out that when you create Group and FX channel tracks Cubase automatically places them in a Folder called 'Group Tracks' or 'FX Channels' respectively, creating the Folder if necessary. This is also true for VST Instrument Output channels and certain types of automation track. Note that in any of these cases, tracks automatically placed inside Folders by Cubase can still be dragged anywhere you like in the track list, including into other Folders.

You'll notice that Folder tracks have similar controls to regular tracks, including Mute, Solo, Record, Monitor and Lock buttons, and using any of these controls affects all the tracks contained within the Folder. For example, pressing the Solo button will activate the Solo button for all the tracks in the Folder, providing a quick way to solo different groups of tracks in your Project. This is particularly useful when you're working with a large number of audio tracks that all need to be record- or monitor-enabled at the same time: place the audio tracks in a Folder and use the Folder's record and monitor enable buttons. Finally, the Folder track's Lock button is also a convenient way of locking the entire contents of a Folder with a single click.

When you have a Folder track selected in the track list, you'll notice that the Inspector displays a hierarchical list to represent the contents of the Folder. One neat thing about this is that you can then select a track in this list in the Inspector, to display the normal Inspector sections for that track.

Once you've been using Folders for a while, it's inevitable that a certain curiosity will arise and you'll wonder if it's possible to drag a Folder track into another Folder track. Fortunately, you can: dragging a Folder into another will move that Folder and all its contents into the other one, with Cubase preserving a hierarchical view in the track list and making it very easy to see how the tracks are organised. But when you're working with sub-folders, bear in mind that any operation you perform on a sub-folder (or a track within a sub-folder) will have consequences for every Folder track above or below that track or Folder in the hierarchy. 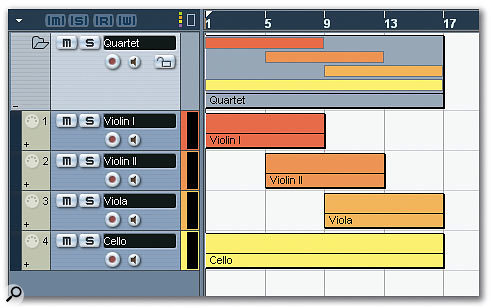 Notice how Folder Parts contain miniature representations of the Parts on the tracks within the Folder. If your Folder Parts appear to be empty, simply increase the vertical height of the Folder track, by dragging the bottom of the track downwards.

Now, say you have another MIDI track in the same Folder and you create another MIDI Part from bars two to eight. The Folder Part on the Folder track stays exactly the same, and if you move the Folder Part around, the Parts on both MIDI tracks stay locked to their relative positions within the Folder. Where things can become a little confusing is where you have overlapping MIDI Parts with a Folder. For example, say you created another MIDI track with a Part from bars five to 13, the Folder track would now contain two eight-bar Folder Parts that overlap. If you moved the first Folder Part (that lasts from bars one to nine), the MIDI Parts on the first two tracks (the ones lasting from bars one to nine and two to eight) would move with it, but the overlapping MIDI Part on the other track, that lasts from bars five to 13, would remain untouched.

A useful way of looking at it would be to consider each Folder Part a container for Parts in its own right, so Parts on tracks within a Folder track are stored in different Folder Parts, which you can always see in the overview of the Folder Part if the track's height is sufficient (see screen above). Since it can become confusing to have different Folder Parts, you may want to merge Folder Parts together, although unfortunately you can't use Cubase 's Glue Tool to do this, as you might expect. Instead, while it seems a little counter-intuitive, where you have overlapping Folder Parts you drag the start point of the later Part a little way back into the earlier Part and when you release the mouse button the Folder Parts are merged.

When you double-click a Folder Part, Cubase will open one or more editor windows. For example, if a Folder contains only MIDI tracks, double-clicking a Folder Part will open all the relevant MIDI Parts in the default MIDI editor, which is normally the Key Editor. Similarly, if you double-click a Folder Part for a Folder containing only audio tracks, and the audio tracks contain only audio Parts, these Parts will be opened in a single instance of the Audio Part editor. Otherwise, if the audio tracks contain audio Events, each Event will be opened in its own Sample editor. If a Folder contains a mixture of audio and MIDI tracks, Cubase will open all the MIDI Parts in a single editor, all the audio Parts in a single editor, and all the audio Events in their own editor windows.

Folder Tracks can be really useful, for example, when you're working with orchestral arrangements, since an orchestra consists of many recognised instrumental groups. You can create Folders for each orchestral family, such as Strings, Brass, Woodwinds, and so on, and place the tracks for each instrument into the appropriate Folder. The best thing about this method is that when you're working with the Score editor you can open the Folder Parts for each instrumental group to see all the staves for the instruments within that folder, without having to make manual selections of multiple Parts all the time. Obviously, this example applies to any arrangement where you have a defined group of instruments, such as a big band arrangement, or a string quartet within a pop song. 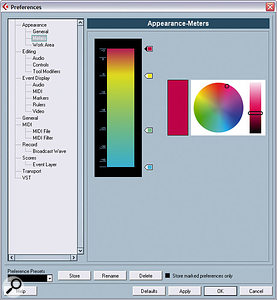 Cubase SX 3.02 includes a new Preferences page, enabling the colours of its level meters to be completely customised. Just as I was finishing this month's column, Steinberg officially released build 622 of Cubase SX as version 3.02. On the new features front, this version of Cubase inherits some of the additional Appearance preferences from Nuendo 3, including the Appearance-Meters page that allows you to configure the colours used for the level metering in the user interface.

The only other entry in the new features list is that the status of the Play Order track is now saved with the Project, and although some might have regarded this a bug-fix, it's still welcome!

On the bug-fix front, issues that could have caused a crash, such as using the Delete Time command, the Generic Remote, Quicktime movies on a Mac with Show Thumbnails enabled, and opening the Drum Editor window after enabling Score drum notation, have been addressed. A full list of fixes and the download itself are available now from www.steinberg.net.