The characteristic 'overshoot' curve that Masterworks EQ's shelf filters can produce when used with a high Q value — much smoother sounding than a conventional shelf.

We explain how to tweak your tracks with MOTU's answer to Sony's Oxford EQ and speed up your workflow with the essential DP keyboard shortcut selection!

Users of Digital Performer who've upgraded to version 4.5 now have at their disposal what I think is one of the best software EQ plug-ins out there: Masterworks EQ. In sonic terms, it bears comparison with the very best offerings in both native (Waves) and 'powered' (TC, Mackie) plug-in formats, but remains extremely flexible and easy to work with. Use it on a track and its presence is often very obvious. It can do 'warm and subtle' as well as 'harsh and edgy', but it doesn't pretend to be phase-accurate, and the resultant 'smearing' gives a reassuringly analogue-style effect that can add warmth, life and fluidity to many sources. If you want phase coherence and ultimate accuracy (for classical or mastering work, for example), you'd be better off looking at something like the Waves LinEQ or the superb and under-rated Periscope, by Audio Ease. But for general multitrack mixing, Masterworks EQ should find plenty of uses.

Fundamentally, MW EQ is a five-band parametric design with additional low-pass and high-pass filters, but each of the seven bands can be enabled individually — in fact, by default the plug-in instantiates with none of the bands enabled — so things can be as simple or complex as you like. Also, there's nothing pre-determined about the frequency ranges on which the five parametric bands work so, in effect, MOTU's 'Low', 'Low Mid', 'Mid', 'High Mid' and 'High' terminology is provided for convenience only. You could, if you wanted, set the 'High' centre frequency at 20Hz! What is set in stone, though, is the way in which only the Low Mid and High Mid bands are capable of being shelving-type filters. The other three main bands are peaking (or 'bell') type only. All in all, it's a very flexible system that provides plenty of open-endedness but retains a link to the 'British large console EQs' that it's apparently modelled on. 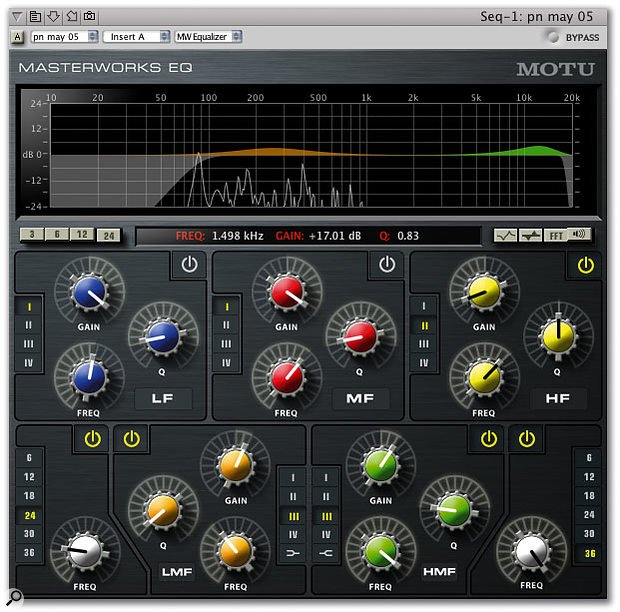 MOTU's new Masterworks EQ in all its glory. Here five bands are enabled, as well as the real-time FFT spectrum-analysis feature.

What really sets Masterworks EQ apart, though, is the selectable filter characteristics for each band. To start with, the low- and high-pass filters are capable of cutting at anything from 6dB to 36dB per octave, and those high-value settings are well into 'surgical' territory. Then, for the other bands, there are four different filter types (plus a shelving option for LM and HM bands). These primarily affect the bandwidth behaviour of the EQ boost (or cut), causing the Q parameter to act in subtly different ways. Here's a run-down of the four filter types:

I: This is the most like DP's long-standing Parametric EQ plug-in. Bandwidth increases as gain increases, so at lower gain settings bandwidth can end up very narrow. For little tweaks here and there this is probably the most 'surgical' mode, and is the most digital-sounding of all the filter types.

II: Here, bandwidth remains virtually unchanged regardless of gain. This type is noticeably 'warmer' than type I but is capable of very narrow boosts and cuts at extreme gain and Q settings, so is particularly good at taming troublesome hums or resonances.

III: Warmer again, bandwidth increasing with gain. At low gain settings, very smooth, broad curves are possible. This type is excellent for dialling in relatively small amounts of boost or cut on individual tracks. It's a contemporary-sounding EQ that's most like the best analogue EQs and other decent digital EQs such as Waves' Renaissance EQ.

IV: This filter type is capable of almost 'table-top' EQ curves and has the very widest bandwidth for any gain or Q setting. It's something of a blunt tool for making corrections to individual tracks but is superb for subtle treatments on sub-mixes or even final mixes.

Even the shelving curves, available on the LM and HM frequency bands, are quite 'grown-up' and analogue-like. The Q control remains active for shelving-type curves and effectively determines the steepness of the start of the shelf 'curve', but high Q settings cause an 'overshoot'. Visually the effect is obvious (see the screen below) and musically the overshoot leads to a smoother result. The final trick up Masterworks EQ 's sleeve is a real-time FFT frequency-analysis display, superimposed on the EQ curve window. I'd like a bit more gain on this display, so that really low-level sounds are as visible as loud ones, but just as with Periscope, it makes zoning in on problem areas that much easier.

With the advent of the Consolidated Window, the whole DP user experience has improved no end. It's undeniable, though, that it's still faster to work with most software using good old keyboard shortcuts. In this regard DP is better than most apps: keystrokes can be set up (or modified) for virtually all commands via the Commands window (Apple-L). But there are literally hundreds of keystrokes already in force by default. Here's a round-up of those I find utterly indispensable:

The vast majority of these are based around the keypad:

You can also turn on Auto-record (punch in/out) by hitting Alt-3. Then define punch-in and punch-out points by locating to the appropriate point in your sequence and hitting F3 and F4 respectively. Similarly, memory-cycle start and stop points are defined by F1 and F2. Those are two shortcuts I couldn't possibly live without!

This is absolutely the best way to quickly move the playback wiper from place to place in a sequence. Hit '.' (the full-stop key on your keypad, otherwise known as 'dot') and you can type in a value for the first part of whatever time format you're using. If it's measures, you'll be typing in a bar number. Hit the dot again and you can enter beats. Hit it once more and you can enter ticks. When you've defined your desired playback position, just hit the Enter key and the wiper moves straight there. The joy of this technique is that as well as being quick, it's also extremely flexible — you don't have to enter all information for any given time format. If you want to locate to bar 36, for instance, no matter where you are already '[dot] 36 [enter]' takes you there.

The keyboard shortcuts for selecting editing windows and tools in DP are amongst the easiest to learn, and using them can massively speed up workflow.

Speaking of time formats, I find myself using Alt-Apple-T a lot to bring up the Time Format window and switch between the formats on offer, especially when moving from time-based to measure-based projects.

These are amongst the easiest shortcuts to learn, and the most useful. Hold down Shift first, and you then get single-key access to all the main DP windows:

Less well known, but a lovely shortcut, is Shift-F. This brings up the window of whichever plug-in is in the uppermost slot (slot A) for any track that is selected. What this means in practice is that you don't even need to have the Mixing Board open to gain access to plug-ins, and since all plug-in windows have both track and insert-slot pop-up menus, it's easy to access any plug-in. This works brilliantly when you're editing virtual instruments in DP: just select something in the Instrument track, hit Shift-F, and there's your instrument.

While we're on the subject of windows, remember that the Mac-standard Apple-W closes any DP window, and an offshoot from this — Shift-Control-Apple-W — closes all plug-in windows. Plug-ins' graphic interfaces, particularly if they're animated in any way, can consume precious processor power, so this one is worth learning.

Also easy to learn, the keyboard shortcuts for DP 's editing tools beat using the mouse and Tools palette any day. They're all genuine single keystrokes (no modifier keys at all) and have a 'momentary' action, so when you let go of them you should revert to whatever tool you last selected with the mouse in the Tools palette, which most often is the 'arrow' or 'pointer' tool.

Perhaps most useful is the use of the Alt key for duplicating data, although how this applies to different types of data is a touch inconsistent. If you want to duplicate some MIDI data, such as notes, pitch -bend or controllers, you can simply select it, then point at the data while holding down the Alt key, and drag. For soundbites, you can additionally start dragging first and then hold down the Alt key. It is possible to hold down Alt first, but you must then drag the 'body' of the soundbite, not its title bar. Fortunately, automation data isn't picky at all about the use of the Alt key!

The Control key has two uses. First, you use it for 'throwing' soundbites, either against other soundbites or to the beginning of the sequence. Just select the soundbite (or soundbites), hold down Control, drag in the direction you want to throw, and let go. When a soundbite is not selected, holding down Control and dragging on the soundbite lets you make a time-range selection, even across multiple soundbites.

The Apple key has only one main use, but it's a very important one. During any editing action — moving, duplicating or selecting — holding down the Apple key toggles the current state of the edit grid on or off. So if you're doing an edit and everything's snapping to grid and you wish it wasn't, just hold down the Apple key and un-snappy dragging behaviour is restored. The opposite of this situation holds just as true.

Don't overlook the humble Shift key, either. Using Shift, you can add to a current selection, whether that's data, tracks, soundbites or any other kind of selection. By its nature this shortcut is 'non-contiguous' — so if you Shift-select events in a list, say, that are not next to each other, you don't select all the ones between the selected ones too. However, you can also de-select, or remove from a selection, using Shift. If you've ever used the scissors tool to cut up a selected soundbite you'll know that all the resultant soundbites become selected too. When you want to then move just one of them, you can hold down Shift, click around to de-select all the unwanted ones, and drag the remaining one, all in one action. This makes more sense when you try it!

Alt-spacebar plays whatever is selected in your sequence: superb when you're working with audio, so that you don't have to keep messing around with the playback wiper.

Apple-/ (forward slash) clears all clipping indicators — in the Mixing Board, Sequence Editor, plug-in windows and Performance Monitor window, amongst others.