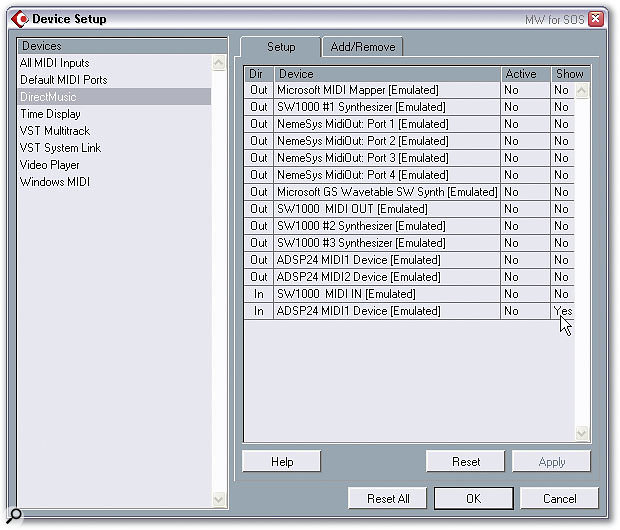 If you find any emulated DirectMusic MIDI drivers in the Cubase SX list, click on their Show columns to remove them from the list of available devices, and then they won't appear as I/O options in the Inspector.

Could your undesirably high MIDI latency in Cubase SX be the result of unwittingly using an 'emulated' driver? Read on to find out.

This month I want to start by talking a little about the subject of Cubase SX emulated MIDI drivers Judging by the SOS web site Forum, there still seems to be a lot of confusion on this topic. I must admit I was initially caught out and was unaware that I was using emulated drivers with my Midisport 8x8 interface — which is why the latency results I reported in SOS October 2002 were so disappointing. Using my specially modified MIDI cable, I measured MIDI latency values that varied between 8ms and 8.9ms with the emulated drivers, but once I'd selected the correct drivers this dropped to 3.7-3.8ms — not only under half the previous values, but also a far smaller jitter range. Other musicians have reported much higher latencies, but the problem nearly always seems to be due to the use of emulated drivers.

The reason for multiple MIDI driver entries appearing when you go to select a driver is that there are three possible driver models — the older kernel mode (used as far back as Windows NT 4.0), the WDM driver, and the new WDM Streaming Model driver, otherwise known as real DirectMusic. The driver developers for your MIDI interface will determine which format is supported, and thus which options will appear.

Steinberg were keen to support real DM drivers for their Midex interfaces to take advantage of the improved MIDI timing that comes from locking it to the soundcard's clock, so Cubase SX requests this capability, using the DirectMusic component of DirectX 8 or higher (Win XP ships with 8.1). In the absence of available true drivers, however, emulated DirectMusic MIDI drivers appear inside Cubase SX, just as many soundcards get emulated DirectSound drivers with lacklustre performance if the developers haven't written proper versions.

Since any software-emulated drivers will always provide poorer performance than true hardware drivers, Steinberg incorporated a filter from SX 1.02 to stop them ever appearing as possible options. Unfortunately, some MIDI drivers seem to get incorrectly reported by Win XP, and the result is that with a few interfaces the real drivers end up being filtered out, leaving only the emulated ones as options.

This problem (which, among other interfaces, occurs with M Audio's Midisport 8x8 and MOTU's MIDI Timepiece AV) can be solved either with updated drivers, or by bypassing Steinberg's filtering altogether. To do the latter, find the supplied Cubase SX file named 'ignoreportfilter', drop it into the main Cubase SX application folder, then restart the application.

As a postscript, during my researches I came across several musicians who claimed that returning to the emulated MIDI ports cured some long-term drifting. However, once again my suspicion is that their interface drivers are being misinterpreted by Windows, such that the emulated and real driver entries are somehow swapped. Personally, I'm glad I could test out the performance of mine, as described in SOS September/October 2002, to prove that I ended up choosing the best MIDI driver option, but my general advice is to avoid any audio or MIDI drivers that claim to be emulated. By the way, it's important to choose just one of the available MIDI driver types, since otherwise they will all accept incoming MIDI data, leading to flange-like doubled (or trebled) notes if you use the 'All MIDI Inputs' option.

Network support has been improved, so you can save and restore backup images from a network drive to save space on local drives, but for me the most useful improvement is Virtual Volume Imaging, which mounts backup images as virtual drives with their own drive letters. You can thus use Windows Explorer to view their contents and restore individual files and folders. With a UK RRP of just £39.99, (updates to registered users cost £29.99), I expect this to sell well.

It seems that Microsoft's release of DirectX 9.0 last December is still causing a few hiccups in the rarefied world of the PC musician. The problem is that system changes as complex as DirectX updates tend to be far more difficult to remove than they are to install. So, while some people advocate having the latest version of everything installed on their PC, I side with those who wait and see what ramifications there are before taking the plunge. Then I do so only if it offers some positive advantage to my particular setup, and only after taking the precaution of saving a pre-install image of my Windows partition. Consequently, my PC is still running DirectX version 8.1, which was shipped with Windows XP. 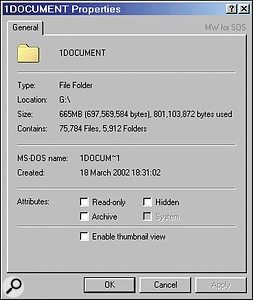 Right-click on a folder and select Properties. The Size parameter will display both the size of your files, and how much space they are occupying on your hard drive.So what advantages does DX9 provide? Well, Microsoft state that when it's coupled with a DX9-compatible graphic card and driver, you may see a visual improvement in games that were designed with DX9 in mind (pixel and vertex shading is involved, for those who are interested in such things), and that enhancements to DirectPlay also provide improvements with multi-player games. So I think we can assume that until music applications use 3D graphics, real-time anti-aliasing, and anistropic filtering (for quadrilateral-shaped and angled areas of a texture image), it's largely irrelevant for us.

If you're in the habit of installing the latest games and demos, DX9 may be automatically installed as an option during the process, but you're still unlikely to see any improvements unless you buy one of the latest DX9-compatible graphics cards, such as ATI's Radeon 9500 and 9700 models. However, even in those circumstances some people have experienced stuttering and instability with early DX9 graphic drivers, so (as always) it pays to download the very latest versions.

DX9 itself can be installed with Win 98, 98SE, ME, 2000 Professional and Server, and XP Home and Professional, and is claimed to be fully backwards compatible, so that all existing applications should work with it. Microsoft also recommend you ensure that you have the latest versions of your audio and video drivers, to take advantage of the latest DX enhancements. Doing this should resolve any problems occurring after DX9 installation too, although this does assume that soundcard manufacturers are using the same version for their driver development.

When you've fully installed Windows XP, ignore the offer to activate it if the previous activation isn't detected. Then restart your PC and use the F8 key to launch the Advanced Boot Options menu. Select the Minimal Safe Mode, and find the 'wpa.dbl' file in the new Windows / System32 folder. Rename this to something like 'wpa.new', and then drag the previous version from your floppy into the same folder and reboot your PC. XP should now be reactivated.

DX9 For The PC Musician

One specific problem for musicians is with Cakewalk's current installer, which apparently insists that 'You must install DirectX 8 to proceed' if you've already upgraded to version 9. Thankfully, it's only the installer that has this problem, so if you've already got Cakewalk's Sonar installed, DirectX 9.0 will work fine with it. In any event, Cakewalk have released a utility that you can run from your desktop to bypass the CD installer. You can download this from www.cakewalk.com/Support/DirectXUtility.exe.

I've also come across people having problems after installing DX9 with Windows Messenger and XP's built-in Firewall. You can avoid such problems with the latter by disabling it and using the freeware ZoneAlarm instead. However, Cubase users don't seem to have had any problems, and Steinberg have discovered that apart from its new features, DX9 also incorporates some bug fixes for SysEx handling with older MIDI interface drivers. They recommend installing it if you have any 'emulated' entries in the DirectMusic MIDI device setup list. This brings us neatly back to the previous topic, and demonstrates once again just how complicated driver problems can be.