An example of how you might use the Timewarp tool to create a tempo map when working with video and identifying hitpoints with Markers.

It's just a jump to the left, and then a step to the right. With your hands on your hips, you bring your knees in tight. But it's the pelvic thrust that really drives you insane. Let's do the time-warp again...

I think it's probably safe to say that this could be the first column in the history of SOS to use lyrics from The Rocky Horror Picture Show as an introduction, but given that Steinberg chose to name a tool in SX 2 as the Timewarp tool — the subject of this column, incidentally—­ what's a writer to do?

The Timewarp tool was Steinberg's reaction to the complaints made by users after the original release of Cubase SX, which had very few features for manipulating tempo. In the 'classic' Cubase, tempo-manipulation features had matured over the years, and the graphical Mastertrack editor contained many facilities for musicians working with film, or users who needed to build a tempo map around a MIDI or audio recording. Aside from the Tap Tempo feature of the Beat Calculator in SX 1, there really was no way to get around the absence of the old Mastertrack, where you could identify time and meter hits, link the two together, and have Cubase automatically work out the tempo changes that would make the two points line up.

Fortunately, however, from Cubase SX 2 (and Nuendo 2.1) users have the Timewarp tool, which is a completely new way of looking at the problem of creating tempo maps. Actually, if you've ever used Opcode's old Vision sequencer, you might notice something familiar about the Timewarp tool; but on the whole, it provides a much easier way of building tempo maps than the old Mastertrack editor.

This two-bar audio loop that's been imported into the Project window is clearly at a different tempo than the Project.

The basic principle of the Timewarp tool is that it allows you to drag musically-relevant locations in bars and beats to linear time locations. For this reason, you need to have Bars and Beats selected as your Primary Display Format for it to work (Cubase will prompt you if you don't), and you also need to be using the Tempo Track (again, Cubase will prompt you if you're not).

When the Timewarp tool is selected, you'll notice the Ruler turns a maroon colour and Tempo Events are displayed in yellow across the Ruler, which is visually rather helpful. These Tempo Events can be moved in time by simply dragging them with the mouse, and if you do this you'll notice that the actual tempo value of the Event is adjusted so that future Events stay locked to their linear time locations. If you want to move a Tempo Event without its tempo value changing, so that future Events move forwards or backwards in linear time, simply hold down Alt/Option while dragging the Tempo Event in the Ruler. Tempo Events can be deleted by Shift-clicking them in the Ruler.

There are two modes of operation for the Timewarp tool, which can be selected by toggling the Key Command for the Timewarp tool, or clicking and holding on the Timewarp icon on the toolbar and choosing one of the two modes from the pop-up menu. The first, default mode is Warp Grid, and when you use the Timewarp tool in this mode, all Tracks are switched to a linear timebase so that, as the tempo changes, although the events lose their musical positions, the precise time at which the Events are played is preserved. The second mode, Warp Grid (musical events follow) has the opposite result: musical times are preserved, while the time at which the Events occur changes.

Back To The Process 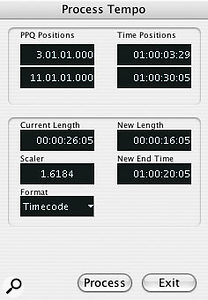 Back from the grave, the Process command in the latest revision of Nuendo enables you to manipulate multiple Tempo Events with a few numbers and a single mouse-click. Although it's not in Cubase at the time of writing, at the request of well-known and technologically-astute German film composer, Hans Zimmer, Steinberg have re-implemented a version of the Cubase VST-style Process command (which used to reside in the Do menu of the Mastertrack editor) in the latest version of Nuendo. While Process isn't quite as visually interesting as the Timewarp tool, it provides a quick and efficient way of dealing with multiple tempo events in one command.

Taking film as an example, say you've written a piece of music that lasts a minute and is structurally perfect, but now the picture gets re-cut slightly so that the piece needs to last 55 seconds instead. Your music contains Tempo Events, and rather than rewriting or editing the music, you want to simply compress it, while keeping the shape of the existing Tempo Events, to make the music fit the new length of picture. The way to do this is to scale the tempo of the Project and all the Tempo Events it contains proportionally, but doing this manually, one Tempo Event at a time, would be fiddly, to say the least. So instead, there's the new (or old, depending on how you look at it) Process feature.

Using Process is fairly straightforward. Open the Tempo Track Editor (Project / Tempo Track, Apple/Control-T, or Apple/Control-click the Tempo button on the Transport Panel), select the Tempo Event you want to adjust and choose Edit / Process Tempo. Note that you won't be able to open this window if no Tempo Events are selected. The upper four boxes show the start and end times of your selection in musical (PPQ) and linear time, and it's possible to adjust the selection range from these fields. The end point should be the musical point that you want to match to a new time location.

In the lower part of the window, Current Length shows the length of the selection in the selected Format (this will normally be Timecode), and you type in the new time location you want to hit in the New End Time field. This will automatically work out a new length and a suitable Scalar value (to scale the Tempo Events by). When you hit Process, the selected Tempo Events will be adjusted so that the end selection point specified in the upper part of the window matches the New End Time in the lower part.

When you use the Timewarp tool in the Sample editor, only the default Warp Grid mode is available, since you obviously can't adjust the length and positioning of audio data without using an additional timestretch algorithm.

One very useful function of the Timewarp tool is when building tempo maps for working with film. The trick is to create a Marker Track on the Project window and place Markers at the locations of various hit-points — timecode positions you want to hit with a musically relevant structure. The Marker Track should be set to linear time mode (so that the button that toggles timebase between musical and linear on the Marker Track shows as a clock), which means that the position of the Markers will stay associated with linear time positions when Project tempo changes.

Markers should be created at timecode positions, so you might want to toggle the Primary Display Format to Timecode or, alternatively, use the Project Browser with its internal Time Format set to display Event positions in timecode. Once you've identified the necessary hit-points in the video and created the appropriate Markers, you can use the Timewarp tool to drag bars and beats onto the hitpoint positions to build your tempo map, using the process described earlier, making sure that Snap is set to 'Events'.