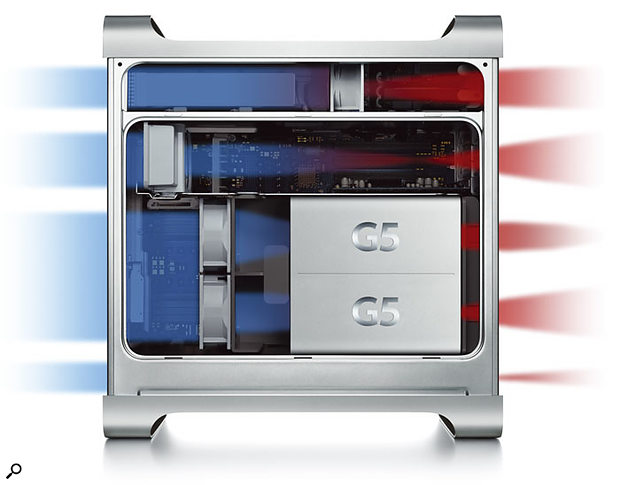 The new high-end Power Mac uses liquid cooling for the 2.5GHz G5 processors, whereby heat is transferred to a thermally conductive liquid, which is then cooled by a fan, before repeating the life-cycle again.

Apple finally announced faster Power Mac G5 models this month, along with a new wireless music technology for use with iTunes and the long-awaited opening of the iTunes Music Store in the UK.

After much discussion, rumours and the beating of a few jungle drums, Apple finally unveiled a new, faster Power Mac G5 product line this month. The announcement came a couple of weeks ahead of the much-anticipated Apple developer conference, and was quietly slipped on to the company's web site — in sharp contrast to the original G5 introduction one year ago. Although 3GHz models were originally promised for this time last year by Apple CEO Steve Jobs, the company have commented on how the challenge of achieving this speed increase with newer chip technology was somewhat underestimated at the time.

So while Apple didn't quite hit the 3GHz mark the company was hoping for, the new G5 systems are faster. The most significant change is the use of dual 2.5GHz G5 processors in the high-end Power Mac configuration, with the lower models now featuring dual-2GHz and dual 1.8GHz processors. This obviously means that there's no longer a single-processor Power Mac in the Apple line-up, which is a very good thing, since the most significant performance improvements when using G5 processors were always seen in dual-processor models.

The new high-end dual-2.5GHz Power Mac G5 makes use of a liquid cooling technology to keep the processors running at an optimum temperature, marking the first time Apple have used such a method. The use of liquid is interesting because it implies that these new, faster G5 processors require substantial cooling — using a thermally conductive liquid is a more efficient way of transferring the heat away from the processor than regular heatsink and fan combinations. The big advantage of this method to musicians is that it's a great way of dealing with extra heat without adding extra fan noise to the system. Apple have some details on their web site (www.apple.com/powermac/design.html), including a QuickTime movie, for those who are interested in finding out more.

As in previous G5 Power Mac models, the front-side buss (FSB) runs at half the speed of the processor, meaning that the dual-2.5GHz model features two independent 1.25GHz FSBs — for each processor. To illustrate performance for musicians, Apple created a song in Logic 6.4.1 with multiple unique audio tracks, each running five instances of a reverb plug-in. The results were that the dual 2.5GHz, 2GHz and 1.8GHz systems managed 180, 159, and 144 plug-ins respectively, playing (I'm deducing) 36, 31 and 28 audio tracks simultaneously.

This is a personal observation, but Apple's figures don't really mean anything to me, most notably because so little information is given about the actual conditions of the test. For example, what were the buffer sizes on all systems (or audio cards, for that matter)? Were the tracks mono or stereo? What was the resolution and sampling rate? And what reverb plug-ins were being tested? Also, when I tested the dual-2GHz G5 in February's Apple Notes, running 120 stereo Platinumverbs in Logic pushed the system to the limit, playing back just two low-resource software instruments and no audio tracks. Compare this figure to Apple's 159 reverb plug-ins for the 2GHz model and it won't take too long to realise why I'm sceptical of the value of these tests.

Aside from the fast processors, FSB and new cooling in the high-end model, the architecture and feature-set of the Power Mac G5 remain the same, with the low-end dual 1.8GHz offering three 33MHz 64-bit PCI slots, and the 2GHz and 2.5GHz models still providing only three 64-bit PCI-X slots (one running at 133MHz and two at 100MHz). In terms of graphics hardware, the 1.8 and 2GHz models both include an Nvidia GeForce FX5200 Ultra card with 64MB memory, while the 2.5GHz model has an ATI Radeon 9600XT card with 128MB memory. You can also choose an ATI Radeon 9800XT card with 128MB memory in the build-to-order models, such as those available from the Apple Store.

An interesting (albeit unfortunate) side-effect of choosing the high-end ATI Radeon 9800XT graphics card when ordering your G5 is that the heat-sink on this card ends up blocking one of the PCI/-X slots — d'oh! It's probably a good job, then, that Digidesign have just announced a 64-bit expansion chassis with seven 64-bit/33MHz slots, designed and built by Magma — see www.digidesign.com/news/details.cfm?story_id=1159 for more information.

The pricing structure of the Power Mac G5 range remains the same, with the 1.8GHz model costing £1449, the 2GHz model £1849, and the 2.5GHz model £2199. The dual 2.5GHz Power Mac should be available in July according to Apple, although many users are already reporting later delivery dates for pre-orders. Hopefully we'll be able to get our hands on a unit soon to report back first-hand on the improved performance.

The Air That We Hear

The day before Apple announced faster G5s, they unveiled a new wireless base-station dubbed Airport Express. Resembling one of Apple's laptop power supplies in size and appearance, this new, very portable base station offers most of the features of Airport Extreme, including an Ethernet port and a USB port for printer sharing. Airport Express supports 10 simultaneous users (as opposed to the 50 users of Airport Extreme), although it offers the same theoretical range: 50 feet for 802.11g devices or 150 feet for backwardly-compatible 802.11b (the original Airport) machines. The Express appendage refers to Apple's marketing hook — that this is a great product to put in your laptop bag if you travel a great deal, and I could certainly see myself purchasing one for this purpose. 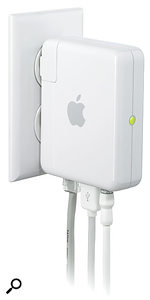 Not to be confused with an air freshener, this is what Apple's Airport Express looks like — at least, if you live in America.However, the size of Airport Express isn't what makes it really interesting. The really interesting feature is that the base station also features a line-out mini-jack connection, enabling you to plug the unit into your stereo system as well and stream music to it from your Mac. While other companies have been experimenting with this concept for over a year now, Apple have taken the idea and made the whole procedure pretty seamless for any user of the company's iTunes software, with a feature dubbed 'Airtunes'. Technically, the idea is pretty simple: send a stream of digital audio data over the network to the base station, and add a digital-to-analogue converter to decode this information for an analogue input on your playback device. Wireless speakers, if you will.

Playing uncompressed audio requires a fair amount of bandwidth, of course, and this is obviously a somewhat precious commodity when one is dealing with wireless networks: 802.11b and 802.11g offer 11Mbit/s and 54Mbit/s respectively. Uncompressed CD-quality audio requires 1411.2kbit/s (plus the actual protocol overhead to send the data across the network). So to prevent Airtunes from completely saturating your Airport Express' bandwidth, Apple employ a lossless compression technique to reduce the amount of data required to actually transmit the audio data to the base station. Presumably this is based on the same technology as the lossless encoding available in iTunes 4.5 (as reported in last month's Apple Notes), which halves the amount of bandwidth required. Apple claim to have encrypted the music transmission as well, to keep the record companies happy.

Airtunes is available in iTunes 4.6 and will automatically detect Airport Express base stations, allowing you to choose which one you want to use as your audio playback device. So there's nothing to stop you purchasing multiple units for all the hi-fi systems in your house — something I'm sure Apple wouldn't object to!

While I haven't had a chance yet to play with Airport Express, it seems that using the wireless music-playback feature set is limited to Airtunes at the moment, meaning that you couldn't use the base station as a regular Core Audio playback device. Obviously I can't confirm this yet, but it would make sense, since the latency introduced by encoding the data and streaming it reliably across a wireless network (can anyone say buffering?!) would make it unsuitable for anything requiring time-dependent playback. However, it'll be interesting to see how Apple develop the technology in future.

Just before I finished this month's column, Apple held a special event in London where, as was widely anticipated, the company introduced the iTunes Music Store to the UK, German and French markets. At a cost of 79p (in the UK) and 0.99 euros (in France and Germany) per song, the pricing is marginally more expensive than the 99-cents-per-song US version, with a typical album costing £7.99 here (9.99 euros in France and Germany), compared to $9.99 in the US. Apple hope to make the iTunes Music Store available to the rest of Europe by the end of the year.

In other news this month, Granted Software (www.grantedsw.com) released Rax, an update to the previous Audio Units host application available from the company, featuring a 16-channel mixer with insert effects and eight send-effect controls, the ability to process live audio, and extensive MIDI features for running Audio Units plug-ins that implement virtual instruments. Rax is ideal for running all your instruments and effects on a stand-alone computer, for live use, or where you want a second Mac to add to your arsenal of virtual effects and instruments. You can download a demo from the web site or register the full version for just $29.95. We'll come back to this neat utility in a future Apple Notes column.