While processing 100s of channels with effects in real time has increasingly become the norm for most of us, there are still occasions when not processing audio in real time can be useful. We look at how to achieve this in Cubase SX.

In the days of old, studio engineers would usually 'print' effects to tape, meaning that they would record the output of an effects unit on to a new track to free up a particular effects unit for other tasks. These days, one of the advantages of software effects is that you can run many copies of the same effects processor simultaneously, so you don't have to 'print' an effect before you start experimenting with the same effect on another track.

You can process any event in the Project window in real time, with any plug-in you would normally use, by selecting the event and choosing the appropriate effect via the Plug-in sub-menu of the Quick menu, as seen here.

However, while computer studios aren't limited by the number of effects that can be used, in most situations they are still limited by the power of the computer, which can only cope with a finite number of real-time effects. Although most modern systems can handle a fairly staggering number of effects, it's still useful to know how to 'print' effects with Cubase, especially if you're working on larger projects, for example. It's inevitable that the time will come when you'll need every bit of power your computer can summon.

The 'Freeze' function, wherein the output of a plug-in (such as a VST instrument) is bounced to an audio file was, of course, implemented in modern software to provide a simple way of freeing up processing power — but that feature is actually a discussion for another column. This column is about the powerful off-line processing functionality of Cubase SX ­ off-line as opposed to on-line, which would be real-time. Off-line processing can actually be more useful than on-line processing in a number of situations, both creatively and functionally, such as when working with plug-ins that use large buffers for longer look-ahead times (for example, many noise reduction and mastering tools).

To apply an effect to an audio event in the Project window, select the event and choose the required effect from the Audio/Plug-ins sub-menu. Alternatively, you could right-click the event and select the effect from the Quick menu's Plug-In sub-menu. Change effect settings as required. To audition what you're doing, click the Preview button. Preview mode works in real time while you tweak the parameters. If you want to simply process the audio, click the Process button. To gain more advanced control over the way the effect will be applied to the audio, click the More button. 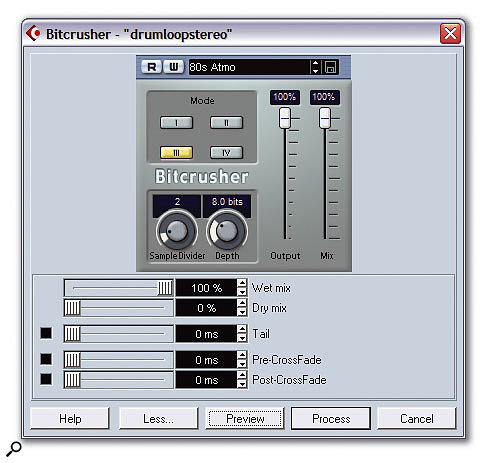 The plug-in process window allows full control over how an effect is applied to an audio clip, especially when you click the 'More' button to reveal additional parameters, as I did for this example.

The Wet and Dry mix controls that are revealed when you click 'More' are inversely linked, so that the amount of dry signal increases proportionally as you reduce the amount of wet signal. Dragging one of these faders to 50 percent, for example, means that the processed result will contain equal amounts of the original and processed signal (the best way to understand the effect of these faders is to have the Preview button activated while dragging them). You can drag the Wet slider independently of the Dry slider (and vice-versa) by holding down the Alt/Option key. However, this destroys the wet and dry balance and means you could distort the audio, since it's now possible to have more than 100 percent of the signal playing back — an option best used with care! The moment you click the Wet or Dry fader without the Alt/Options key, the faders snap back to their original, balanced link.

Activating the Pre- and Post-Crossfade sliders can produce some interesting effects, as they allow you to crossfade between dry and wet versions of the audio over a period of time, at both the start and end of the audio you're processing. The maximum wet value for the crossfade will, incidentally, be the balance you've set with the Wet and Dry mix faders.

The final slider is for adding a 'Tail'. Normally, the processed version of the audio is exactly the same length as the original, which in most cases is just what you want. However, if you're processing a section of audio with an effect that continues to die away after the normal length of the section, such as a reverb or delay, the processed result may end too abruptly. For this reason, the Tail slider allows you to add up to an extra 10 seconds to the end of the audio you're processing, which should be enough for even those vast reverb settings. Simply activate the Tail slider and set the time. You can use the Preview button to check and adjust the Tail setting, as the result is included in the Preview. Clicking 'Less' hides the extended settings again, although any changes you've made will remain active when you click Process.

If you happen to have selected an audio event that's used more than once in the Project window, Cubase will display an alert to ask you if you want to process the clip used by all the events, or create a new clip-and-event pair. If you choose the former, by clicking 'Continue', all the instances of that clip and event in the Project window will also feature the processing you've applied. If you click 'New Version' instead, only the selected event will feature the processing, as Cubase will create a new version of the clip and use it exclusively for the event you selected.

If you've already set up insert effects on an audio track and want to 'print' them using the method described at the end of the main text, first bypass the insert effects on the audio track and open the editor for the first insert effect. If you've used the effect's built-in Programs without any additional editing, make a mental note of which Program you've used; otherwise, if you've performed some editing on a Program, you'll need to save a copy of it to disk, using the Store Preset function in the plug-in's toolbar.

Close the effect's editor window, select the audio event you want to apply the effect to in the Project window, then choose the same plug-in you used in the first insert slot from the Plug-ins sub-menu in either the audio menu or the Quick menu. Set the plug-in's parameters to exactly the same values as they were when the plug-in was used as an insert. Click the Preview button to make sure you're happy with the sound and click Process when you're happy. After you've finished, you can either leave the insert effects bypassed (which uses only a tiny amount of memory, but no processing) or remove them altogether.

One of the most useful audio-related features in Cubase is the Off-line Process History, which literally provides a history for all off-line processing and allows you to remove or alter any of it at any point. Unlike the multiple undo functionality in Cubase, the Offline Process History is always available, even after you've reloaded your song the next day, month, year or century — depending on whether you can still find a computer that can run Cubase, of course!

To open the Off-line Process History for a given audio clip, select the audio event in the Project window for a particular clip, or select the clip directly in the Pool, and open the Off-line Process History window (Audio / Off-line Process History). The History displays a list of all the off-line processes, in the order in which you carried them out. If the Status column is clear, you can select any process you like and remove it from the audio clip by clicking the Remove button. Pretty neat. However, the really clever thing is that if you remove a process that's in between two other processes, Cubase will re-process the clip so that any processes following the process you removed are carried out again.

The Off-line Process History allows you to change any of the usually destructive processing applied to an audio clip at any time, even after you save and re-load a Project.

There is, however, one drawback when you remove processing with the Off-line Process History, because the remove operation cannot be undone — it's impossible to retrieve the processing you remove without carrying it out again as before, manually. For example, say you have a clip processed by plug-ins A, B and C, in that order, and you removed plug-in B's processing; if you decided you wanted plug-in B back again in the same place, you'd have to remove the processing from plug-in C as well and re-do both plug-in B and C's processes again in the original order.

You might have noticed that, in addition to the Remove button, there are also Modify and Replace By buttons in the Offline Process History window, which do exactly what you'd expect. If you select a process and click Modify, the off-line effect's editor window will appear with the exact setting you originally used to process the audio. You can make adjustments (although, unfortunately, you can't use the Preview function this time) and click Process to make the alterations. Again, any subsequent processes will be redone automatically to reflect the changes made.

If you'd like to replace one process with another, simply select the process you want to replace and choose a different one from the pop-up menu underneath the Replace By button. Now click 'Replace By' and process the audio as usual.

Tip: Using The Pool To Apply Effects To Clips

If you want to process a complete audio clip so that every audio event playing that clip plays the processed version, it can often be easier to simply process the clip directly, rather than selecting an Event (or many Events) in the Project window.

To process a clip in the Pool, open the Pool by selecting Project / Pool, or pressing Control/Apple-P, and select the clip you want to process. Choose the required plug-in from either the Audio / Plug-ins sub-menu or by right-clicking the clip to select the effect from the Quick menu. Process the clip as described in the main text of this article.