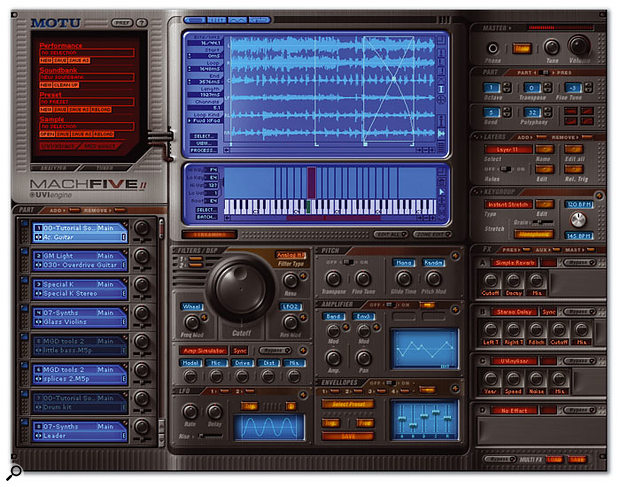 Mach Five Mk II: MOTU have made multiple enhancements to the new version of their soft sampler.

MOTU hinted at even more additions to DP during January 2005's NAMM show. We get a sneak preview, as well as exploring the program's Tempo Analysis powers.

MOTU aren't known for announcing new product features until they're good and ready for release, but at the recent winter NAMM show they gave us a tantalising glimpse of some things that are due 'later this year'. No DP version numbers, specific time scales or upgrade costs were promised, and some of the features still seemed a bit 'alpha', but there were some fascinating things on show.

Most surprising, I thought, was a pitch-detection function very much along the lines of Celemony's Melodyne. This non-destructive function initially just detects pitch (the current main note, plus much finer nuances) and displays it in the form of a 'piano roll' and an accompanying thin black line overlaid on soundbites in the Sequence Editor, very much in the way that automation is already displayed. MOTU did, in fact, refer to the new feature as a kind of 'pitch automation', and it would certainly seem to offer a similar degree of flexibility — if you draw new notes or reshape the line, the pitch changes are rendered in real-time during playback, and your original audio is only altered if you choose to 'print' the pitch corrections to disk. The approach is rather like Auto Tune 's graphical mode, but integrated with DP's other audio editing and mix automation functions at a fundamental level, and as such should offer an unprecedented degree of control over the pitch and tuning of any monophonic audio in your sequence.

Then there's the slightly quirky Pattern Gate plug-in. The user interface is MOTU at its new-age best, all black and red with plenty of photo-realistic curvy bits, but the functionality is right out of Pluggo, with a 16-step sequencer triggering the opening and closing of what looks like a flexible gate. Rhythmic gating is certainly a trendy effect, and this new plug-in should allow more subtlety than has previously been possible through simply chopping up soundbites and deleting or muting the resulting slices.

An additional thing spotted at one point in the NAMM demo was a Sequence Editor window full of soundbites with names ending in .WAV. This may be nothing — perhaps MOTU just imported lots of WAV files for that particular sequence — but it did cause a few people to speculate as to whether DP's dependency on the Sound Designer II format might soon be over. Certainly an ability for DP to work natively with interleaved stereo files, especially AIFF and Broadcast WAVE, would mark a step in the direction of compatibility with other high-end workstation software.

The only other announcements made at NAMM concerned MOTU's expanding range of software instruments. An enhanced MX4 — Mk II — was on show, sporting an even greater range of modulators and shapers, a pattern gate, step sequencer, lag processor, arpeggiator and envelope follower. All good stuff, especially as it's a free update for existing MX4 owners, but it was somewhat overshadowed by Mach Five Mk II. MOTU seem to be going for the soft-sampler market jugular with this one, and the new features would certainly seem to keep it right up there with the competition. Import of Giga and EXS24 libraries has been improved, the audio engine has been streamlined for more efficiency, and much more inspiring synthesis options have been introduced, including better LFOs capable of modulating most parameters (including effects) and super-flexible envelope generators with unlimited breakpoints. Running as a plug-in, one instance of Mach Five can now load unlimited parts addressable via 128 MIDI channels, but it can also run stand-alone, in which case the cap on total MIDI channels is limited only by your MIDI hardware. Get those Mac Minis at the ready! Other nice features include a vastly improved file browser, full-page views of the sample and group editor, an integral mixer, the so-called Loop Lab, and real-time 'conform' options such as allowing a sample to be played back across a range of pitches without affecting its original duration.

A counterpart to Mach Five is the Symphonic Instrument, an 8GB library of orchestral sounds accessed via a friendly (though somewhat cheesy-looking) plug-in, and compatible with Mach Five. Priced at only $295 and including a G5-optimised convolution reverb, the Symphonic Instrument looks very promising, and certainly hots up the competition in what's becoming a crowded market.

Although MOTU's instruments are as yet only offered as extra cost 'add-ons' to DP, they represent an exciting step in DP's development, in that they inevitably offer superb integration and stability when running inside it, and increase DP's attractiveness as a 'one-stop' production environment in the wider DAW market. I wonder whether, at some stage this year, we might see a ' DP complete' bundle at around the price point of Logic Pro. That certainly would be an interesting proposition for the new (or wavering) DAW user. 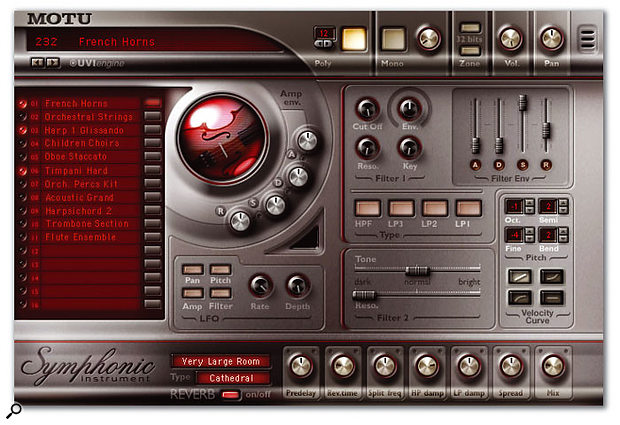 MOTU get some orchestral instrument sample action with the Symphonic Instrument.

As I mentioned in last month's Performer Notes, accurate tempo maps have long been the key to the ability to timestretch audio within a rhythmic framework, and are now an important part of effective quantising of beats within audio. If you recorded your audio to DP's click, it'll already have a good tempo map, but if you recorded it 'clickless' or imported it in a generic file format from another application it will either have an inaccurate tempo map or no tempo map at all. In these cases, Tempo Detection can be used to provide an accurate map, and is especially useful when you're working with longer sections of audio, or when the performance you've recorded has tempo fluctuations. Bear in mind, though, that in some cases it's still easier to use DP's Set Soundbite Tempo feature, especially for well-cut loops. In these more simple situations, Tempo Analysis can turn out to be a very complex sledgehammer for cracking a simple nut!

To give you an idea of where Tempo Analysis comes into its own, I'll consider a practical scenario: a multitrack recording of a band that was made 'clickless'. Let's imagine you've got a recording of a standard rock band line-up using 12 tracks. They recorded into DP 'clickless', so while DP has given all the soundbites tempo information, this information is inaccurate. Various members of the band wander a little out of time in places, so it would be useful to quantise some spots. The band have also announced that they now want to add a sequenced synth part to synchronise with their performance. Using Tempo Detection you should be able to achieve both these objectives — quantising where needed, and synchronising of a synth part.

The first step is to find a track in the audio that has an unambiguous beat. Kick and snare drum tracks are good for this, but you could also consider bass or even rhythm guitar as an alternative. If the track plays continuously from start to finish so much the better, but the following technique will also work for shorter individual soundbites within tracks. Do this for enough of them and you can derive enough tempo information for a whole sequence. Also note that Tempo Analysis is dependent on the soundbite already having been subject to beat detection, so if this hasn't taken place already you should open the Waveform Editor as a separate window, click on the Edit tab, and in the Beats mini-menu select 'Find Beats In All Files'.

Select your soundbite (we'll assume it's a continuous one) and choose 'Analyse Soundbite Tempo' from the audio menu. After DP has done its thing, make sure the soundbite is still selected and then choose 'Adjust Sequence to Soundbite Tempo' from the audio menu. This places the tempo information from the soundbite into the sequence's Conductor Track, and also switches the tempo control to Conductor Track mode.

At this stage your audio is playing back just as it was, but you've already almost done enough to achieve your objectives. All that remains is to go to the Sequence Editor, select all, and move all of the soundbites and Conductor Track data so that an audible downbeat in the music aligns with a downbeat in DP's time ruler (set to 'Measures' via the Time Format window — alt-option-T). Then, with everything still selected, you need to give all the soundbites a proper tempo map, by choosing 'Copy Sequence Tempo to Soundbites', from the Audio menu.

To tidy up those loose rhythmic moments, you can now just select the offending bits, open up the Quantise window, make sure you have 'Beats within soundbites' chosen in the 'What to quantise' mini-menu, choose a suitable time value, and hit Apply. As for the MIDI parts, they should just work with the new Conductor Track tempo information.

If you're thinking that all this seems too easy, you might well be right! Tempo Analysis is very dependent on the beats present in soundbites, so if there aren't enough of them it won't work. This being the case, you could define your own beats, as described in February's Performer Notes, or just try to get DP to detect more via the 'Adjust Beat Sensitivity' slider. The analysis can also be fooled by complex material, so you end up with an inaccurate analysis or an unnecessarily varying tempo map. Again, toggling beats on and off to get a more meaningful selection can help.

A DP 4.52 enhancement I'm particularly fond of is the revised behaviour of the Preview system for plug-ins in the Audio menu. Just to clarify, DP's audio plug-ins can be placed in Mixing Board insert slots, in which case they process audio in real time, or can be applied 'off-line' to selected soundbites via the Audio Plug-Ins sub-menu of the Audio menu. Applying effects off-line is great when you're running short of processor power, or indeed when you just know what you want, and is absolutely essential for the Reverse plug-in. But prior to DP 4.52, working with non-real-time effects was clunky — you couldn't tweak plug-in parameters while previewing the effect on your soundbite, so were forced to tweak, listen, tweak some more, listen, until you got what you wanted. Now, not only can you alter parameter values during preview, but DP loops your soundbite indefinitely, so that you don't have to keep hitting the Preview button — a real bonus for short sections. When you get the right sound, you just hit Apply, as before, or hit Stop if you change your mind.

DP 4.5 has some expanded Bounce to Disk functions. First there's the option to bounce to most major uncompressed audio file formats via Core Audio Export. But you can also bounce straight to MP3 after you've installed the LAME framework, which is not part of a DP 4.5 installation. To get this, visit www.pyehouse.com/lynn/lamework.php. Additionally, there's now a 'Save Bounce Settings' checkbox in the Bounce to Disk dialogue box. You can only make use of this if you're bouncing a time-range selection (so it won't work if you've only selected an individual soundbite, say), and it simply saves all the bounce settings, including file format, then allows you to name the bounce settings for recall later. This facility comes into its own when you want to bounce multiple mixes of the same sequence, or are developing a sequence and need to frequently send rough versions to a collaborator. Even if you don't save your bounce settings, you can still choose to 'Run Last Bounce Again' from the Bounce Settings sub-menu of the Audio menu. That alone will be a tremendous time-saver for many users.