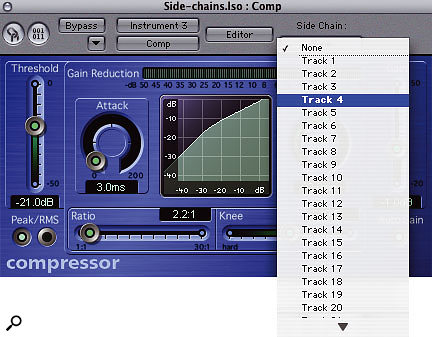 To assign any signal in Logic's mixer to a plug-in's side-chain, click on the Side Chain button which appears at the top of every suitable plug-in to access a drop-down menu.

Side-chains are usually associated with effects processing, but they are also available in many of Logic 's internal soft synths. So what can you do with them?

A side-chain is an auxiliary audio input to a synthesizer or effects processor. Side-chain audio is often used for some control purpose. For example, feeding a separate audio track to a compressor side-chain allows you to create ducking effects. With a synthesizer, on the other hand, Logic 's side-chain inputs are often used to process audio using the synth's filters and effects.

A number of Logic and Audio Units plug-ins offer side-chain inputs. When a side-chain input is available it is located at the right-hand end of the gray strip at the top of the plug-in's control panel. The drop-down menu under the Side Chain label allows you to select any Logic track, input, or buss as the source of the side-chain signal (as pictured above).

Let's start with a look at the Logic instrument plug-ins that support side-chains. These include the EXS24 sampler; the ES1, ES2, and Sculpture synths; and the EVOC PS polysynth-vocoder. The side-chain input on EXS24 and ES2 is strictly for modulation purposes. It can be selected either as a modulation source or as a modulation amount control (labelled Via) in either plug-in's modulation routing matrix. 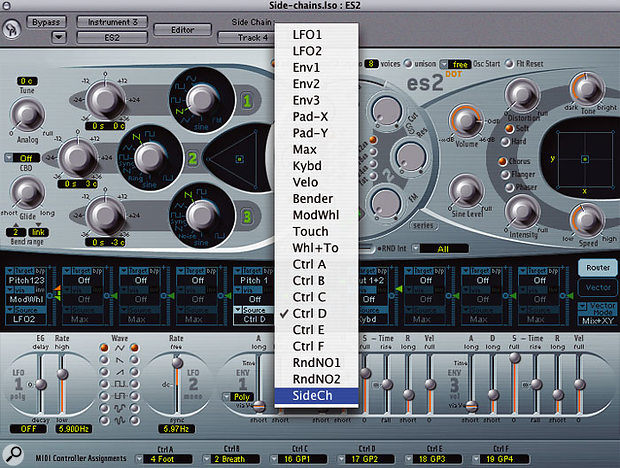 Side-chain control is possible within the modulation matrices of EXS24 and ES2 — in other words, any parameter can be modulated according to the level of incoming side-chain audio. You can also modulate the modulation depth for other control assignments using the Via field.

When the side-chain signal is used for modulation in EXS24 or ES2, it is not the actual audio that is used (as it would be, for example, in amplitude, frequency, or ring modulation). Instead the incoming audio is passed through an envelope follower which measures the level of the incoming audio and sends a control signal accordingly. You'll instantly get the idea if you use it as a modulation source, with Pitch as a Destination and the Via field left empty (off). 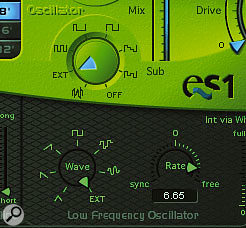 By contrast, the side-chain input on ES1 can be used as either an audio modulator or an audio source. It appears at the LFO's Ext input in the first case and at the Sub Oscillator's Ext input in the second. The audio can be used alone or mixed with the other oscillator, then passed through ES1 's filter and output envelope. As a modulation source, it's most effective when applied to filter cutoff, where it produces an effect similar to FM. 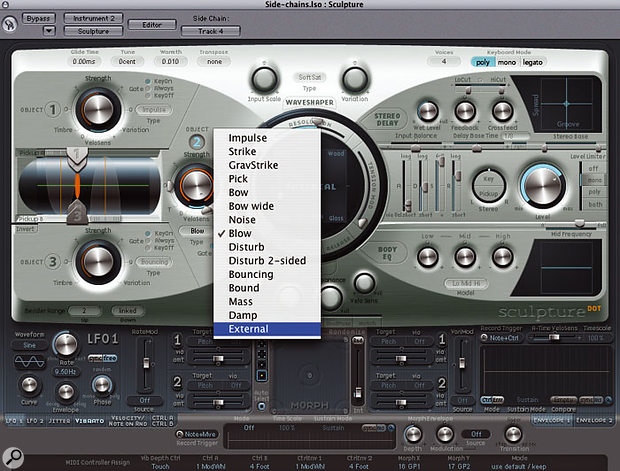 The audio from the side-chains of ES1 or Sculpture can be input directly into the synthesis architecture. In ES1, it can be used as the Sub Oscillator (as well as being usable as a modulation source via the LFO Ext position), whereas in Sculpture it can be fed to Object 2.

Logic 's vocoder, EVOC comes in three varieties: a vocoder with a built-in polysynth (EVOC PS), a vocoder with a pitch-tracking oscillator (EVOC TO), and a flexible filter bank. The first two offer side-chain inputs, with differing uses. EVOC PS is an instrument plug-in and is probably the most familiar vocoder model: MIDI input plays the polysynth, and the side-chain is used for the program (usually speech) input.

EVOC TO is an effects plug-in which takes one audio input from the track on which it is inserted and another from the side-chain input. Either input can be analysed by a built-in pitch-follower to control the pitch of the built-in tracking oscillator. Alternatively, the tracking oscillator can be replaced by either audio input. Finally, either audio input can used as the analysed (speech) signal.

Five of Logic 's dynamics-processing plug-ins have side-chain inputs: Compressor, Expander, Noise Gate, Silver Compressor, and Silver Gate. In all cases the side-chain inputs are analysed for level using an envelope follower, then compared with the Threshold setting to determine whether to apply the effect and how much. In the case of the compressors, the louder the side-chain signal, the more the track signal is compressed — that is standard ducking. For the gates, just the opposite applies; louder side-chain signals open the gate. The expander works like the gates, except that the track signal changes level rather than simply being gated on and off. 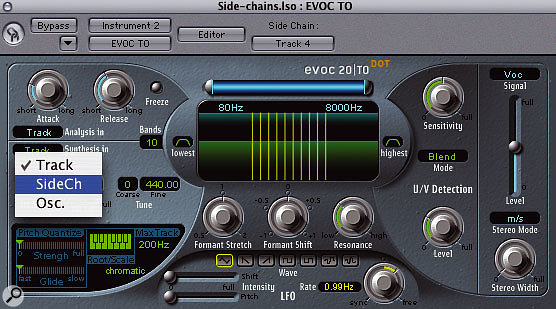 Some effect processes require two separate input signals to operate at all, among them vocoding and ring modulation. In Logic the EVOC TO vocoder and Ringshifter ring modulator both have internal sound generators to allow usable results when processing single instruments, but the best results come from experimenting with the side-chain possibilities.

Side-chain inputs are also available for three of the filter effects: Autofilter, Match EQ, and Fuzz-Wah. Autofilter is a low-pass filter plug-in whose filter cutoff frequency can be modulated by a built-in ADSR envelope generator and LFO. The side-chain input is passed through an envelope follower and can then be used to trigger the ADSR envelope.

Fuzz-Wah adds a distortion phase to the wah-wah effect from the EVD6 clavinet plug-in. The side-chain is used, again with an envelope follower, to control the motion of the wah-wah filter. Setting the side-chain input to the same track into which the Fuzz-Wah is inserted results in a true auto-wah effect, but other side-chain sources give interesting results as well.

The last Logic plug-in to feature a side-chain is the Ringshifter. That is a combination ring modulator and frequency shifter. In ring-modulator mode, the side-chain can be used as the modulating signal instead of Ringshifter 's built-in sine-wave oscillator. Audio Units plug-ins frequently have side-chain inputs as well. Notable examples include Elemental Audio's Neodynium Compressor, Native Instruments' Reaktor and Vokator, and U-he's Zebra synthesizer. A number of synth manufacturers also include effects versions of their synths. The advantage to using a synth with a side-chain is that the synth can be controlled by MIDI notes, whereas an effects plug-in can not.

The next time you insert an instrument or effects plug-in and notice that little side-chain menu at the top, don't ignore it. It's the key to lots of interesting processing alternatives.