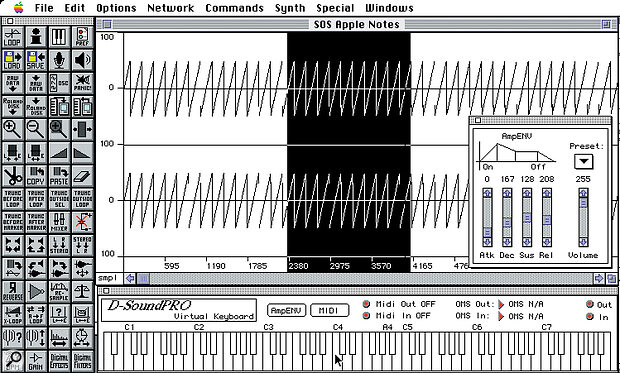 Martin Russ checks out some worthwhile shareware, explains the benefits of registration, and nudges his mouse...

The past year has seen the ever‑expanding processing power found inside computers being employed in several software synthesizers, such as Seer Systems' Reality and Native Instruments' Generator. From a MacOS viewpoint, these two are something of a disappointment: both are Windows‑only at present. So, although I've previously mentioned MacOS software such as Out of Phase and the BeOS‑based Audio Elements, the DIY synthesis world has looked pretty empty except for some very complex academic outposts with steep learning curves (which we could start to look at next month, perhaps...).
Actually, though, there's an interesting little bit of convergent evolution going on in this area, and this fact also gives me a chance to remind you about the latest release of what can only be described as a remarkable bargain. As you may have noticed, now that digital audio or sample editor applications have done all the waveform editing, looping, cross‑fading, time‑stretching, stereo sample provision and digital effects processing that their programmers can think of, those programmers have turned towards creating sounds from scratch. <br clear="left">

Version 3.5 Beta of Stephano Daino's continuingly excellent D‑Sound Pro is described as a 'Sound Editor', and it does all of the aforementioned sample manipulations, and more. But it also has started developing in a different way, with Stephano gradually moving wishes from his list of future plans and turning them into software reality. I used the first incarnation of his software oscillator for generating some of the examples on the forthcoming Sound Synthesis & Sampling CD‑ROM, to accompany my book of the same name, but this new release takes things quite a bit further. There's now a dual oscillator that lets you beat two detuned waves together, plus a 10‑oscillator Additive Synthesis‑orientated bank with simple and very rapid frequency ratio controls.

The digital filtering is brand new, and allows you to play with low‑pass, band‑pass, high‑pass and band‑reject analogue filter simulations, with feedback up to self‑resonance, and with two, four, six or eight poles providing cut‑off slopes of ‑12, ‑24, ‑36 and ‑48 dB/octave. Trying out the 8‑pole filter could be particularly enlightening for those 'raised on 4‑pole' VCF people who assume that more poles are automatically better — my vote is still for the four or the six. There's also full parametric EQ (Frequency, Q, Gain) and a 7‑band graphic EQ (+/‑ 18dB) and modulated time‑based DSP effects such as chorus, and reverb with early reflections, to complement the existing DSP time‑delay‑based echo effects. Support for SCSI sample dump for the Yamaha A3000 and Akai S2000 has been added, along with various minor bug fixes and code speed and memory management optimisations. Finally, there's a new 'Detect BPM' function, which attempts to extract the tempo from an audio file, and is very useful for reworking sample‑based music.

The combination of the multiple oscillators, filtering (not dynamic at present, but give Stephano time...) and the AmpENV ADSR envelope shaping gives the beginnings of a 'Virtual Synthesizer' inside a very capable digital audio editor. There are some problems with the ADSR envelope‑shaping causing zipper‑noise‑style clicks when using this technique, but this is a Beta version, after all!

D‑Sound Pro is shareware, and costs a mere $39, or $10 for an upgrade. The equivalent of £25 makes this an absolute bargain, and a wonderful way to start exploring digital audio on your MacOS computer. Registration is easy, and uses the increasingly popular Kagi system (see 'Registration' box). As a long‑time advocate of shareware, I can't think of a better advert for it than D‑Sound Pro. 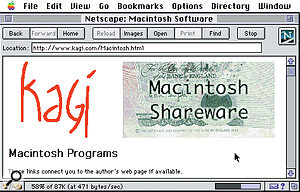 Kagi are one of the leading shareware registration organisations.

D‑Sound Pro can be found at any of the following locations:

With many sound, music and MIDI applications for the Mac appearing on cover CD‑ROMs, you might be mistaken for thinking that the Internet is a non‑essential luxury. But for the latest version and the most recent features, you gain by downloading directly. As an example, Version 3.1.2 of D‑Sound Pro was available on several Mac magazine cover CD‑ROMs as I wrote this, while the 3.5 Beta has been available on the Internet since the 18th of February this year.

Tip Of The Month: Nudgemouser 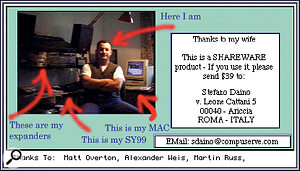 Registration may not get you a mention, but it gets your money to the programmer. Would you rip this man off by stealing his software?

NudgeMouser is one of those tiny utilities that you drop into your System Folder, and then it becomes such an intrinsic part of the way your MacOS computer works that you get a shock when another computer doesn't have it! All it does is allow mouse movements to be controlled from the cursor keys on the keyboard when you hold the mouse button down. This is incredibly useful when selecting parts of screenshots, or at a zillion other times when the mouse is just too clunky for the pixel‑accurate control you need, like editing audio samples, perhaps? It's available now via the Internet (www.patchdance.com/shareware.html) and maybe even from a cover CD‑ROM by the time you read this.

The International Standards Organisation (ISO) has adopted Apple's QuickTime as the basis for MPEG‑4, the forthcoming object‑based unified open digital media storage format (which, in non tech‑speak, means that it is a freely available way for anyone to store any sort of media: audio, video, graphics, animations, and so on, as a linked group of bits and pieces in a single file). Due by the end of 1999, MPEG‑4 is intended to be an all‑encompassing multimedia format rather than having the video bias of the existing MPEG 1 and 2.

High‑end 3D graphics magazines are currently running adverts for purple towers which are described as being 'Mac Friendly'. Intergraph's ExtremeZ graphic workstations are designed to connect straight into Mac networks, and to be able to use the same software applications and media. Inside are two Pentium II 300MHz processors running Windows NT, with accelerated graphics for fast rendering. I'm not sure whether to feel flattered or frightened...

One of the major advantages of registering shareware is that you get into direct contact with the programmer, and sometimes you even get a credit if you find a bug or make a neat suggestion. Mentioning software in music magazines is also appreciated, as you can see from the D‑Sound Pro 'About' box. Services such as Kagi (www.kagi.com) help you register shareware you find on the Internet, freeing the authors of shareware from registration admin work.