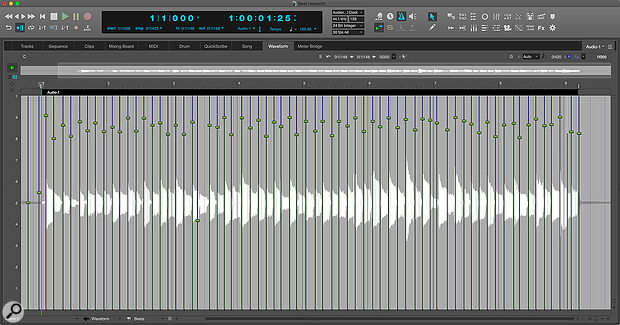 Digital Performer has long had excellent features for manipulating beats and tempo. With the arrival of DP10, those capabilities have been significantly upgraded. This month we'll look at some tips for using DP's beat-detection, time-stretching and tempo-related features.

The new Stretch Edit Layer, which is available in both the Sequence Editor and Waveform Editor, takes advantage of the new Beat Detection Engine introduced in DP10 to offer additional functionality for editing beats and changing tempos.

You can turn on Stretch functionality for an audio track by going to its Track Settings Menu in the Sequence Editor and selecting Stretch. Even if the audio you're importing doesn't have embedded tempo information, DP will automatically conform the audio in the track to fit the project tempo. This feature will work whether you're using the Tempo Slider or the Conductor Track.

The most obvious use for setting a track to Stretch is to bring in sounds from outside the project, such as loops, and conform them to the project tempo. If you Stretch-enable all the audio tracks in a project, you can freely change the project tempo; all the tracks will automatically adjust along with the changes. Stretch will even follow multiple tempo changes in the conductor track. The quality of the ZTX Pro time-stretching technology that DP employs is excellent and flexible, so it can be applied to all types of audio material.

DP's Beat Detection Engine is smart enough to be able to figure out a tempo from beats even when it's showing intricate patterns of transients.

You can use the Stretch capabilities of audio tracks, in conjunction with the Conductor Track, to program in tempo changes, such as a ritardando or accelerando, or to just add some slight tempo variations into a song recorded to a click. This gives you a lot of arrangement flexibility in a mix or remix situation. To do this, first check that all your audio tracks are set to Stretch in the Track Settings Menu. Next, make sure your tempo is being controlled by the Conductor Track. If not, make a note of the song's bpm setting, and hold down the disclosure arrow to the right of the Tempo Slider and change it to the Conductor Track. 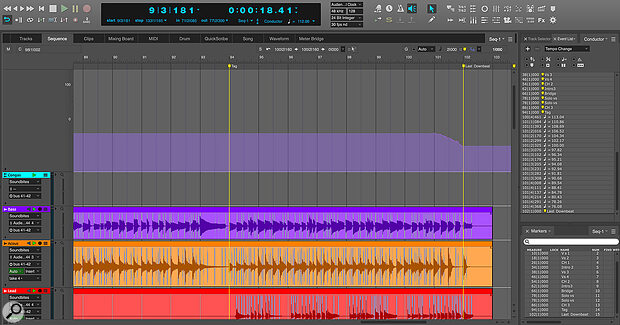 When Stretch is enabled on audio tracks, you can add tempo changes in the Conductor Track, such as the ritardando at the end of this song.

Next, find the spot in the song where you want to change the tempo. Say you want to add a ritardando in the last measure, ending on the last beat. Go to Project / Conductor Track / Change Tempo, and use the Change Tempo dialogue box to program the change in. Alternatively, you can use the Pencil Tool and draw it into the conductor track. Hit Play and you'll hear all the audio and MIDI tracks follow the tempo change. Adjust as needed.

A Stretch In Time

You can also manually stretch beats to correct or change a part, either in the Waveform Editor, which has been reorganised and spruced up in DP10, or in the Sequence Editor. The process works best for small corrections. Once you start dragging beats too far, you'll notice degradation of their transients and impact the timing of surrounding notes. One thing that helps is to experiment with different Snap-to-Grid settings when you're making the adjustments. The larger the note value in the grid, the more any stretches you make will impact surrounding beats. 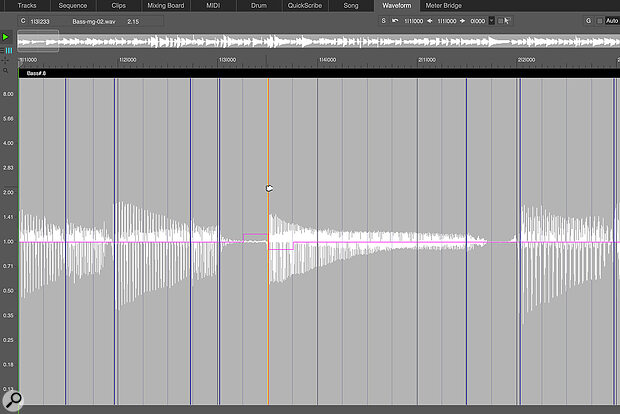 Using the Stretch Edit Layer, you can manually drag audio in time to make changes or corrections to the rhythm.

Beats are bordered on either side by a red line that represents their Anchor Points. You can move these around if you need more control over what gets stretched on either side of the beat. Hover over the line until you see a bi-directional arrow, and then drag in either direction.

Another option for time-correcting beats is to use the Region / Quantize / Beats Within Soundbites command, which allows you to quantise both audio and MIDI material together in one operation. Just like with quantising MIDI, the key to successful results is to set the parameters such as Grid Value, Sensitivity and Strength, so that you get just enough time correction without removing the feel.

An alternative method for manipulating beats is to use the Audio / Audio Beats / New Soundbites option from the Beats menu to create new Soundbites based on the audio beats in the original. These new Soundbites will start precisely on their initial transients. 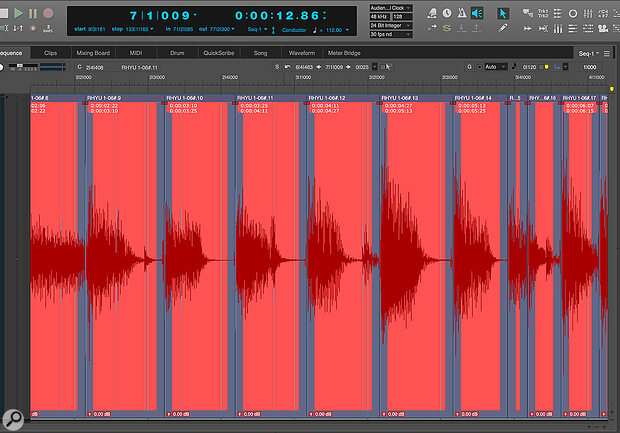 Using the New Soundbites from Beats command, a single Soundbite has been cut into many smaller ones, all starting right on the beat.

When you select New Soundbites, you'll get a dialogue box with a Beats Strength Threshold slider, which will adjust the sensitivity of the beat detection. If too many beats are being detected, push the slider more to the right.

From there, you could use the Quantize command set to Soundbites to correct or change the part. Or you could drag the newly separated Soundbites manually to where you want them. Another reason to make Soundbites from the beats is to create samples to load in a sampler instrument such as DP's Model 12.

You can also switch the Waveform editor to show beats, and edit them if needed, before separating a Soundbite by its beats or using another beat operation. You can even raise and lower beat velocity, which will impact which beats are detected when you increase the threshold. Drag the handles on the beats down to reduce their velocity. You can also add beats with the Pencil Tool or delete them with the Mute Tool.

Remember that, unlike the Stretch layer in the Waveform Editor (or Sequence Editor), editing beats doesn't alter the audio directly. What you're editing is a map of the positions of the beats in a Soundbite, which DP will use as reference when performing beat and tempo operations.

Another trick the Beat Detection Engine can perform is to covert beats into MIDI information. To do this, select the Soundbite with the beats you want to convert and go to Audio / Audio Beats / Copy Beats as MIDI. 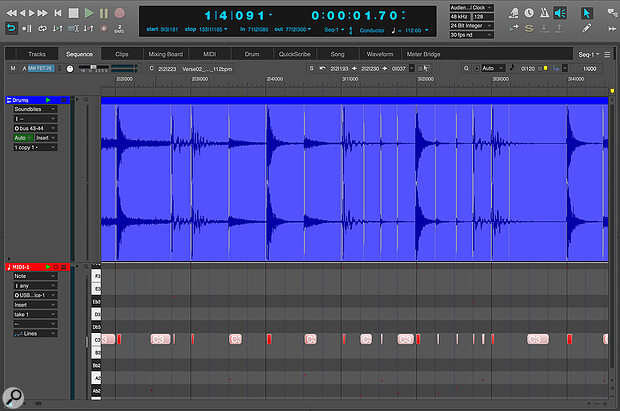 The MIDI notes in the track here were extracted from the drum track above them using the Copy Beats as MIDI command.

You could use this function in several different ways. Say you've got an audio percussion track that has a nice groove to it, but the sound or instrument is wrong. You could convert it to MIDI and use a sample of a different percussion instrument. Bear in mind, though, that because beats have no pitch information, the MIDI track you create with the Copy Beats as MIDI command will all be on one note: C3. You'll almost certainly have to go in and do some editing of the pitches to get them to trigger the desired sound.

You could even use it on an audio drum loop that you want to convert to MIDI. The transposition would be time-consuming for a song-length part, but if you're just converting a loop of a few bars, it only takes a minute or two.

You can also tap into the power of DP10's new Beat Detection Engine to create a click track and grid for a piece of music recorded with no tempo reference. The process works best on music with a prominent tempo and without rubato sections. For this operation, open a new sequence, and import the mix onto a new track.

If the music in your file has a pickup, so that the first hit isn't on beat 1, you're best off temporarily cutting the Soundbite to remove the pickup. In order to make the tempo-detection process line up with the measures in the timeline, the downbeat of the first full measure of music needs to start at the beginning of a bar. 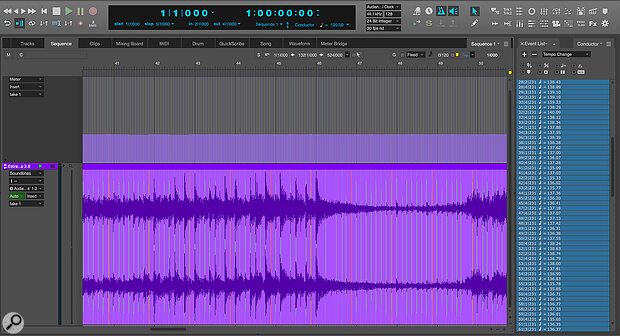 The tempos on the right were calculated by DP to create a tempo grid for this song, which was recorded without a click.

Cut right on the line indicating the detected beat, then place it at the beginning of the measure where you want it (typically 2:1:000). Make sure that it's precisely located by opening the Event List for that track and, if necessary, typing in the correct location.

DP's Beat Detection Engine is smart enough to be able to figure out a tempo from beats even when it's showing intricate patterns of transients. Just because you see a considerable number of beats inside a measure, that won't necessarily create problems for tempo analysis. That said, there are some songs where you'll have to do some additional editing. You might need to insert meter changes to match any that may be in your song. You also might find that DP analysed your song's tempo correctly but made the click twice as fast or twice as slow as you want a quarter-note value to be. In those situations, try selecting Audio / Audio Tempo / Halve Soundbite Tempo, or Audio / Audio Tempo / Double Soundbite Tempo.

You can do further manual adjustments, if necessary, using DP's Adjust Beats feature, which is accessed via Conductor Track / Adjust Beats.